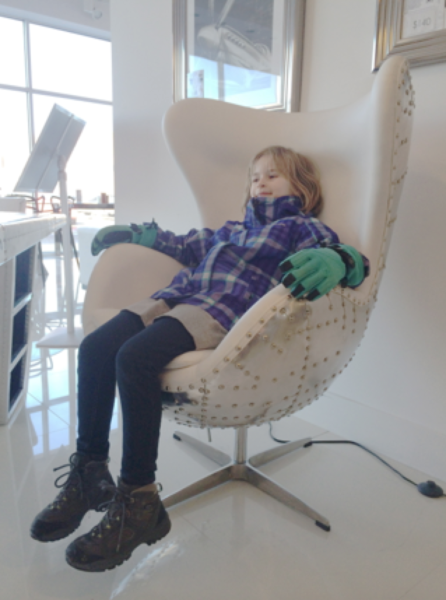 At the mini mall where I buy my art supplies, next to Starbucks and Whole Foods, there are two design furniture stores to supply the well to do urban area where we live.

In the window display at Design Within Reach is a Fritz Hansen Egg chair, designed by Arne Jacobsen for the Radisson SAS hotel in Copenhagen in 1958. Originally produced in green wool, the most popular model, like the one it the window, was upholstered in black leather.

In the adjoining shop window, they have a very similar chair. It is an egg-shaped swivel lounge chair in white leather with curvy lines and a star shaped aluminum base. The outside of the shell is covered entirely in aluminum, riveted together with chunky bolts, giving the whole thing a patchworked steam-punk-Barbie-in-an-Amsterdam-hair-salon aesthetic.

My daughter, who just turned eight, thinks this chair is dreamy. I think it is an abomination. But Iâ€™m having a hard time explaining to her why, and why this is a bad thing â€”after all one womanâ€™s homage is another womanâ€™s pimpingâ€”and we canâ€™t even just err on the side of good taste.

Beyond the field of good and bad taste is the boundary of the shocking, and out thereÂ  Â Allen Jonesâ€™ Chair is back in style –in Bjarne Melgaardâ€™s pimped up â€œretoxifiedâ€ version of it — now available in black.

â€œThe racist chairâ€ as it has been dubbedâ€”because now it is apparently the chair that is racist, not the artist who made it, not the patron who bought it, not the editor who published the photo which is currently being circulated, not the context of the international art elite (â€”who already included Jonesâ€™s original into our canon as part of the TATEâ€™s permanent collection. A Pop art classic. )

This abstract statement makes me wonder about the democratic implications of making one half of the population accessible as furniture for the other half, but off course Iâ€™m no expert on democracy.

If the image of a rich, beautiful white lady perched on top of a contorted busty black woman in bondage sits uncomfortably, it could be because it reminds us of how comfortable we have become with the idea of our bodies being commodified, black and white, black by white, female and male, female by male.

The Russian art world super nova Dasha Zhukova, for it is she in the picture, claims that the outrage over the picture was caused by it being â€œpublished completely out of context,â€. Â She claims that it is in fact â€œa commentary on gender and racial politics,â€ implying that in these international art world matters, she is the expert and we, the internet mob, are not. That we donâ€™t get it.

Melgaardâ€™s art-world buddies have come to his defense, one of them claiming that: â€œHe is not racist. He even dated a black man,â€. But, like with Jonesâ€™ defense of his original when he said, â€œI love women. I was using misogyny ironically!,â€ you can love and debase somebody at the same time. Forniphilia (human furniture) is a fine example of this.

That is called pimping.

No stranger to pimping, Melgaard in fact started off his career with (beautiful) watercolors of himself jerking off on the grave of his idol, Paul Gauguin, it is hardly surprising that he has not apologized as much as philosophized about the incidence. His press statement, released to Art Info through Gavin Brown enterprise, ends with the following:

We see this photograph to be extraordinary. We see this debate to be a distraction from the true challenges that face us. We applaud both the sitter and the seated. To fault the sitter, now in the age of the Anthropocene, in the midst of enormous and REAL obscenities that threaten our actual existence, reflects a civilization that is not dying but already dead. Turn your outrage upside down.

This reference to the â€œage of the Anthropoceneâ€ basically means: this is nothing compared to global warming. But the statement skirts around the fact that global warming is the result of an economy that hinges on the continuous commodification of bodies. The REAL obscenity in this context is the business as usual of employing the â€œend of historyâ€ rhetoric by those who consider themselves â€œwinnersâ€ â€”feminists are not â€œdoneâ€ with history, nor is the civil rights movement –but Melgaard in his statement turns the moral responsibility for this upside down.

To a certain point he is entitled to this position –after all artworks can operate in this field beyond moral good and bad, because of their dual relationship with form and content â€“artistâ€™s statements, on the other hand, cannot since they are only really dealing with content.

PimpingÂ  (like irony) in a sense relies on the knowingness with which we acknowledge the relationship between form and content, and how we are able to destabilize it, in the knowledge thatÂ  (to use Melgaardâ€™s phrase) both the sitter and the seated â€œgets itâ€, although it does not always sit comfortably.

Recently Miley Cyrus was given a fair amount of push back for pimping a content she didnâ€™t entirely get both in the form of the Afro American phenomenon of Twerking as well as the feminist legacy of Sinead Oâ€™Connorâ€™s shaved head. In Rolling Stone Magazine Cyrus explained how her Wrecking Ball video is a tribute to Oâ€™Connorâ€™s majestic crying game, Nothing Compares To You:

IÂ wanted it to be tough but really pretty â€“ that’s what Sinead did withÂ her hair and everything. The trick is getting the camera up above you,Â so it almost looks like you’re looking up at someone and crying.[2]

Oâ€™Connor called her out and replied with a talking to in the â€œspirit of motherlinessâ€:

It is in fact the case that you will obscure your talent by allowing yourself to be pimped, whether itâ€™s the music business or yourself doing the pimping.[3] [â€¦] The look I chose, I chose on purpose at a time when my record company were encouraging me to do what you have done. I felt I would rather be judged on my talent and not my looks. I am happy that I made that choice, not least because I do not find myself on the proverbial rag heap now that I am almost 47 yrs of age… which unfortunately many female artists who have based their image around their sexuality, end up on when they reach middle age.

Mileyâ€™s response was to repost Oâ€™Connorâ€™s two-year-old tweets, in which she calls for help in treating her mental malady and suicidal impulse, along with an old photo of Oâ€™Connor tearing up a picture of the Pope on Saturday Night Live.

(Not getting how absolutely radical that gesture was at the time, and still is. How could sheâ€”she wasnâ€™t even born then! But some of us remember.)

Proving, if nothing else, Oâ€™Connorâ€™s point about the pimping.

But, as I was hinting in the beginning, one womanâ€™s pimping is the other womanâ€™s homage– after all there is no pimping without love.

To that point, I must confess I love that song, which hums like the pimped up cyborg love child of Jamesâ€™ Browns Sex Machine and David Bowieâ€™s TVC 15, even if Iâ€™m told that Robin Thicke is the new exterminator in the â€œWar On Women,â€ but I donâ€™t love Miley Cyrus enough to go to one of her concerts.

Instead, I went to see Sinead Oâ€™Conner when she was passing through town, and although it was weird sitting in that winery surrounded by middle aged fans like myself, when the lights dimmed and she took the stage she was as bald and as beautiful as ever. She was wearing a low cut washed out shirt that read â€œRasta at Heartâ€. I started dreaming about egg chairs in red, gold and green wool upholstery.