“What Does It Mean?”

“What does it mean?” This question predictably looped throughout my 20 years as an educator at the Museum of Contemporary Art Chicago (MCA). It’s a good enough question and it defies a simple answer. Like the numerous images in a hall of mirrors, a single work of art generates multiple meanings. It means what the artist intended when they created it. It takes on different meanings when paired with other artworks in an exhibition and when used to support a specific curatorial premise. And it takes on new meanings when your unique background and experiences color your interaction with it.

The state’s stay-at-home order closed the doors of the MCA to visitors and to the collaboration with institutions and artists that makes exhibitions possible. In response, MCA created a show using artworks from the collection. Just Connect, which opened in mid-July, features artworks that explore how we connect—with ourselves and others, as well as with the world around us. With thematic sections including “the space around us,” “alone together,” and “longing and loss,” the exhibition illustrates the ways context influences the way we interpret art. All the works in the show date before the onset of COVID-19, so none of the artists were intentionally addressing the pandemic, yet all of the works can be interpreted in its light.

Sharon Lockhart takes photographs of everyday life that she elaborately stages, questioning the truthfulness of photographic representation.  She typically presents her photographs in series, asking us to detect subtle differences between the images.  That’s the artist’s intent.

When you see Maja and Elodie (2003) it’s easy to assume, “They are doing a jigsaw puzzle!”  Puzzling was a natural pastime during stay-at-home orders.  So many puzzles were purchased, completed, photographed, and shared that newspapers reported shortages; manufacturers couldn’t keep up with the demand.

The photographs depict a woman, Elodie, interacting with Duane Hanson’s hyper-real sculpture Child with Puzzle (1978) that features his daughter, Maja, as the model.  The two images are identical except that in the right panel, Elodie has lifted her hand to move a puzzle piece which casts a slight shadow and suggests the passage of time. 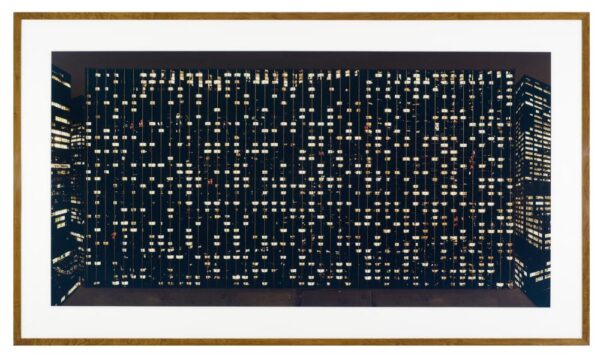 Like Lockhart, Andreas Gursky questions the truthfulness of representational photography.  He creates large-scale images whose subjects are equally significant.  Gursky manufactures his images by digitally combining multiple photographs of the same subject shot from different angles, a technique that results in a view that can’t be seen naturally by the human eye.  Because they are manipulated, his photographs don’t document society, but represent it.

The work’s title, Avenue of the Americas (2001), gives us a clue as to the subject:  the Hilton Hotel and Towers at Rockefeller Center on Sixth Avenue in New York, taken at night from 53rd Street.  By stretching the image horizontality and flattening the depth of the picture plane, Gursky’s photograph looks like a grid.  Devoid of humanity, but showing signs of its existence in the lit rooms, the photograph resembles the empty streets of New York shown on the news when the city was eerily empty. 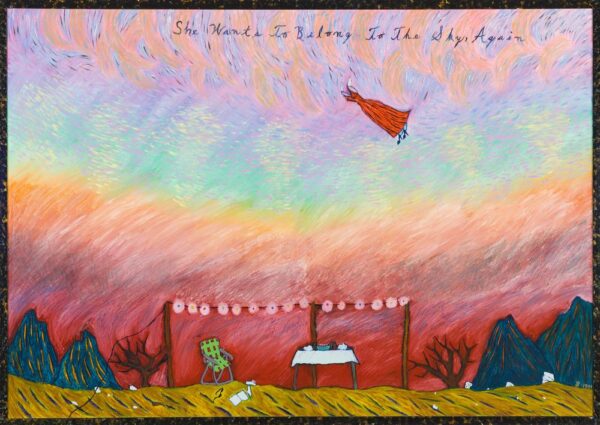 As with Gursky’s photograph, people are nowhere to be seen in Hollis Sigler’s She Wants To Belong To The Sky, Again (1981).  There are signs of recent human presence:  an abandoned lawn chair, sunglasses, gym shoes, and book; a table with colorful bowls and napkins.  While the painting suggests loneliness, the bright colors and festive lights, along with the outdoor scene, hint at activities newly available this summer.  The red dress floating above could represent the desire to escape today’s restrictions or more sadly, those who have lost their lives to the virus, as the title and writing suggest.

While the scene has a unique interpretation in the context of COVID, Sigler created the red dress as a stand-in for a part autobiographical, part fictitious, character named “The Lady,” who longed to escape from the constraints of everyday life.  The domestic objects and fancy attire all hint at women’s work and appearance, with a nod to feminism.  Sigler intentionally painted in a naïve style, saying: “I want the content to be more important.  I didn’t want people getting caught up in the technique of drawing or seeing.  I wanted them to know it was psychological space and I was tired of people being caught up in how well I could draw.  I wanted them to see beyond that.” 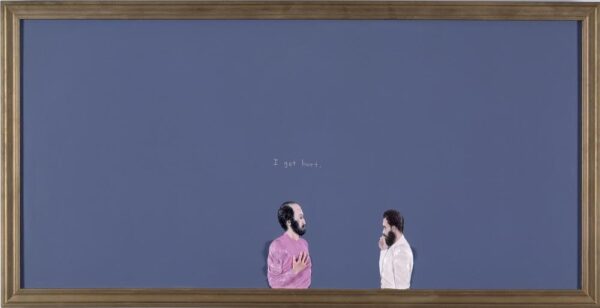 Nicholas Africano’s I Get Hurt (1980) is as emotionally-charged as Sigler’s painting but he includes humans while removing any type of recognizable environment.  Interpreted in the context of COVID, with quarantine circles and isolation orders in place, the emptiness is palpable.  People are likely feeling or saying “I get hurt” from time to time.

Africano’s self-portrait is on the right; his friend Rodney Ripps is on the left.  The scene exposes the vulnerability emotional honesty can trigger.  Africano says the painting is about the absurd importance we place on intimacy: “…moments when you are called upon to feel a certain thing and you find yourself incapable of feeling what you ought to.”  However, numerous other interpretations are equally valid, based on contextual cues and personal experiences.

The artworks in Just Connect at the MCA remind us to connect with art, with ourselves, and with others, especially now.  The exhibition demonstrates how responses to art arise from the varied contexts in its making and reception.  Artists working today continue to create, both in response to and independent of, COVID-19.  Certain works will mark this historic moment in time; all will have changing interpretations that cause us to ponder “What does it mean?”

Susan J. Musich spent twenty years as an educator at the Museum of Contemporary Art Chicago communicating fresh perspectives to non-specialist audiences.  This perspective infuses her writing about art.