The Reality of Rejection

Even before seeing the work I wanted to write about Best of the Worst, the recent exhibition at the Practice Gallery in Philadelphia. The title is amusing and the concept clever– a gallery full of artists who’d previously been rejected from a Philadelphia summer juried show. For ten bucks, a rejection letter, a hope and a prayer an artist can join fellow castaways in a salon style showcase. How could I not be intrigued to see a collection of pieces which, when hung together, personify the agony of rejection and the victory of inclusion?

Practice has a small, brightly lit gallery that normally hosts solo exhibitions that focus on experimentation, video and performance. Best of the Worst deviates from Practice’s normal programming by completely covering it’s walls with predominantly two dimensional work. The show also contains sculptures, videos and mixed media pieces that line the floors, walls and the ceiling. The presentation is chaotic, lacking cohesiveness and leaving the viewer overwhelmed with visual choices. For any other show concept those remarks would seem scathing, but in a show trying to maintain inclusiveness it feels appropriate to not have a clear direction. The lack of relationships between pieces and the variety of concepts highlight the subjectivity of a curator choosing between work that was curiously rejected from other juried exhibitions in the first place. 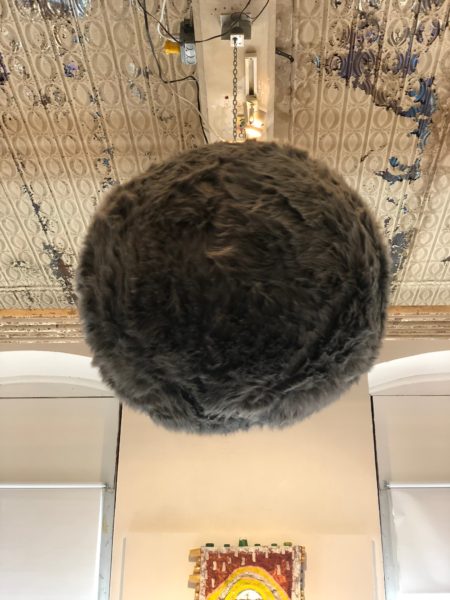 There are many glowing pieces in the show. A large, playfully spinning fur covered disco ball both contemporary and dada inspired by Amy Cousins. Coffee Table with Things by Annson Conway stands out for its comic inspired aesthetic mixed with functional form. However, my favorite object in the space did not come from an artist, it came from the gallery– A green binder that includes rejection letters received by the artists. When skimming through the pages a pattern emerges. Most of the letters are rejections from other galleries that reside at the 319 N. 11th St. building. Repetition of the names Vox Populi, Napoleon, Automat and others provide a tongue and cheek gesture to kin galleries while also creating a sobering reminder of the unwritten contract artists make between the Arts and capitalism. 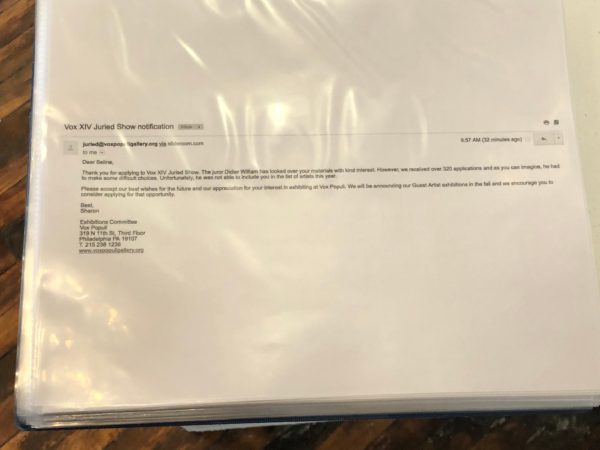 Acceptance equals Success. Rejection equals Failure:
The common narrative of a successful artist is usually a fictional tale of solo stardom that is randomly granted to only a few truly unique individuals. Working as an artist, that narrative quickly dissolves into a reality that has as much to do with talent as it does hustle and finances. The price of visibility is normally high. Application fees, travel, networking, UNPAID internships, volunteering, higher education and many other costly or time consuming practices that might yield success. To be accepted into a juried show someone needs to have the access to technology, a CV that proves others took chance on the work, and an application fee. The applicant also has to hope the work conforms to the jurors desired medium and interests. These barriers, though sometimes appropriate, create inaccessibility. The structure to success is often exclusionary, which seems counterintuitive to how most art wants to function.

Of course there are exceptions to the rule but highlighting those few who have “made it” not helpful to everyone else. In reality the Art World operates like any other business, with the artists being the workers. The value of an artist or artwork is still closely tied to popularity, production and wealth. As artists try to maintain the idea that we work outside of capitalism’s dictation that value is determined by financial worth, it’s easy to think of not succeeding financially as a personal failure. When an artist is subjectively accepted into a show, gallery, school or residency, the time and money seem like a worthwhile exchange. Conversely, since the production of art is viewed as an individual pursuit when that time and money yields rejection it feels more like a confirmation that an artist is failing at being themselves.

Doing the Best while Feeling the Worst
The capitalist relationship that artists have with art spaces is an open secret, often complained about and rarely challenged. It is difficult to think of ways for Art to disassociate itself from this skewed value proposition, especially when the feeling of being accepted into something exclusive is euphoric. The rejection on the other hand can feel like a personal hell. No matter how many times someone says, “the process is subjective” or a letter received reads, “this years pool of applicants was competitive” it is hard to stomach the idea that hard work does not mean acceptance. That is one of the lies of capitalism that artists accept, work hard and be rewarded. It is impressive that many artists keep persevering when each missed opportunity feels like one step away from actualizing a dream.

Best of the Worst as a show has its pitfalls. As a gallery known for experimentation, Practice Gallery didn’t take many risks in the curation, choices or display of the work. However it does successfully remind artists that we are not alone in this struggle for visibility and value. What is important about this exhibition is the conversation it contains about a system that is not always fair and feels convoluted. The only way we change the way artists and art are valued is to discuss our participation and what we lose through our desire to be accepted.