Bumping Into Sculpture at EXPO Chicago

Barnett Newman famously observed that “Sculpture is what you bump into when you back up to see a painting,” poking fun at sculpture’s secondary status in the eyes of many art lovers. Though painting was definitely king at this year’s Expo Chicago —with a veritable sea of canvases flooding the gallery booths — nestled among them was a wealth of dynamic, compelling sculpture in a wide range of styles, materials and ideas.

Just inside Festival Hall, a group of tall, masked figures by Magdalena Abakanow seemed to stand guard, sentinel like, over the artwork around it. Nearby, three of Jaume Plensa’s narrow, contemplative heads rested, eyes closed, providing a quiet counterpoint to Abakanow’s work. The prominent placement of work by these artists was fitting, as both have strong Chicago ties (Abakanow created Agora, the group of 106 headless and armless iron sculptures at the south end of Grant Park and Pleansa, Millennium Park’s Crown Plaza). 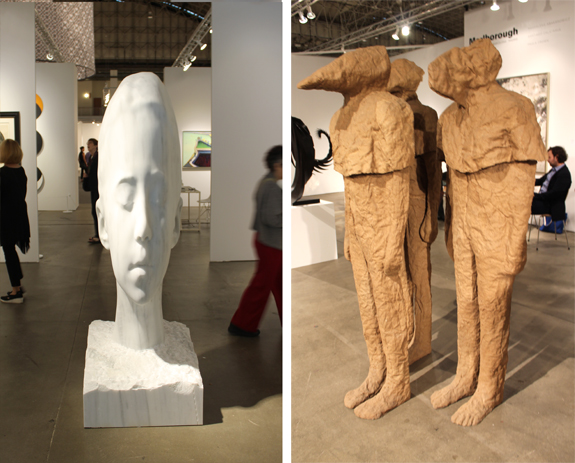 Work by Jaume Plensa (left) and Magdalena Abakanow (right). Photos by the author for Bad at Sports.

Perhaps less familiar to Chicago audiences was work by Anuar Maauad. His thick, rough-hewn figures, on display at Efrain Lopez Gallery in Expo’s EXPOSURE section allude not only to Abakanow’s sculptures in their absence of facial and bodily detail but also to classical sculpture with subtle postural gestures such as a bent knee and a hint of contrapposto. Visible tool marks and lines demarcating sections of the sculpture break up the surfaces and create a captivating play of light and shadow. As with Abakanow’s work, Anuar’s surfaces are as vital as the forms themselves. 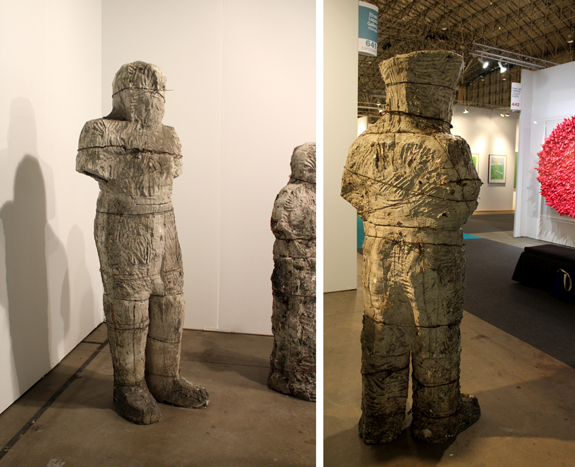 Work by Anuar Maauad. Photos by the author for Bad at Sports.

At the Natural Resources Defense Council (NRDC) booth, Sipho Mabona exhibited a stark white, 4 ft.-tall origami elephant calf made from a single sheet of paper. In spite of the lightness of his materials, Mabona manages to infuse the elephant with weight and gravity. To build an elephant from one sheet of paper is a remarkable feat of engineering, and the fragility of the paper is an apt metaphor for the devastating effects of the ivory trade on elephant populations. 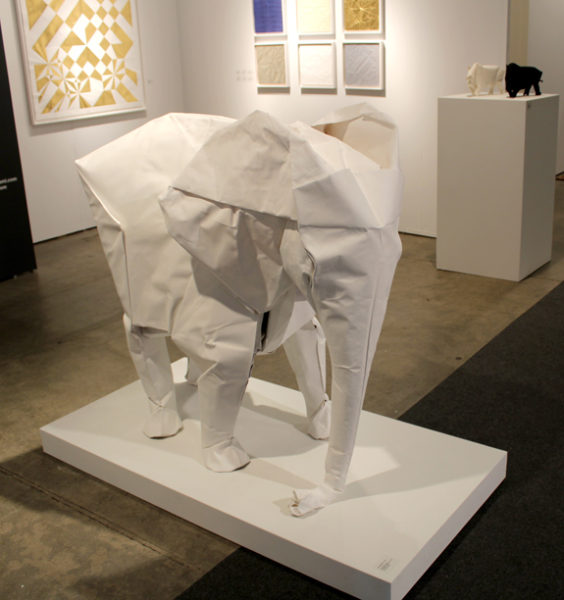 Work by Sipho Mabona. Photo by the author for Bad at Sports.

Though figurative sculpture played a starring role in this year’s Art Expo, plenty of non-figurative sculpture was featured as well, much of it infused with familiar, everyday materials. Viewers familiar with Anthony Caro’s groundbreaking painted steel sculptures from the early 1960s, which discarded with the traditional pedestal and seemed to spread out horizontally along the floor, may have been surprised to see a series of tightly arranged table pieces from his Arena series of the 1990s at Álvaro Alcázar Gallery. Whereas the steel pieces from earlier in his career were spacious and open, these works, which incorporate pieces of furniture and other carefully crafted wooden objects, are densely packed and almost claustrophobic.

Work by Anthony Caro. Photos by the author for Bad at Sports.

One of the most provocative pieces at Expo Chicago was a long, shallow sculpture by Jumana Manna at CRG Gallery. Bulging egg-shaped forms of varying sizes hug one side of a tiny wooden fence. The eggs seem to be growing, and the fence shrinking, before your eyes. The fence could be interpreted as girding and protecting the eggs, but given this year’s presidential election and accompanying proposals to build impenetrable barriers around the United States, the fence could just as easily be seen as excluding and denying entry. 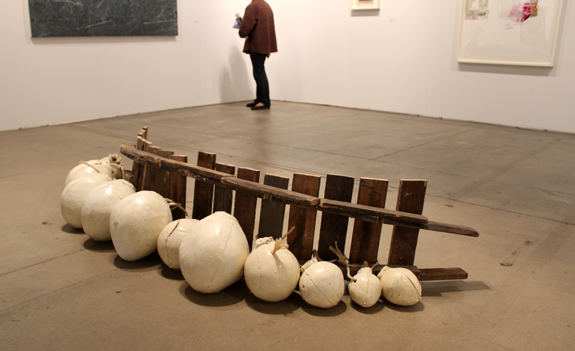 Work by Jumana Manna. Photo by the author for Bad at Sports.

Allison Wade, another artist who deftly combines materials to subvert expectations, exhibited two small sculptures at Devening Projects + Editions’ booth. In one piece, Wade suspends a small ceramic shard from a piece of thin steel bent into an upside-down “U”. A piece of bleached wood forms the base. Like much of Wade’s work, this sculpture fully exploits the potential of line to create space and visual tension. Wade recently put on a terrific show, Know Better, at Devening Projects in Chicago’s East Garfield Park. Working with the motif of the stairway, she exhibited sculptures of exquisitely composed objects that brought to mind altars, shrines or other places of contemplation. 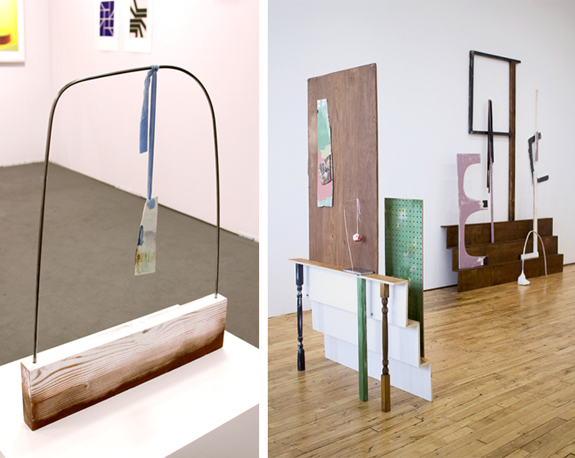 While Allison Wade’s sculptures seem to expand the space around them, Robert Burnier’s brightly painted aluminum pieces, displayed at Andrew Rafacz’s booth, seem to condense it. The work is folded inward upon itself, hiding an interior space from view. The folds have a casual quality — resembling, perhaps, a paper airplane or origami project gone awry — that belie the meticulous nature of Burnier’s process. The vivid colors, strong forms, and the play of light and shadow merge to reward sustained and careful viewing. 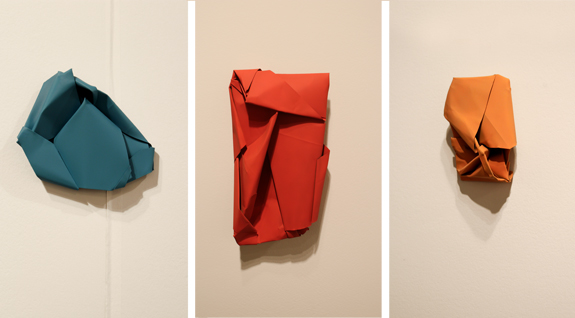 Work by Robert Burnier. Photos by the author for Bad at Sports.

In addition to sculpture, Expo Chicago featured two immersive installations that provided a much-needed respite from booth hopping. Leonard Suryajaya’s eye-popping, psychedelic installation at the Chicago Artist Coalition’s booth combined collage, video and photography to investigate the role of women in his native Indonesia. With every object, surface and wall obsessively collaged, Suryajaya’s installation is less a room and more a pure field of color and pattern with occasional interruptions of light and shade.

“Using my own confusing background as a primary source of questioning and aesthetic inspiration, I create visual experiences that provoke similarly personal responses from the viewer, while remaining rooted in the specificity of my experience and that of my subjects,” Suryajaya explains.

Work by Leonard Suryajaya. Photos by the author for Bad at Sports.

Sabina Ott’s equally immersive installation, located downstairs from the main hall, could not be more different from the densely patterned CAC booth. Whereas Suryajaya’s installation overwhelms with color and information, Ott’s piece is quiet and understated. Reminiscent of the colossal, interactive mountain she created at the Hyde Park Art Center, Ott’s installation is a series of covered passageways built of white Styrofoam. With small works of art to contemplate throughout the structure, her installation is the perfect antidote to the visual overstimulation and chaos of the art scene upstairs, a peaceful place that encourages introspection. 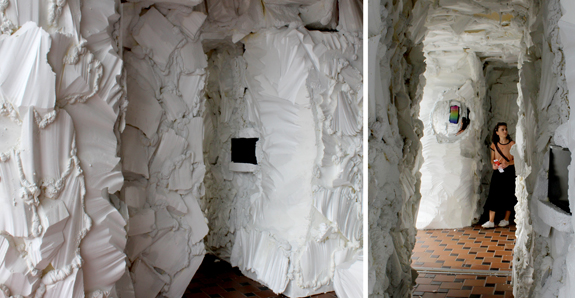 Work by Sabina Ott. Photos by the author for Bad at Sports.

The diversity and quality of sculpture at this year’s Art Expo was absolutely first rate. With all due respect to Barnett Newman, this sculpture was not an obstacle you bumped into while looking at paintings. Rather, the sculpture was something that bumped into you.