August in The Anthropocene: Month-long Interview Series by Caroline Picard 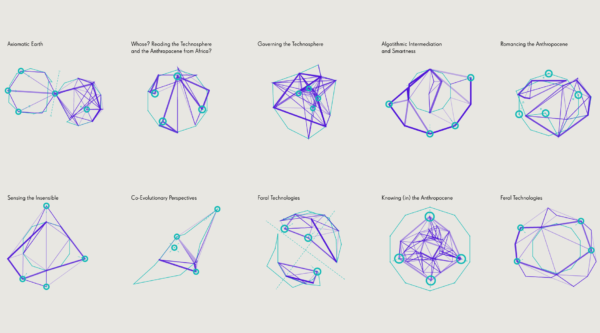 Last April I had the opportunity to go to Anthropocene Curriculum: The Technosphere Issue, a ten-day conference at the Haus der Kulturen der Welt (HKW) in Berlin; I attended as a journalist working jointly for Bad at Sports and the HKW. My intentions were twofold: 1. To conduct a series of interviews with participants. 2. To make a comic about my experience and some of the seminar conversations. The comic will take some time, but the interviews will appear on Bad at Sports this August, along with additional interviews I have since conducted after the conference ended. The topic at hand is The Anthropocene: a contested term, according to which humanity has a direct, geologic impact on planetary systems and cycles. Is it a fad? What does art have to do with it? And how might we conceive of a sense of agency?

Those questions came to mind with great urgency last spring. It’s uncanny, after all, to sit in a room with 30-100+ academics—all with impressive and various credentials ranging from evolutionary biology, philosophy, physics, law, economics, art, colonialism, activism, etc.—as they discussed our dismal prospects for the future through interactive presentations about agriculture, land grabbing practices, data mining, and oil pipelines. To paint a crude picture: we live in the Sixth Great Extinction (for a list of the preceding five mass extinction events go here), a very small group of individuals hold the majority of the human wealth, stock markets operate at a furious rate without any ethical sensibility, and—often in the name of progress—a methodology of subjugation, extraction, and consumption has dominated humanity’s interaction with itself, its environment, and all forms of life and materiality between for last century at least. It’s no secret that our reliance on fossil fuel is detrimental to long term survival, yet it seems beyond any current collective ability to extricate ourselves from relying upon the sludge of dinosaur bones to power skyscrapers, cars, or grow corn. Plastic, similarly, ends up in the Pacific Ocean, swirling around like a tiny ethereal cloud-island, filling the bellies of fish, birds, whales, et al. with tiny microscopic particles…but to stop using plastic would upturn the order of an entire global economy. Think also of the alternative energy sources: nuclear power plants that store nuclear waste indefinitely and not very well because no one can agree on where to put it. As such, it remains in short-term storage facilities of company lots—like bizarre packages of sleeping trauma, vulnerable and waiting for some rupture to burst out, actualize, and what then?

The extent to which our world is about to change is phenomenal and it’s easy to feel helpless upon the disintegrating stage of co-existence. As some have suggested, the end of the world has already happened and the present moment we share is that delay between the sound of the explosion and the consequence of its blast. But, let’s resist resigning to fantasies of the apocalypse. They are too seductive and simplistic. And perhaps the worst form of privilege is that one that abdicates responsibility in the face of suffering. How instead to walk the line between awareness and humility? To study post-heroics and remember that many worlds have ended already. During a CSTMS panel discussion with Eduardo Kohn and Colin Hayan, Donna Haraway asked,”What is it to write in a time of great extinction?…The questions that often come under the label of the Anthropocene—that is to say, the accelerated rates of extinction, the accelerated writing into the waters, into the earth itself, into the fossil record, into the gases, into the species assemblages, into the molecules, the accelerated writing of the earth in accelerated extinctions and accelerated threats of serious system collapse of all sorts—truly is the situation in which human beings and other critters must figure out how to ask each other, how or if to go on. These are not sentimental questions, though I am not against sentiment…but the question that joins us today is posed by Thom van Dooren and [Deborah Bird Rose], What is it to write in a time of extinctions and exterminations and iterative conquests,  permanent war, and genocides at all sorts of scales, that include other critters..as well as human beings?”

With that in mind, I appealed to the generosity of others: friends, strangers, artists, educators, philosophers, and scientists through a series of interviews with the hope that we might talk about these questions and, at the very least, concentrate on the uncertainty of our times as soberly as possible. Perhaps in that meditation we can, together, amplify our awareness, attending to the many acts of disappearance and the energy it takes to bear witness. Every day for the month of August, I’ll be sharing a new conversation with you, plus comics on Sunday. Stay tuned. Email me if you want to discuss and thank you for reading.

08.25: Linda Tegg talks about her approach to photography, more than human subjects, and grass installations.

08.23: Zoe Todd on fish, multiplicity, and indigenous studies in the Anthropocene.

08.22: Art Orienté objet discusses their horse plasma transfusion performance, May the Horse Live in Me (repost from 2014).

08.20: Rebecca Mir Grady talks about her artist book series about ecological events (and disasters) SHE IS RESTLESS.

08.15: Mark Payne uses his background as a classicist to propose what a “shared life” might mean today.

08.13: Samuel Hertz on the Aerocene and his work composing multidimensional soundscapes.

08.11: Chuck Cannon on tree science, tree sex, and why trees need to be kinky if they are going to survive global warming.

08.09: Ravi Agarwal on the link between activism, ecology, and artistic production.

08.08: Rohini Devasher talks about her interest in amateur astronomy, the principle of wonder, and video feedback.

08.04: João Florêncio on performance, the Anthropocene, and the complicated ethics that embracing strangers requires.

08.01: Jeremy Bolen, Emily Eliza Scott, & Andrew Yang talk about how the Anthropocene narrative has political implications (an audio version of this conversation is available here).