The following interview was originally published on Art21 on Sept 25, 2012. One of my favorite conversations with Norton and Michael Marder was conducted by Monica Westin for BOMB in March 2014. You can see that interview here. 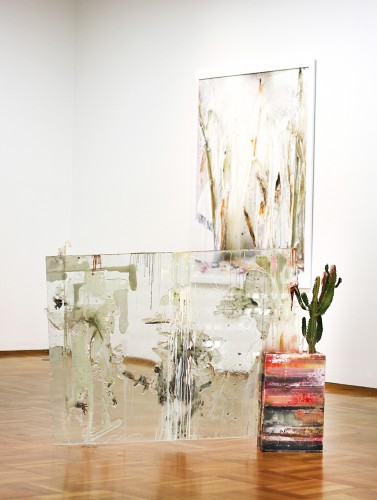 “The crude solution to the problem of vegetative life, interpreted as qualitatively weak and as verging on inanimate existence, forces this life into retreat, puts it on the run, and so increases the distance between philosophy and the plant.” –Michael Marder, Plant-Soul: The Elusive Meanings of Vegetative Life

Generally we think of plant life as a kind of fuel — a material vitality that exists to be consumed and transformed to a higher purpose: as food, medicine, paper, or housing. As such, vegetation is not often recognized as a material capable of interiority — with an autonomous desire, or a will, that could be inaccessible to humankind. Still, we know that plants seek light. We know they are active in so far as they grow and we know that, left to their own devices, they would consume a given area. Heidi Norton works with common house plants, framing them in planes of glass, resin, wax and paint. She sets up these scenarios in her studio and photographs the transformation of plants over time. In other instances she installs the 3D works as sculptures. Some plants die over the course of an exhibition. Less often, they sprout, generating new life within a sculpture. Photographs and sculptures depict the same phenomena and so play back and forth between something fixed in time — a moment of deterioration — and something in flux. In so doing, Norton creates a moment for apprehension, a moment at which the interiority of plants, framed by the artist in a visible procession towards death and rebirth, might be easier to conceive. Heidi Norton (born in Baltimore, MD in 1977) received her MFA from the School of the Art Institute of Chicago in 2002. She is currently showing work at the MCA until October 23rd.

Caroline Picard: What led you to incorporate plants into your work?

Heidi Norton: I think mostly it had to do with the primal need to have nature incorporated into my urban space — I wanted to reclaim something I had lost. Up until my mid-twenties, I spent much of my life in a rural part of West Virginia and Maryland, in the valley of Blue Ridge Mountains. My parents were homesteaders and we had a great reliance on nature, we communed in and nurtured it; in return it provided us with food, recreation, and shelter. This symbiotic relationship is integral to my work. The plants’ life is compromised and in exchange it gives something back to you in the form of art. Death can teach more about life than life itself. Destruction is a vital phase in cycles of regeneration.

CP: Why the house plant?

HN: Houseplants are our way of corralling nature, organizing it, and preserving it. They make ecology accessible and domestic. Still, houseplants, vegetation, botanical enterprise all have histories and experiences far bigger than me. As a material, their associated context is greater than my conception, but I like that. Plants, as a medium, have an ability to shift the work through various paradigms and intertexts: from fine art, to science, to personal and intimate, to vernacular.

CP: I keep thinking about the intersection between life/death/passing/preservation which you create in your work. What does it mean to frame such contrary movements?

HN: At its “roots” the work is about ecological cycles: Life, decay, death, passing and preservation — even archiving is included within that. Time is a significant factor and is recorded and observed in the works in various ways. Sometimes the same plant reoccurs in different photographs at varying phases, sometimes the plants die and their detritus is reused as a material,  and sometimes the plant sprouts new growth (that can then be pruned and reused). When the plant is “pressed” against glass or embedded in wax, it resonates with scientific notions of preservation and fossilization.

I am thinking about how a scientist kills something to know more about it or how an organism becomes a host to another organism in exchange for nourishment/life. Like something you may see at the Field Museum or in a Field Guide, I use glass as a “canvas.” Paint, resin and plants become the medium. Sometimes the plants are cast or embedded into wax and these plants often birth “new” life and growth, and other times, the plants are photographed and “recorded” in various states of life-decay-rebirth.

CP: How much does “reflectivity,” as a property present in much of your material, influence you?

HN: All the materials — the glass, resin, wax, tarps — have to do with notions of preservation. Michael was the first sculpture that I made after the New Age Still Life series. I wanted to activate the photographs using 3-D strategies. The glass surface and flatness of the “painting” side helped me negotiate that. However, the other side (gesso-ed and primed like a canvas) is very three dimensional, as if the plant is exploding off the surface. So here we see a tension with form, in addition to the life-and-death contrast that I keep referencing. The “pressing” allows the viewer to watch the plants (and themselves — their own reflections) change from green to yellow; while the plants desaturate as time passes, the white side always stays pristine, waiting for something to “happen.”

Read the rest of this interview here.