In and Out of Virtual Space: An Interview with Robert Burnier

This interview was originally published on February 2014. 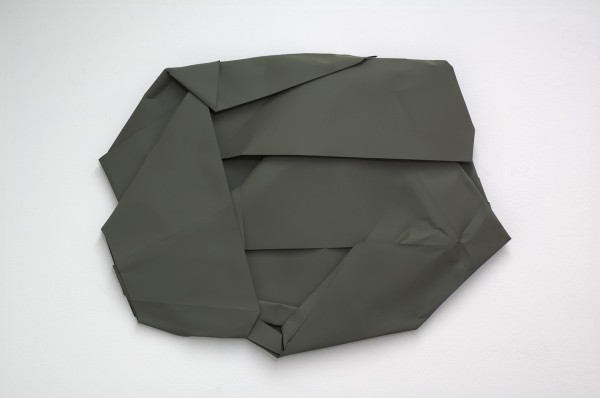 This interview has been long in the making. It started months ago, after I visited Robert Burnier’s solo show at Design Cloud in the West Loop. It began because I’d seen Burnier’s work over the preceding summer at Andrew Rafacz Gallery, and again at Chicago Art EXPO; it began because I kept wondering about his crumpled aluminum wall sculptures—what to me have always seemed like the wreckage of a minimalist object, still pristine, still auratic, and yet all the more difficult to resolve, somehow. The following interview, conducted largely by email, parallels other conversations we had begun about what is and is not considered “natural,” and how our understanding of digital space is influencing our sense of the material landscape. Not surprisingly, Burnier provided much insight and I’m happy to share at least some of that here.

Caroline Picard: How do you think about landscape? Does that question emerge when you’re composing your abstract aluminum works?

Robert Burnier: I definitely have to be conscious of landscape in the sense that anything for the wall can be seen in that way. Beyond this, though, I’ve often made work that hovers or vibrates between the categories of landscape and figure, or landscape and terrain. By “landscape and terrain” I mean a difference between pictorial space and experiential space. For the sculptures, specifically, the idea of terrain is very important. As opposed to a more direct kind of construction and mark making, I think about operating within something that comes with its own history and peculiar spatial configuration. As I move through these spaces, I look for something interesting to emerge. They also essentially operate on me as they proscribe certain actions through their boundaries and character, and by how every move simultaneously closes some pathways as it opens others. And yet they don’t completely dictate what I will actually do with them as a whole.

CP: You’ve mentioned the situationist dérive in conjunction with your aluminum pieces—as though to suggest that the ways in which you improvise, negotiate, fold and crumple the material is a kind psychogeographical exploration of that same material. Would you agree with that?

RB: Yes, I would agree with that to a large extent. In retrospect, I think I’ve been interested in something like that for a long time, actually. I’ve always had a penchant for wandering urban spaces in a way reminiscent of what Guy Debord describes in his essay on the theory of dérive. So it’s made its way into my practice more or less consciously. While dérive was a response to physical urban spaces, we also experience our contemporary urban geography through virtual structures, with populations acting in concert with communications networks and sets of common interfaces and devices, etc. In my work, I’ve put virtual and physical spaces on par in certain ways. They are both material for use. I might use off the shelf CAD systems, readily available physical materials and commercial paints. What I do with them resembles a dérive in the sense that I “walk” through prefigured fields of shapes or terrains as described above, while translating between virtual and physical mediums. Certain complexities play out on their differences. For example, a form in a CAD system may be contradictory or at least untenable in the physical incarnation. So I’m discovering certain things as I “test” them [those digital systems] in, say, sheet metal. I start out by following the lines, by scoring and cutting by the potentially “problematic” drawing, but then I take detours and make other choices that go against the line, and ultimately still produces something that contains and expresses that original trajectory. In a very general way, I like to think that whenever I use a CAD system, a can of spray paint, or a gel pen, I’m definitely handing a lot of what happens over to the nature of that system or material. It’s not exactly collaboration, but it’s a kind of acceptance of mass technological culture in the work. At the same time I try to make these things go beyond themselves rather than have them pass unfiltered.

CP: Is your background in computer science present to you when you are working artistically?

RB: More than anything right now, certain states of mind that come from working with computer technology and software have a bearing on what I do. I am focused on process and algorithms as ways of approaching art where the steps I lay out matter to me as much as whatever actually happens. I should add: “as much as,” but “not more than.” Often what I’m trying to do is come at these things from a decidedly different vantage—by taking something precisely or mathematically defined and putting it through the vagaries of some physical challenge, or employing techniques that are at cross purposes with straightforward execution, or by making two things interfere with each other somehow. But it’s also critical that I be me in the studio doing something. It’s not just about a fascination with wreckage or a glitch, or winding up elaborate systems that play themselves out. 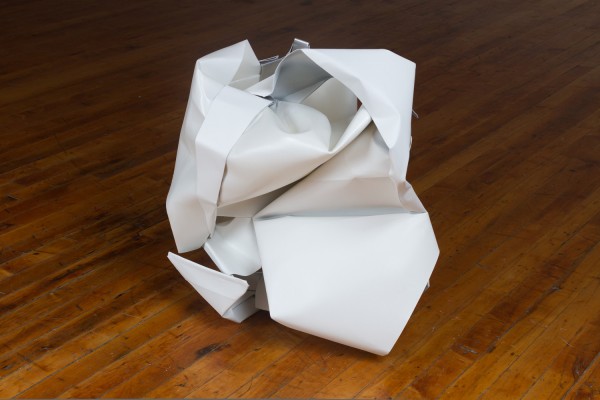 CP: How has minimalist sculpture influenced you?

RB: The direct and experiential aspect of minimalism always attracted me. One thing I take from it is the idea of art as a demonstration; a thing put forward as a concrete suggestion. But I never think about this concrete presence as some completely stable, impenetrable unity. I like to see what is real, in front of us being what it is and also something else. It can be a material that is made to appear like a different material, for instance—something that creates an impression that goes beyond itself. I get excited when a sculpture appears simple or decisive in some way, while being difficult to add up. Minimalism often worked to achieve a kind of wholeness that I sympathize with, and at the same time I try to complicate that.

CP: Do you worry about scale at all?

RB: There are current tendencies toward the non-monumental I can identify with, though I don’t feel especially constrained by them. Right now I am making generally smaller work that enters painting dialogue and exists in a somewhat more intimate individual space. I like to think someone can enter into a piece and follow me when they are presented with what happened as much or more than they would if they were confronted by something especially sizable. What a minimalist approach does for me is increase my focus on small moves and their potential significance. Of the few elements I do bring together in the work, however, I like them to play against each other subtly rather than simply aiming toward the same whole.

CP: Do have expectations for what a work of art should do? Where do those come from?

RB: Minimalism turned over a lot of fundamental things about what constitutes a work of art. Is it supposed to absorb or repel a viewer? Be autonomous or relative to its environment? Instantaneous or durational? However I answer those kinds of questions now, thinking about Minimalism has made an indelible mark on the way I approach my work even if only in the kinds of questions I ask of it.

CP: You work in other mediums as well, which require their own strategiesâ€¦

RB: I like the term “strategy,” which implies a consideration of means to an end. I like to try different things out. Hans Haacke’s “project based” approach comes to mind. But I also have a thing for the ineffable surprises to be found in the arrangements of an artist like Richard Tuttle and how he can burrow in on an investigation through as series of objects. When it comes down to it, though, I actually think in a very physical and experiential way about what I do and source things from experimentation and a process of discovery. I remember Terry Myers telling me of his impression that I was “tinkering” around in the best possible sense. That sticks with me. 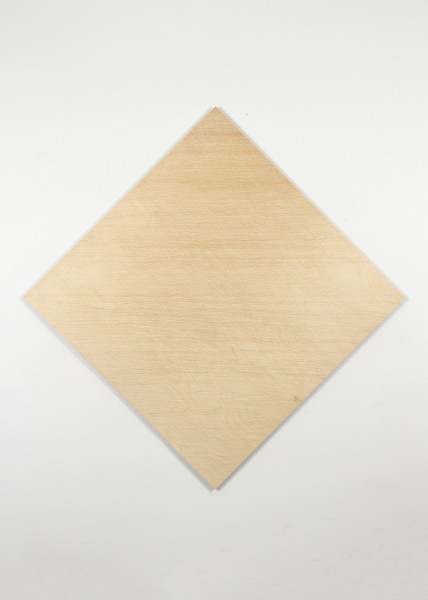 CP: You have a series of line drawings on plywood where you reproduce wood grain. Where did that body of work came from?

RB: So with the drawings on plywood panel, I wanted to see what would happen if I took a few elements, thoughts and actions and wove them together. Plywood is interesting as a kind of hybrid, something natural that has been made artificially stable through geometry and chemistry, like a prepared and preserved food. And yet it has this natural wood grain. I thought the most direct approach would be to have a square of the material, and to work within the boundaries of that space by drawing something equally basic—a series of lines from edge to edge. The lines get very complex when you draw enough of them next to each other freehand. I could have predicted the moire pattern, and I chose a color that was a really good not-quite-match for the Baltic Birch, hoping it would “sink” into the wood visually. But it turned out even better than I imagined, judging by the way you read the lines as virtual wood grain.

CP: Do you feel, regardless of medium, that your work addresses related themes? Is that important to you?

RB: Yes. A culturally situated identity or a logically constrained action are important touchstones, for example. Mediated marks, subsumed images and ruptured natures are important, such as in the plywood drawings or a fully representational, painted sky scape I separated onto multiple panels and turned sideways to transform into a minimal color grade. I always try to confuse and mix these things. In all of it I hope a little bit of expression will sneak out from under a pile of process, enter through the back door of an algorithm, or emerge from a bunch of repetitive doing. On the subject of constrained identity, I’ve been thinking about and talking with a number of Chicago artists who may share some of my mixed cultural and racial background. The more time I spend on that the more I think there’s something I have to find in that. Along those lines, choices like the use of Baltic Birch and African Mahogany plywood for my drawings resonate, given my 50/50 Northern European and African genetics. African Mahogany, I’ve discovered, also has something called chatoyancy which causes its color toÂ  change appearance depending on the angle of view.

You can read a longer essay I wrote about Robert Burnier’s work here.