Plant Humans of the Future: An Interview with Saya Woolfalk 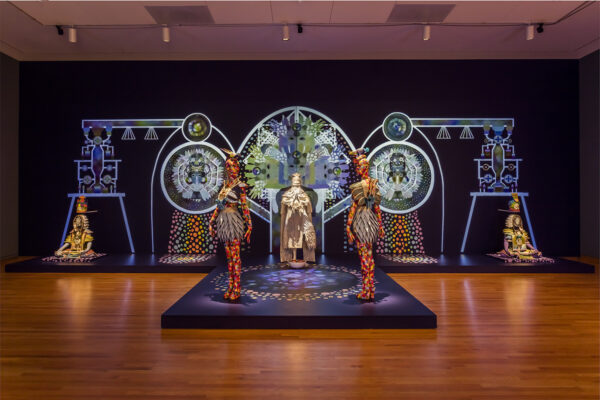 Saya Woolfalk Installation at the Seattle Art Museum in the Disguise Exhibit, 2015 – Photo by Nathaniel Willson

Saya Woolfalk is a New York-based artist who, for the last decade, has been building an elaborate and multi-dimensional narrative about alternate cultures. Woolfalk’s physical installations document the artifacts of these cultures—specifically the No Placeans (plant humans) and the future human culture that discovered No Placean bones, the Empathics—using ethnography-museum displays strategies that she populates with digital projections, elaborate costumes and mannequins, paintings, artifacts, and totems. With that intersection at play, Woolfalk offers alternative models for cultural exchange, societal hierarchy, and the way they mirrors many own conventional norms today.

Caroline Picard: What is No Place?

Saya Woolfalk: No Place is a project I worked on from 2006-2008 with filmmaker and anthropologist Rachel Lears. It was scripted and conceived by collecting the utopian desires of people in our communities. Through a series of ethnographic interviews, the story of No Place emerged. The No Placeans are plant humans who change gender and color, transform into the landscape when they die, and repurpose refuse into usable technologies.

CP: Did that vision of utopia continue to evolve in your work after 2008?

SW: Once this collectively imagined “utopia” was established I began to think about how people in the present could become the plant humans of the future. In 2009, I worked with a group of women dancers to create the first Ritual of the Empathics. Then in 2010, I collaborated with biologists at Tufts University to hash out how humans might actually become part plant in a project called The Institute of Empathy.

In 2012, The Institute of Empathy (IoE) curated and lent an exhibition of objects, dioramas, and videos at the Montclair Art Museum in Montclair, NJ. In this exhibition The Empathics describe how they find a group of No Placean bones into the woods of upstate New York. A fungus on the bones stimulates a physiological mutation that allows Empathics to easily cross species by integrating various genetic materials into their DNA. The nonprofit organization IoE was established to study this new morphology and distill the mutation process into a multi stage system so that any ordinary human can opt into becoming an Empathic.

CP: It seems like you’re talking about cultural exchange, where the fungus becomes a radical agent between Empathics, No Placeans, and the fungus itself. What was it about fungus that makes it a good multi-species ambassador?

SW: When I interviewed the biologists at Tufts, I gave them the backstory for the plant humans of No Place. I then asked what might make people from the present hybridize in such a radical way. One of the researchers offered the example of a fungus that implants itself inside of an ant. The ant is generally risk averse, but the introduction of the fungus alters both its behavior and morphology. Sprouting out of its host body, the fungus eventually kills the ant. When I saw an image of this violent rupture and subsequent transformation, it seemed to be the perfect inspiration for the origination story of the Empathics.

CP: I’m interested in how you borrow scientific, ethnographic, and artistic strategies to build not just new cultural narratives, but also objects and installations. Can you say more about how you incorporate and refract biological, anthropological, and artistic methodologies?

SW: In the visual art program at Brown, we were offered a variety of classes where we could explore combining the methods of art and science. After grad school, I moved to Maranhao, Brazil with my husband, cultural anthropologist Sean Mitchell. We lived in his field site for two years and this is when I began to borrow anthropological methods for thinking about and making my own work. I also got a Fulbright to do research into folkloric performance traditions in northeastern Brazil, which is how I met Rachel.  When we got back to the States, she and I decided to collaborate to create the short film I mentioned, Ethnography of No Place.  That was the first project I made that really blended artistic and anthropological methods into a single project.

CP: One of the things that struck me about the Empathics is that they are described as being plant/human hybrids; they are very adaptive and easily absorb different influences. I loved this idea because in some way I feel like you are articulating a bridge between nature and culture, which is typically difficult for Western philosophic and cultural frameworks to embrace. What was it about plants that made you interested in plant/human hybridity?

SW: I spent summers of my childhood going to elementary school in rural Japan were there was an emphasis on learning about plant systems in. We nurtured plants, learned about their ecosystems, and relationships with humans.

In 1999, when I was a junior in college, I went to my first Venice biennial. At the biennial I encountered the Kaki Tree project, in which a singe persimmon tree survived the bombing of Nagasaki in 1945. This mother tree emerged out of a catastrophic historic event and its human collaborators stimulated intercultural exchanges using her saplings. On their website they describe how “Art cultivates the imagination to help us feel others’ pain and creativity to build a new world. It goes beyond borders, religion, race and even language, and helps us feel sympathy for each other.” The structure and drives of this project impacted how I wanted to conceive my future work.

CP: What continues to draw you to the Empathics? Do you think of their narrative as a kind of medium?

SW: I always wanted to create a project that would allow me to think about cross cultural relationships and hybridization but did not want to use my personal story or standard tropes of multiculturalism.

SW: ChimaTEK is the corporate branch of the IoE; through this corporation, the Empathics have patented a multi-step process with home-use technologies that make interspecies and intersubjective hybridization available to all.

SW: The corporation is intentionally ambiguous and distopic. When I first conceptualized the project in 2006, ChimaTEK was in my notes as The Land of the Pleasure Machines. In this early iteration of the project, the Pleasure Machines are humans who give up their flesh and take on robotic bodies. As No Place and the Empathics developed their own logics, I revised the story to explore what happens when research that seems to be utopian gets coopted into a corporate logic. ChimaTEK allows users to wipe their identities clean and download specially configured identity algorithms. What do we self-select if we are capable of this kind of transformation?

CP: That makes me think about the power of fictional narratives, somehow, as a method to imagine alternative realities and  mirror one’s own reality, without implicating a specific, individual biography. Still, I think it’s interesting that empathy plays such a big role in your work. Why is empathy so important?

SW: In graduate school I was inspired by Afrofuturist feminist Octavia Butler’s Xenogenesis series. In these books a race called the Oankali go through the universe seeking organisms to trade genetic information with. Empathy plays a complex role in this story, from the perspective of the Oankali they are being empathic, they are saving humanity from the brink of destruction. However, humans lose their autonomy once integrated into the Oankali genetic order. The protagonist, Lilith, establishes a blended family out of her relationship with the Oankali and the books trace her personal and social conflicts with being a trader to her humanity as well as a desire to integrate into a new genetic and social order. The series has been described as an exploration of the trans-Atlantic slave trade; Butler uses science fiction to consider forced familial relationships forged out of slavery that resulted in generations of African Americans having conflictual relationships with their integration into American culture.

CP: It seems significant that you haven’t written a novel (as yet) but instead make objects, installations, and performances, almost as secondary artifacts that viewers apprehend like archeologists…we don’t access the direct text-narrative, but instead connect the dots via artifacts that narrative produced.

SW: Octavia Butler’s fantastical and psychologically complicated myth fueled my desire to tell a story. As a visual artist, I knew it would not only be told through words but through a physicalization of objects, places, and by building new realities. So, for me, the objects and installations are very important, they are the material manifestation and physicalization of another place. They are the things that make the place real, that allow us to have access to that place. 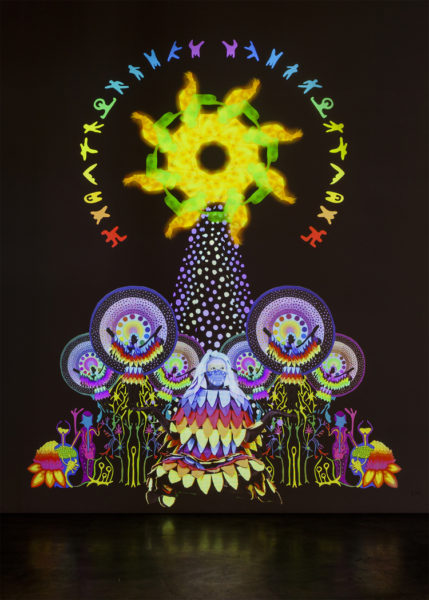 CP: You are able to hit a lot of registers at once and seem comfortable with the seams between digital/material/nonhuman/human mediums; that’s part of what makes your work take on such a cohesive feeling of artifact. How did you develop that process?

SW: I started playing with digital technology early on in my work. I made digital collages with costumed figures using early versions of Photoshop in the 90s. I was trying to use the newly available digital technologies to combine real people and places with new imagined possibilities.

CP: What about the difference between mannequins and live bodies? Does that difference matter?

SW: I gravitate towards the utopian potentials of digital space (post race, post gender, post human etc.), but understand that people live in real bodies that experience real consequences based on how they are gendered, sexed, raced and classed. As I currently explore things like augmented and virtual reality, I constantly bring us back to actual bodies in space, real dancers that have physical manifestations not just phantoms that exist in digital space.

CP: What would the Empathics say about the Anthropocene?

SW: The Empathics are initially ordinary humans and do their work in human centric systems. I imagine they would not be opposed to the current geological epoch being characterized as the Anthropocene. However, I don’t think they would want ChimaTEK or the work of the IoE to be limited by a human centric vision of possibility. I teach at Parsons the New School and a number of mu students last semester worked on projects that centralized birds or rocks as the consumers of the work. I think that the Empathics would be interested in this kind of exploration.