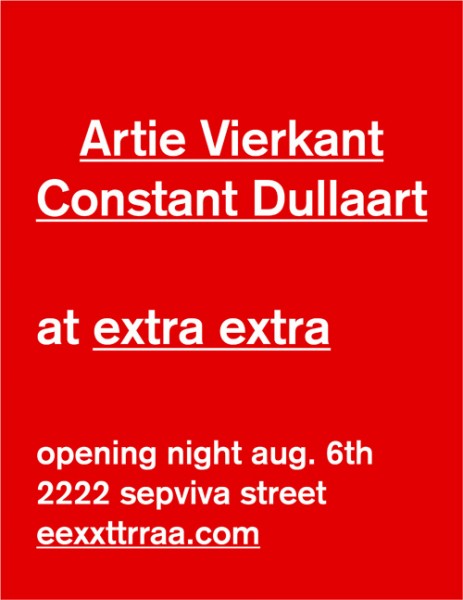 In RE:adymade, going on display at Extra Extra in Philadelphia on August 6th, Constant Dullaart and Artie Vierkant have compiled and created a suite of works that address the dichotomy of material and ephemeral existence that occurs within digital and networked society.

Although the two makers have never met in person, the similarity of their work speaks volumes about contemporary concerns of working online. For this exhibition, Dullaart and Vierkant have decided to embrace what some would consider a more â€œtraditionalâ€ aesthetic, opting not to use many multi-media objects or display methods for this joint undertaking. As a result, one begs to question whether or not both artists have become disillusioned â€“ or otherwise embittered â€“ by their digital personas and the work it engenders. Each artists seems to approach this decision differently, but both arrive at rooting their work within a greater dialog of art history.

Vierkant, for example, has pulled from his Dutch heritage as a resource for inspiration. Taking a page from Mondrian â€“ who famously delved into abstraction partially as a rebellion against classical Dutch figurative painting â€“ Vierkant (which conveniently translates in English to ‘square’) has created several works in this show that seek a meditative state within abstraction. In a piece called, Why netart should be taken seriously, Vierkant creates a convincing family tree that traces his lineage back to Hans Bollongier. This wall piece is arranged in such a way that one is hard pressed to deny how this work contains an uncanny resemblance to Bollongier’s floral paintings. As you walk around the corner, Vierkant’s introspectiveness becomes most notable in a new piece entitled White Light, where the artist has projected white light through a broken prism in order to create a fractured full spectrum of color that illuminates the gallery floor, which then has been painted to add saturation. Also on view is (what I consider) a continuation of Vierkant’s ongoing Crops project. This new series, entitled Zwart-wit, has taken monochrome sections of masterpieces by 17th century Dutch painters and isolated them into a series of prints. One can also view subtle tinges of his Dutch ancestry by looking at Vierkant’s recreation of Paul Verhoeven’s Hollow Man (the piece shares the same title) where he methodically, frame by frame, replaces Kevin Bacon’s character with Photoshop’s Content-Aware Fill.

Dullaart has continued in his tradition of making work that is both playful and sublime. In this show he has also rekindled old histories to inspire new works. In his new piece re.adymades.net, he has created an algorithm with the help of a computer programmer to create a database of automated websites made for fictional artists or artists working under pseudonyms. These sites not only operate as placement keepers, or â€œsquatters,â€ for these artists, but they also attempt to network these artists and writers together into a type of conceptual hive-mind. Dullaart has also created a new web piece called askask.net which takes the Ask Jeeves engine and recursively continues to submit the results of questions back into the search engine. The site logs all of the question/answers in a document that is then printed out periodically throughout the time of exhibition. The resulting document serves as a type of alternative archive to traditional browsing, particularly since ask.com has often been considered a small player amidst the search engine elite. The gallery is littered with small taped off boxes that all belong to a site-specific installation called Sight Lines that Dullaart has made for the exhibition. The boxes represent ideal locations to mount projectors for screening material on the gallery walls and/or floors and can be observed as a continuation of his previous installation Multi-Channel Video Installation at Gallery West in the Netherlands. During the opening, Dullaart will also be performing a new â€œconceptual recreation disco dance,â€ called Flurry (which presumably has something to do with the default Apple OSX screen saver).*

Dullaart and Vierkant’s work manifests in this show as a type of liminal state between virtual reenactments of art history and fictional personifications of contemporary cultural icons. Going to this show, and knowing of each artist’s work online, one arrives on the cusp of escaping the screen, but eventually feels the desire to return back to â€“ or a failed will to abstain from â€“ it’s warm glow.

Both artists will be on-site for the duration of the exhibit to give guided tours and almost daily artists talks with Q+A sessions.

*Video documentation of this performance will be posted to the extra-extra blog once it has been compiled.