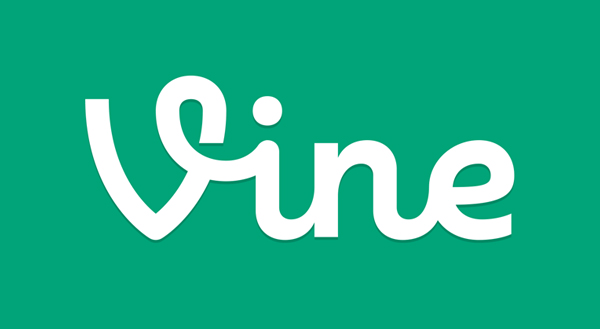 In the past couple weeks a myriad of media outlets have been chomping at the bit to comment on the first sale of a piece of art made on the rapidly rising social media platform Vine.Â  The work in question was made by Angela Washko and presented at the Moving Image Fair by Kyle Chayka and Marina Galperina in their Shortest Video Art Ever Sold (SVAES for short) booth produced in collaboration with Postmasters Gallery. The sale of the work has been quickly marked as an easy target for many critical articles for a variety of reasons, however I feel that most takes have missed some of the more salient issues that surround this sale. I sought out Chayka, Galperina, and Washko to discuss not only their intentions with the project but also to examine what exactly this sale might signal in terms of a potential future for new media art production and saleability.

Before continuing, I feel itâ€™s important for me to say that I have serious misgivings about what the gesture of this sale means for contemporary digital art. That being said, I feel like the media coverage of this event hasnâ€™t given the participants a proper due, or has often been delivered from a somewhat askew and reactionary perspective (which I also might be guilty of). Although what follows is not an attempt to â€œget the story straight,â€ Iâ€™ll try to curb my personal trepidations in favor of unpacking the intentions of this project. Discussing the implications of this sale â€“ albeit from my hesitant vantage point â€“ come from an underlying respect for the curators to find ways of challenging media art and itâ€™s location within a contemporary market.

On first glance, SVAES presents itself as a very self-assured project in that it immediately places these works in the context of purchasing and ownership. As a markedly youthful project, SVAES revolves around showing Vine as a kind of media art shopping-network/sketchpad. The rapid adoption of this product by artists working online (from Ryder Ripps to Rollin Leonard) seemed of particular interest and importance for the curators. In our conversation over email, Chayka maintains that his and Galperinaâ€™s intention was always aimed at being tongue-in-cheek. Through employing this trending technology, Chayka articulates how initially the idea of asking artists to use Vine was a way of creating a semi-satirical entry point for this type of work within a larger art market:

I don’t think SVAES was trying to present any particular kind of aesthetic or enforce a style; it was just about giving artists an opportunity to try something different, more improvisatory. For many of the artists, video isn’t even their primary medium. This is more like a quick, expressive sketch, a video doodle, which seems like what Vine is made for.

Much of the press around SVAES positions the booth not only as aÂ â€“ in my mind seemingly unnecessaryÂ â€“ bridge between video art and netart (as Chayka articulates) but also as a way for fairs to start to include artists primarily working through the web. This kind of representation of a netart community points to the abnormality of netart to be shown within the art fair circuit (artists participating either lack typical gallery representation or have decided to work outside of/parallel to traditional art markets). A result of this representation â€“ combined with the curatorial decisions of Chayka and Galperina â€“ is that the booth acted not only as a segue for netartist to be considered within a video art context, but also served as one of the first representational outposts of this generation of artists within a bigger art market. There have been other efforts and offshoots, including LikeArtBasel, but the specific intentions combined with internal support from the Moving Image fair mark it in specifically unique ways. As a result, the SVAES project coyly suggests to the traditional art world a need for opening up traditional methods of distribution for the sake of staving off cultural obsolescence. 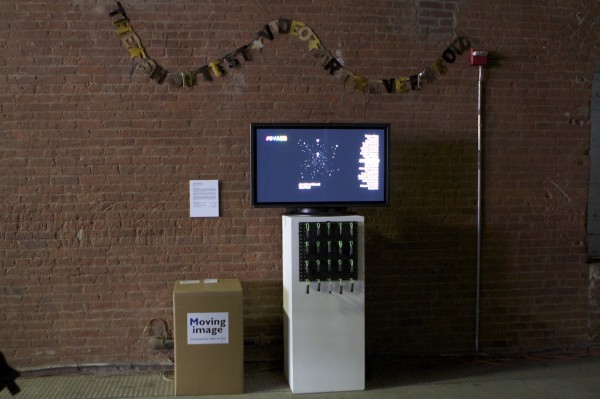 This attempt at expanding horizons was a particularly important gesture for Chayka, especially when considering how digital art inherently disrupts the standard channels of art collection and distribution. An important aspect of this disruption comes from the way that the curators dealt with asking artists to use this social media platform. Artists participating in SVAES withheld their videos from public consumption, only to be viewable at the Moving Image booth. If a work was purchased, however, the responsibility of distribution and hosting was put to the collector.:

The social media tie meant that until the piece was bought, you couldn’t see it online â€” the artist couldn’t publish it, no one could share it, it functionally only existed in the gallery space, it had scarcity. But then when it was bought it was put online instead of taken off, with the imprimatur of the collector. Collecting is at times a very public act, and people should be proud of the art they buy and the artists they support. Through the Vine format and the SVAES project, we mad a meaningful way for them to do that.

The proposed, and eventual, collector had the choice of reposting the video back to Vine or to keep the work within private circulation. The sale of a work implicates the collector in deciding whether or not to allow the work to return to its native networked environment. This curatorial decision is where â€“ in my opinion – the art in SVAES lives.

The unfortunate result of this artistic gesture is that it inadvertently undermines the work of the individual artist. In other words, Washkoâ€™s work â€“ and other SVAES pieces â€“ becomes a foil for a curatorial critique of the art market. Washkoâ€™s Vine is rendered somewhat irrelevant as soon as it is sold since the work no longer becomes about the artists and their piece, but more about the curators and the collector; at least this shift is where we find ourselves after the purchase has been complete. This process is not exclusive to SVAES as a model/format, but I wonder if the execution of this project is just highlighting an already standardized procedure within contemporary art sales in the form of an intentional gesture. If this is the case, maybe Iâ€™m not giving enough credit to SVAES. Even if this were so, the agendas involved in SVAES speak more directly to collection, distribution, or the way the net is expanding these horizons, and not to the content of each piece. 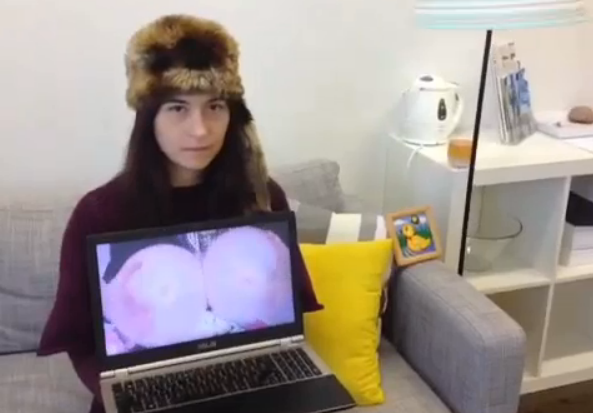 The thing that is important to [the Moving Image Fair] is that this so-called groundbreaking “Vine-art sale” happened within a framework they own.Â  So it feels especially shitty when I’m not getting any love from them and also taking all of the heat for this project in several extremely spiteful articles, which I must admit are fun to deconstruct and respond directly to. I am thankful for having a very supportive community who are talking to me a lot about this experience as I try to process it, because it’s been really weirdâ€¦ this unexpected media response to this piece was really hard for me in a way, because this was a work I wasn’t ready to talk about yet.

Washko continued to explain how the sale of her vine went to a collector who has previously supported her work (Myriam Vanneschi), and that the $200 sale was a particularly personal gesture of a sustained artist-collector relationship. More importantly, the pointed backlash against Washko as an artists (as opposed to Vine as a product, or the Moving Image Fair as a cultural institution), strikes a disturbing chord since SVAES as a projects wants to critique institutions and not makers. Perhaps the vehement misrepresentation of the work and of SVAES speaks to the problems of presenting and selling work that embraces the sketching quality of Vine that Chayka discusses above. In my mind, relying on social networking as the primary platform of creative production is in itself a pressing problem within online art communities, and should be viewed as one of the primary sources of skepticism put toward this medium. Washko, however, discusses how this reliance is now part and parcel for how artwork is being made online:

We are already reliant on facebook/twitter/whatever to distribute work because the gallery system doesn’t support this kind of work and we realize that we have access to like-minded artists across the globe, and we can support each other by helping to find contexts where this work will be supported for each other.Â  I think it is surely problematic to reinforce the value of these branded, evil(!) channels, however it is hard to deny the benefits they have to broadening audiences and finding better contexts for work.Â

Perhaps the underlying problem here is that artists working online (at least in America) have decided to choose either gallery representation or social media; both formats necessitating a sidelining of personal politics in favor of reaching a larger and more lucrative audience. For those that choose social media in favor of traditional gallery representation, the artist is left in a particularly vulnerable position since their personal web presences acts as a stand-in for institutional safeguarding (i.e., a museum or curator can take the brunt of criticism and not the individual artist). The sacrifice is becoming more and more daunting as issues of digital ownership and intellectual property online are quickly mounting an End User License Agreement event horizon. The problematic that Washnko describes is perhaps the central location of where my reservation against SVAES lies. When an artist makes work specifically for the context of any given social platform â€“ whether by choice or by invitation â€“ the work unintentionally becomes a supporter of that brand. Perhaps the most troubling thing is the willingness on the part of the artist or curator to submit themselves to the whim of a more dominant cultural identity like Facebook.

This is particularly the case when a work made with social media does not address the material specifics of that platform. At the opening comments at the Tumblr Art Symposium held at 319 Scholes, Christiane Paul addressed how few artists working in social media actually use the infrastructure or material of that media as a resource of creativity (a telling differentiation between the current generation of netartists and their predecessors). Paul quipped (and I’m paraphrasing here), â€œAre we really talking about Tumblr Art, or merely talking about art on Tumblr?â€ To that end, if artists online are willing to be making work using social media platforms, then how is that work reflecting on the platform on which they are distributing? More importantly are we even at the point now where questions like this are still relevant? Although SVAES is moving toward this critical position by questioning distribution, access, and ownership, in doing so it renders the content of each individual work as negligible and ultimately subservient to being just another vine in a digital bramble.