Thursday of this week will mark an important moment in the history of digital art. Although the long and fruitful history of this medium will hardly be brought to a close, an important chapter in its narrative is about to unfold through the first ever digital art auction hosted by Phillips. The auction, entitled Paddles On!, Â is of particular significance because it is not only the first auction for Phillips, but also the first primary market auction to occur at any major international auction house to only feature digital art works.

When I had first heard the news that Phillips was teaming up with Tumblr to host an auction a couple of months ago, I was a bit skeptical. After hearing that Lindsay Howard (co-director of 319 Scholes and former Eyebeam Fellow) was coming on board to advise and curate the works for this sale, some of my reservations started to dissipate. But I didnâ€™t fully come around to appreciating this auction until I got a sneak peak of the exhibition and had a chance to sit down the three organizers of this project: Ms. Howard, Megan Newcome (Phillips Director of Digital Strategy), and Annie Werner (Arts Evangelist at Tumblr). 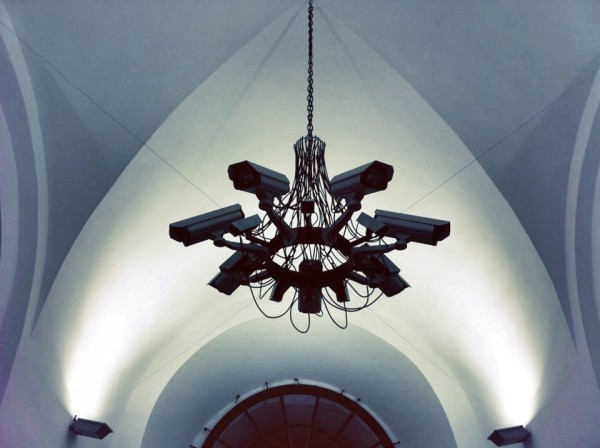 During my visit last Friday, I got a chance to see the final moments of installation, and was also given a guided tour of the broad yet considerate exhibition of the works on sale. The diversity of the work was not only presented in a near flawless manner, but it also showcased the breadth of pieces that all can directly and loosely be identified as digital art. I found myself â€œchecking boxesâ€ as Ms. Howard led me around the exhibition, noting familiar faces like RafaÃ«l Rozendaal, Kate Steciw, and Alexandra Gorczynski. But as my tour continued, I was confounded when my curatorial and critical presumptions quickly dissolved upon noticing that the collection of makers presented in this auction was not pandering to a specific audience or community. Of course I wasn’t expecting anything less of the organizers, but there was a part of me ready to criticize the exhibition for neglecting to include digital artists that otherwise wouldn’t associate with one another. Instead, I found this group of artists to appropriately reflect the many facets of digital art â€“ an assortment that all too often is presented in separate digital fiefdoms. Later, Ms. Howard commented that her intentions with this auction were to bring in as many voices within this sphere as possible:

When Iâ€™m curating in general â€“ not just in this particular auction â€“ Iâ€™m looking [at] who the nodes are in the network that are actually creating fresh work or creating fresh ideas. So I looked for artist for this auction who were nodes and are representative of larger movements in the field.

To that effect the artists represented doÂ constitute many different subsections within the digital art moniker â€“ interactive sculpture, generative code-based works, netart, webcam performance, experimental video, etc. But what surprised me the most was the way in which these different â€œnodesâ€ seamlessly come together in the space. This is not to say that the artworks appear â€œsameyâ€ by any measure, but instead it is to comment on how these works share a common thread of turning contemporary technological experience into a refined aesthetic statement.

Perhaps part of this comes from the fact that I havenâ€™t seen many of the artists in this auction shown in spaces equal to the Phillips standard – often I’ve only experiencedÂ this work either on my personal computer or in artist run galleries operating on a shoestring budget. In a strange way, the pristine presentation of these works alone makes them appear worthy of sale. It was at once startling and refreshing to see work that I had admired for so long presented in the same way as a work for sale by an old master. 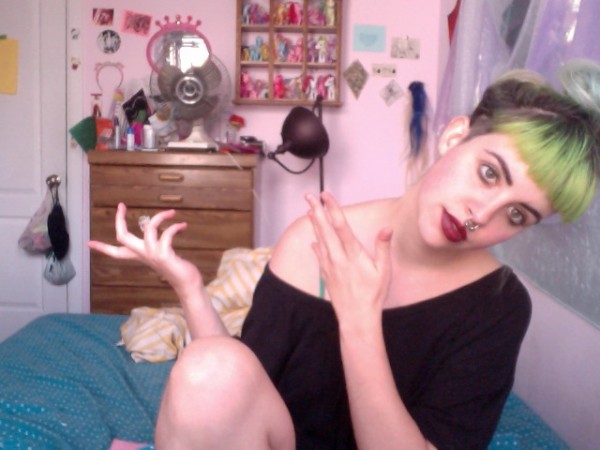 This being said, my admiration for the participants in this exhibition made me reflect on the content of these works in a way that I would otherwise take for granted in other contexts. I subsequently contended with the organizers that the look of these works shouldnâ€™t be their only selling point, and I pressed them to talk to me more about why this collection of artists seemed fitting for this auction. Ms. Werner responded by talking about how Molly Soda was a particularly fitting example to rebuke my inquiry:

While Molly [Soda] is obviously very important to tumblr â€“ I think sheâ€™s one of the first tumblr famous it girls â€“ I think that she as an artist didnâ€™t really come into [her own] until someone was like â€œyouâ€™re an artist.â€ But I think for a longest time she was really a user that really informed the way that our platform grew and developed. [The auction] kind of elevates that entire culture that I think others felt was a little small or diluted. People didnâ€™t take it seriously but itâ€™s so huge and so vibrant. Mollyâ€™s piece really gives a voice to this generation.

Although this specific work â€“ a reading of letters and comments posted to her blog in a marathon 8 hour recorded performance â€“ is indicative of a very contemporary conversation occurring through social media, the question kept arising regarding why this moment in particular seemed ripe for having an auction for this kind of work. Part of my initial skepticism came from observing the many previous attempts to sell digital art either going awry or else backfiring. In the past, the idea of taking online media and putting it into private collection has seemed rather antithetical to the ethos of the very platform that made their work possible (or else made the distribution of their work that much more accessible). But more recently, the thought of selling digital art has become more popular as the market seems better equipped to present these artists to collectors. I asked the organizers to talk about why this moment seemed most fitting, to which Ms. Newcome responded:

When I had first started talking to Lindsay, she asked me what was the Phillips angle in the auction world, and it is what is now? This is what Phillips sells, and I think that was inspiring for Lindsay. Once that was established that thatâ€™s where we wanted to go â€“ the vibe of the whole event â€“ that became a point of no returnâ€¦ For this particular auction, Phillips couldnâ€™t have done this without Tumblr and Lindsay, and Lindsay couldnâ€™t have done this without us, and so on. We three together was what was so essential, and without one componentâ€¦ this auction would not be a reality.

All coincidence of overlapping interests and timing aside, what Paddles On! presents to audiences â€“ both familiar and new â€“ is that artwork made and distributed through digital networks must now become more vocalized and represented within a contemporary art market. Many recent signposts have been pointing to this moment â€“ the heated conversation around Rhizomeâ€™s booth at the Armory in 2011, the outrage of artists and academics railing against Claire Bishopâ€™s misinformed â€œDigital Divideâ€ essay in Artforum, the development of the Art Micro Patronage project by The Present Group, the selling of digital art by AFC at NADA this past year, just to name a few. But now it is happening, and already over half of the works have been bid on through Paddle8 â€“ a sign in and of itself that now seems to be the time.

But then what? Letâ€™s say a majority of the work sells at or above its reserve, what does this signal for both contemporary art and digital artists hoping to bring their work to a larger audience? My initial doubts and concerns for this auction is that it might shape a future aesthetic, or else inadvertently dictate a kind of digital art that is only interested in going to market. I realize that this concern cannot be reserved just for this medium, and instead should be a broader reflection on the ways in which market politics and finance can and will always influence the strategies of emerging artists. However the artists in this exhibition were specifically selected not only because of their contribution to the field, but also due in part to understanding their longevity within an ongoing conversation of art making beyond digital media. Again, my fears are further appeased by Ms. Newcome in reference to a studio visit she recently had with contributing artist Mark Tribe:

Although I initially felt that this auction might seem somewhat opportune,Â the three organizers of this exhibition suggested thatÂ the more important consideration must come from how this auction will – at its heart – help bring digital art to an audience wanting to participateÂ in a conversation that for too long has stood at the periphery. The resounding â€œfinally!â€ that has come from many artists, curators, gallerists, and academic is a testament to Paddles On! working towards an overall positive goal. Although I hesitate to defend the auction based upon my own knee-jerk reaction against commercialization of work made online, I do laud the participants and organizers for putting their absolute best foot forward. It is a rare instance that many people get to witness a community come into its own, and I felt that when I walked through the exhibition of the 20 lots for sale on Friday that I was indeed witnessing an important moment for all those involved in this endeavor.

To that end, I feel as though Ms. Howard put it best when articulating her excitement for this event to unfold:

Even if no piece has sold, or if we got no bidsâ€¦ having all these people rally up support, educating collectors, having the conversation, bringing in more people into the loop, makes this all a success.

In this spirit I wish all the artists the best of luck on Thursday when the live auction kicks off at 8pm at Phillips’ gallery on Park Avenue. I hope that the success of the event – as Ms. HowardÂ eloquentlyÂ suggests – will mark a new beginning for an ongoing relationship between the digital art community and the contemporary art market.