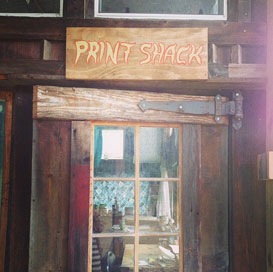 Baby, that’s where it’s at

As any ACRE alumni knows, the screen printing studio is one of the most utilized facilities at the residency. It takes a printing and organizational maverick to deal with the onslaught of projects from residents who realize the potential for t-shirt making inside of the humble studio. 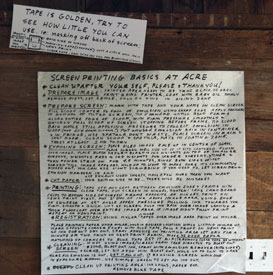 During Session 1, artist Carrie Vinarsky left an indelible mark on the studio. Affectionately dubbed “Print Shack” by Vinarsky, the studio experienced a renaissance. Never has such organization been seen in the tight quarters of the studio. Among her many improvements, Vinarsky championed the baby oil method and encouraged the use of the Print Shack porch for printing and socializing. 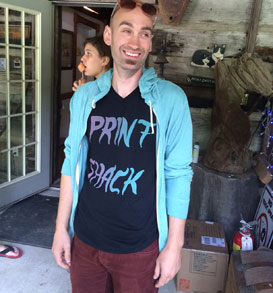 Even in the face of much automotive adversity, Vinarsky kept the Print Shack a little old place where we could get together. Print Shack, baby. 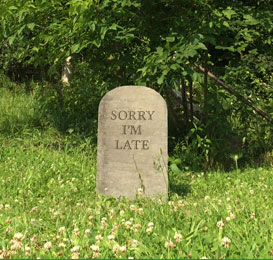 The Posey/Sweet Family Cemetery located on the grounds of the ACRE Residency is known as a place of individual contemplation. Maybe the site of the odd grave rubbing or two.

During the first session of this summer’s residency the cemetery has seen more action than it probably has since 1855. First, visiting artist, Nicholas Frank, held a discussion on animation, rocks, ticks and morality near the big tree in the cemetery the morning of Thursday, July 17th. Attendants considered turning the world upside down and whether or not rocks are baby or grandfather mountains. 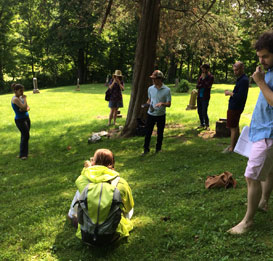 “Frank” conversation in the cemetery. 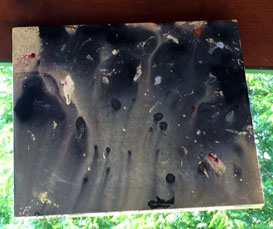 Frank later held a candlelight procession to a new grave site next to the residential lodging where he placed a stone with an inscription that reads “Sorry I’m Late.” Other residents chipped in their own anecdotes of special rocks to bury. In Frank’s words, “Sometimes just being alive can feel like an accomplishment.”

During open studios on Saturday, Shawn Landis, held a solemn performance at high noon where his fellow ACRE-ites pulled him up the hill at the entrance to the cemetery. Once at the top, Landis slid down the hill on a surprisingly sturdy sled made of ice, wooden slats and fabric grips. Later that afternoon, Landis lightened the mood in the cemetery and invited others to slide down the hill on his ice sleds. 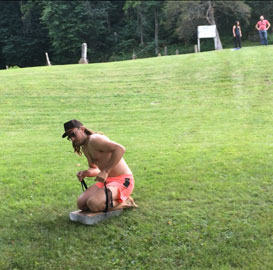 Landis was last seen at the foot of the Posey Sweet hill wearing a baby blue speedo.

Will it ever end?

With rumors of the polar vortex returning to the Midwest, residents couldn’t shed their S.A.D. A collaborative from Minneapolis, Negative Jam, embraced the chilly weather and put it to work last Friday night when they hosted Christmas in July. The dinning area was festively decorated with elaborate garnishes and the stage was decked with boughs of holly (and a fake Christmas tree). 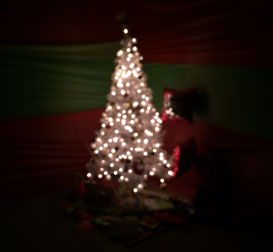 Just like real Christmas, arguably the best part of the evening was the gift exchange. Residents engaged in “Secret Santa”, gifting each other crystallized rocks from around the ACRE property and various trinkets probably scrounged up at World of Variety in Boscobel. Dancing and merriment ensued. 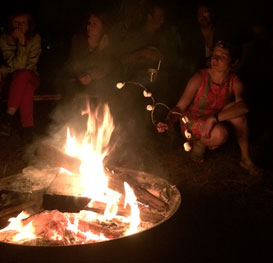 Lauren Walsh keeping warm and browning at least 6 marshmallows at the same time.

Not to be out-wintered by a bunch of Christmas-loving performance artists, artist Shawn Landis, of Seattle decided to take winter into his own hands by fashioning sleds made of ice residents used to “Chill Out”. 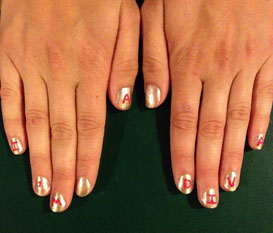 No mistaking Etta Sandry for anything else but.

Residency Not Confined by Physical Reality of Universe. 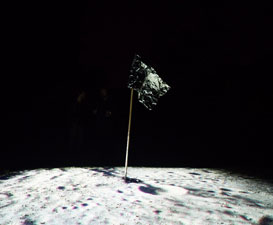 Header image features people having a ton of fun on the bank of the Kickapoo River. 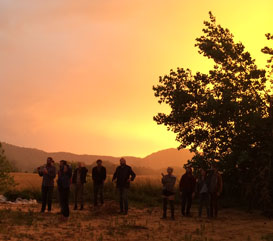 This summer WTT? is going straight rural and spending July and August at the ACRE Residency in beautiful Stueben, WI. Look out for what’s trending in the sticks and what happens when artists stop being polite and start really missing Wifi connection.