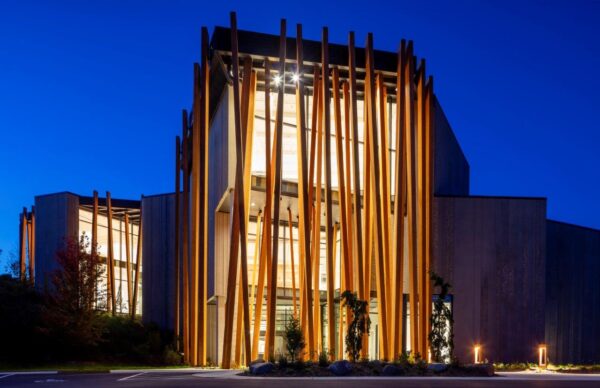 The Kohler Art Center in Sheboygan, Wisconsin would be distinguished enough if it had only remained focused on the folk art and craft of regional artists. Wisconsin has a sizable population of visionary artists and crafters and the Center’s attention to local history is remarkable and enduring. The “art & industry” sensibility of Kohler, notable in part by its visiting artists program at its manufacturing center, underscores a significant spirit of aesthetic collaboration. On June 26th the chronological dimension and cultural mission increases exponentially.

The “Art Preserve,” a 40 million dollar, 56,000 sq. ft. exhibition facility, designed by the Denver architectural firm Tres Birds Workshop, will open to feature the museum’s permanent collection of art environments. Art environments specifically refer to the production of public and semi-public permanent installations, some of which ultimately fall into disrepair if not for enlightened patronage by communities or institutions. A series of striking exhibitions, organized for the museum inauguration, include selections from collage and fiber artist Lenore Tawney, Fred Smith’s Wisconsin Concrete Park, the Nek Chand’s rock garden kingdom of sculptures, and the myth-making garden sculptor Mary Nohl. The Art Preserve is the world’s first institution dedicated to such work and has the largest collection by trained and self-taught artists.

The new facility is the latest stage of commitment to visionary artists and vernacular design traditions and it expands a constituency for an intensely independent, often misunderstood and underestimated studio practice. The Center’s raison d’être of advancement and research on vernacularism and craft, is not merely an addendum to contemporary art, but a reasoned critique of the artworld’s circumscribed discourse on aesthetics and identity.

The Kohler Center was founded in 1967 and its reputation as one of the most innovative and unconventional museums in the country has been constant. For almost it’s entire history the center was run by the late Ruth De Young Kohler, granddaughter of the ceramic industrialist John Michael Kohler. She took the institution from a small craft-focused project in the late 60’s to today’s complex research, production and collaborative organization with a theme that to some may seem niche. The degree of rigorous examination and scholarly publications produced under her leadership, not to mention exhibitions that express the range of radically distinctive artists, is also uncommon.

In 2016, Ruth Kohler stepped away from the directorship to concentrate on making the Art Preserve a reality. In her new role as director of special initiatives, she worked with the incoming director Sam Gappmayer, the board of directors, and Tres Birds architects in the design of the new facility. Tres Birds was selected because it has a deep investment in the social and historical presence of artmaking and a commitment to sustainable building and business practices. Construction began in 2018 but was delayed by the Covid pandemic. This month Kohler’s vision will welcome its first visitors. Unfortunately, Ruth Kohler’s passing in the Fall of 2020 prevented her from witnessing all the fruits of her labor.

The new building sits on about 40 wooded acres adjacent to a forest preserve near the Sheboygan River. The entrance to the stepped, faux-brute facade is enveloped with clusters of towering wooden pillars that allude to the surrounding environment. Tilted against the concrete and stone exterior they foreshadow the idiosyncratic use of materials and processes displayed inside. The complex three-story structure embedded strategically in the hillside, reveals the functional bent of its design while locally sourced timber, concrete, and river stone adopt the improvisational temperament of vernacularism. Its hybridity is precise, self-reflexive, and compliant with formal standards of craft, as well as canny details in the theory of public space design.

Having absorbed early modernist aims of the experimental, functional, theoretical and subsequently environmental, Tres Birds takes a radical turn. The signature element of the Art Preserve’s structure is without question the oversized, variously tilted wooden pillars. While intended to represent the forested acreage around the building, they riff on a deeply rooted symbol of Western civilization. The Greeks built to signify a divinity rooted on earth. Their massive fluted columns echoing the density and surface of tree trunks remained a standard for more than a millennium. The mortal Miesian column was a critical sequencing of the Doric order and indisputably solemn and authoritative. It’s no stretch to find the laminated fir pillars that front the new museum as a fresh rebuff of classicism, particularly the virile forms that the British anarchist, poet, and critic Herbert Read found stuck “in the back of every dying civilization.” Tres Birds features theirs serendipitously as caricatured ruins dancing in the entrance, parodying the logic of negation and wincing at a bit of ethnographic sabotage.

The overall design calls to mind a premise of Robert Venturi and Denise Scott Brown regarding the nature of the post-modern. Their “duck and the decorated shed” analogy featured in “Learning From Las Vegas” was based on two prevalent design models that diverted from classical glass and steel modernism. The “duck” was pictorial and populist and the “decorated shed” bore details of cultural status. While this dichotomy once defined a disciplinary debate about popular vs. elite tastes, the duck and shed are now home on either end of a
common symbolic spectrum. Tres Birds’ strategy of designing a shed that’s also emblematic of its contents demonstrates how cultural paradoxes gradually become unconstrained, informative and pleasurable. How perfect that such vulnerable art projects that ritualize the ordinary and blur the boundaries between obsession and tribute, become catalysts for experimental and sustainable sanctuary. 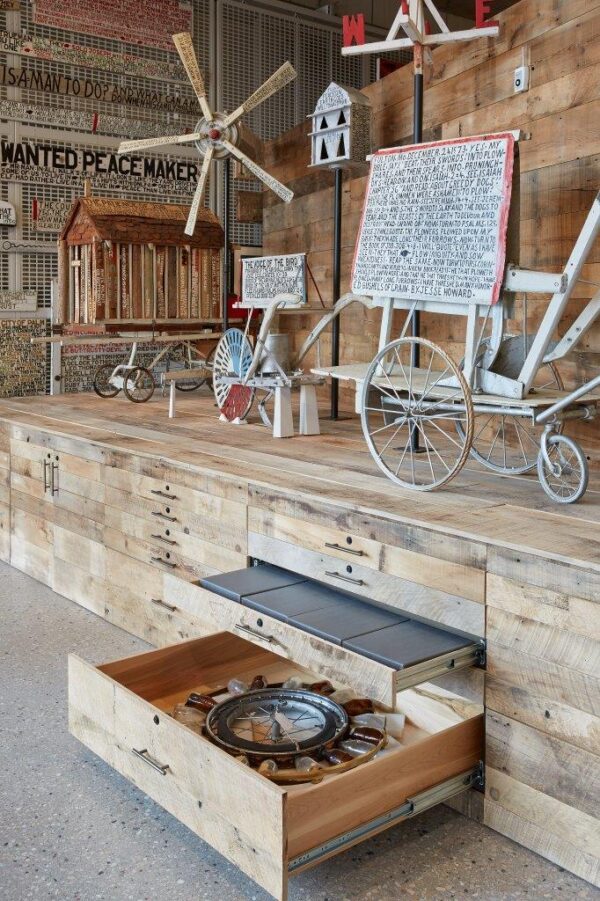