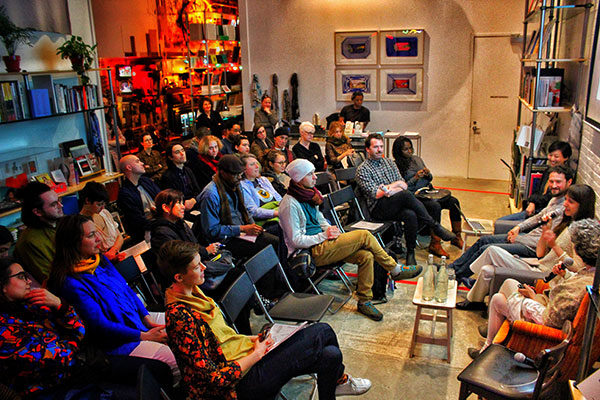 What if the organization of labor was integral to your project?

Members of Meerkat Filmmakers Collective and Friends of Light

Meerkat Media Collective is an artistic community that shares resources and skills to incubate individual and shared creative work. We are committed to a collaborative, consensus-based process that values diverse experience and expertise. We support the creation of thoughtful and provocative stories that reflect a complex world. Our work has been broadcast on HBO, PBS, and many other networks, and screened at festivals worldwide, including Sundance, Tribeca, Rotterdam and CPH:Dox. Founded as an informal arts collective in 2005 we have grown to include a cooperatively-owned production company and a collective of artists in residence.

Friends of Light develops and produces jackets woven to form for each client.  We partner with small-scale fiber producers to source our materials, and with spinners to develop our yarns.    We construct our own looms to create pattern pieces that have complete woven edges (selvages) and therefore do not need to be cut. The design emerges from the materials and from methods developed to weave two dimensional cloth into three dimensional form. Each jacket is the expression of the

collective knowledge of the people involved in its creation. Our business is structured as a worker cooperative and organized around cooperative principles and values. Friends of light founding members are Mae Colburn, Pascale Gatzen, Jessi Highet and Nadia Yaron.

How do artists ensure that their individual and collective needs are met in order to dream, practice, work on, and return to their projects each day?

Adaku Utah was raised in Nigeria armed with the legacy of a long line of freedom fighters, farmers, and healers. Adaku harnesses her seasoned powers as a liberation educator,healer, and performance ritual artist as an act of love to her community. Alongside Harriet Tubman, she is the co-founder and co-director of Harriet’s Apothecary, an intergenerational healing collective led by Black Cis Women, Queer and Trans healers, artists, health professionals, activists and ancestors. For over 12 years, her work has centered in movements for radical social change, with a focus on gender, reproductive, race, and healing justice. Currently she is the Movement Building Leadership Manager with the National Network for Abortion Funds. She is also a teaching fellow with BOLD (Black Organizing for Leadership and Dignity) and Generative Somatics.

Taraneh Fazeli is a curator from New York. Her multi-phased traveling exhibition “Sick Time, Sleepy Time, Crip Time: Against Capitalism’s Temporal Bullying” deals with the politics of health. It showcases the work of artists and groups who examine the temporalities of illness and disability, the effect of life/work balances on wellbeing, and alternative structures of support via radical kinship and forms of care. The impetus to explore illness as a by-product of societal structures while also using cultural production as a potential place to re-imagine care was her own chronic illnesses. She is a member of Canaries, a support group for people with autoimmune diseases and other chronic conditions.

The building entrance, elevators, and 4th floor restrooms have no steps and are fully wheelchair accessible. If you require additional assistance upon arrival, please ring the buzzer outside and someone can come down to help you.