Why does the unicorn have pentagram eyes, Zachary?

Because satanism freaks people out
Because they are evil
Because I worship at the altar of Baudelaire
Because “The Good” is a liar, has always been thus

Because magic is spelled with a “k”

Because empires will fall
Because Capitalism is afraid of Satan, even though it is deeply satanic

Because there are so many things I forgot to say

Because you would never believe me if they didn’t

Because if I told you I would have to kill you

Because some days are better than others

Because fairytales require judgment
and a sentence

Because music is something I hate more than anything else

Because turning away is a turning towards

Because you are unwelcome here!
Get behind me Satan!

Because if I stop breathing for a second, you won’t remember me
So I keep breathing even though maybe, it would be easier if I didn’t

Because I was always afraid of vampires

Because I’m still afraid of vampires

Because I believe in the apotropaic nature of vision

Because unicorns have convinced you that they are harmless

Because glitter is worse

I’m broken
and there is nothing I can do

Because it is my only option

Because I took the wrong path to start doing hard drugs at this point in my life
(too late for that…sorry Charlie, I am not an orthodox Baudelairian)

Because if you wait a thousand years they’ll mean something different
Like, maybe, pentagrams will be a new symbol for currency
If it’s not already
it should be
The sign for money is now presto change-o ta-dah: pentagrams!
Or maybe it’s a sign of stupidity

Because sometimes I go off on a tangent

Because I have no idea when all my hair turned grey

Because maybe that’s what love is
Maybe it is something so scary, fire-breathing, and  mystical that you have no idea what it is when it is looking right at you 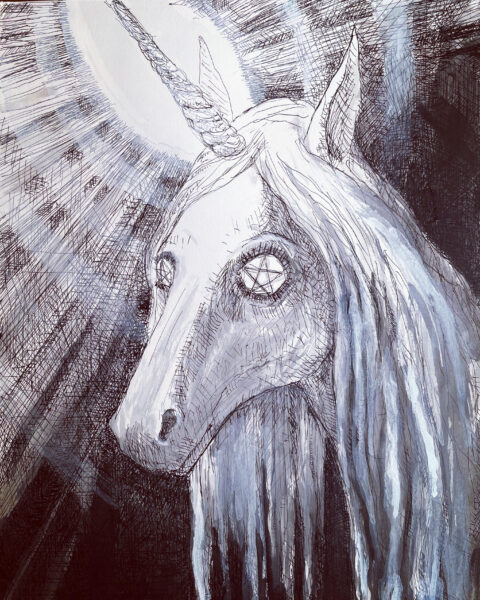