The Kingdom of Kitai at Ulterior Gallery

The Kingdom of Kitai at Ulterior Gallery in New York’s Lower East Side opens the tiny gallery like a tunnel to narrative artist Gaku Tsutaja’s world. Though the kingdom is fictional, Tsutaja uses her father’s experience as a civil engineer in Tokyo, and later Fukushima, to create an allegory for Westernization and catastrophe.

In the first room nine wooden organ pipes hang roughly two feet apart from each other, and in the center of the room an oversize kettle sits on a small, simple table. To the right appears to be a slender wall cabinet with a green roof hanging over the sliding windows. Displayed inside are circular tags each with a ink drawing depicting a beaver, mole, or groundhog. The dignified portraits of the humorous characters wear construction caps and goggles. 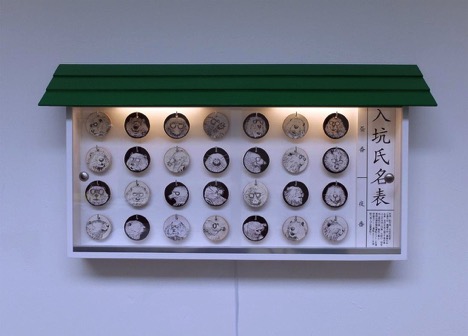 From the organ pipes a 48-minute sound installation tells the story of these construction workers in The Kingdom of Kitai. Each of the nine pipes represent a character and one by one they tell us their role in the operation. Some of them express an anxiety over the fast pace of new tools; others are optimistic. Midway through the narrative an explosion occurs, and the characters search for the missing. Emanating from the belly of the pipes, it sounds as though they are located somewhere underneath the gallery, as though in the network of MTA tunnels below.

In the back room a series of 12 ink drawings grouped on one wall depict events during the construction of the tunnel. In Workers for the Future, the workers gather for a group photo in front of the tunnel’s entrance with such a presence it is hard not to imagine the real workers in the source image from which Tsutaja drew.

The kettle’s central position in the gallery perverts its traditional, communal symbolism. Instead, the pot appears to command the workers, participating in the implementation of this new Westernized method of construction. These gestures in Tsutaja’s Kingdom of Kitai deliver a wry and witty translation of a global struggle against greedy corporations and labor exploitation, a story which Americans must find more imperative to confront. The Kingdom of Kitai is on view at Ulterior Gallery in NY through October 22nd.