In her recent memoir poet laureate Elizabeth Alexander wrote of her deceased husband, “he left us with his eyes on the world.” He was a painter. 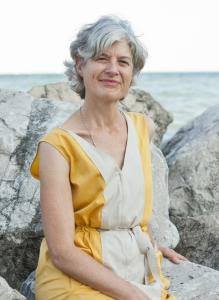 Deborah Boardman (1958 – 2015), who once described herself as a “painter and…” worked in Chicago for nearly three decades. We saw her “eyes on the world” through solo exhibitions at the Gahlberg Gallery at the College of DuPage, the Chicago Cultural Center, Ebersmoore, and, most recently, the Experimental Sound Studio to name a few that were local. There were many more nationally and abroad. An educator at the School of the Art Institute of Chicago since 1997, she influenced hundreds of artists, some of whom became her collaborators.

Deborah worked across painting and drawing, installation, writing, environmental sustainability and sound/video, and she often employed dowsers to “map” her installations. Through it all, she became known for her approach to color, pattern and poetic text as vehicles for emotional content and narrative potential, as well as a uniquely gestural approach to mark making and hand lettering. Years ago, Deborah was of the first Chicago-based artists I discovered utilizing the bookform in a way that I found captivating. And as critic Lori Waxman wrote recently, newer work addressing her struggle with cancer grappled with the unseen and ineffable, articulating “what life looks like in that gracious limbo between life and death.”

Testimonial after testimonial gives evidence that Deborah’s “fierce,” visionary and “generous” creative ethic was not confined to her artworks, but also it governed the lived spaces of her life as an educator and collaborator: there are the students she engaged as her studio interns and treated like family; the friends with whom she sang joyfully in her living room and purposefully in the gallery; there were the women artists’ reading and figure drawing groups in the early 1990s; a spectacular dance party at Oxbow; “meaty” collaborations over years and years, and the concurrent friendships that burned slowly and brightly; pivotal residency and art-making trips to India to learn things like Vastu and develop exhibitions like Magic Mountain at Bangalor and Rooting: India with Akshay Rathore and Tricia Van Eck for the Kochi Biennale. Morning walk after morning walk to Albion Beach with her beloved dogs. The students she taught to write grants, not to “overpaint” and to make artists’ books. The yoga, meditations and gurus: she was a Catholic child turned seeker, spiritualist. 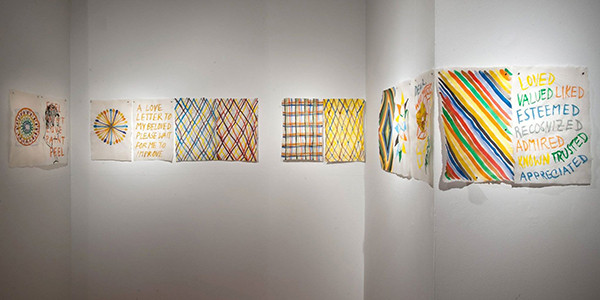 Perhaps the sum of the many, many contours of Deborah’s art-making life is this: in each studio visit was an implicit gift; embedded in every syllabus was an invitation; in each collaboration an emergent provocation; and in every artwork a public offering, a lesson.

My relationship with Deborah grew over six years or so through some group shows I curated, periodic studio visits and friends in common. But was in the last eight weeks of her life that she, her family and close (and by close, I mean indescribably loving) friends invited me into the more intimate dimensions of her life to begin to do the curatorial work of considering her oeuvre, to embark on a deep engagement with her work in order to develop a retrospective exhibition down the line. To begin to locate the magnitude of her influence, position her output within a broader historical and social context, and to understand the genesis of her work over decades—is a project I am coming to understand through a new and fascinating curatorial lens and as my own biggest collaboration with Deborah.

Deborah worked through her final days of treatment and hospice—finishing her memoir, setting into motion plans for a new sound installation and making her last exquisite painting with the help of those at her bedside. By all accounts her fervor was punctuated with wit and that inimitable smile.

In an artist’s book produced for a recent exhibition at 6018 North, Deborah wrote: “Xavier Le Pinchon, a plate tectonic expert, suggests that fault lines, the open spaces between the plates in the earth’s crusts are… analogous to human frailty. Because we are vulnerable, we find it necessary to depend on others for survival. It is through our vulnerability that we bond with others and thrive.”

Deborah’s work had many facets, but it is her brave articulation of her own perceived faults, frailties and vulnerabilities—her commitment as an artist to learning in public—that will demand of us and viewers of her work for years to come a deep reciprocity, a Deborah-like generosity. Through these exchanges—made possible by the “work” of her artwork—she will live on and her ideas will continue to shape the world in meaningful, collaborative ways.