Gavin Brown at the Green Gallery in Milwaukee 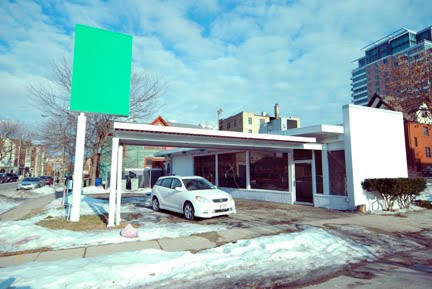 Given the post-holiday lull and the unusually inhospitable weather â€“ see: â€˜polar vortexâ€™ â€“ Iâ€™ve been pessimistic about going art foraging lately. Fortunately, during a recent day of hibernation I loaded up Werner Herzogâ€™s â€œHappy Peopleâ€ about residents of Siberia living in Neolithic conditions, and my post-holiday disenchantment melted away.

â€œIf these people can make snowshoes from fallen fir trees and catch mink with snare traps, I can’t complain about how long it takes the interior of my car to heat up.” So vortex be damned I drove to Milwaukee to attend the opening of Gavin Brownâ€™s exhibition at the Green Gallery.

Normally I wouldnâ€™t frontload a review with biographical information offering details of the artistâ€™s day job, but in some cases, ignoring such information is an even greater distraction than the alternative. Like when Jay Z went on his performance art jag. If you reviewed â€œPicasso Babyâ€ without recognizing Him, the all-out genuflection of the art world in those ridiculous videos would seem especially absurd. Or when Dylan had his show at Gagosian, they had to begin the publicity release with an acknowledgement of his cultural significance outside the painting world if only to pacify the elephant in the room.

This is the case, if to a slightly lesser degree, with impresario, gallerist, taste-maker, and now artist, Gavin Brown, whose show, (which seems eponymously titled, though might not actually have a proper name??) runs through March 2. For someone crossing over, Brown appears to have a genuine sensitivity to the psychological possibilities of video. Though his installation is demonstrative and dramatic, it is deftly paced and masterfully controlled. â€œGavin Brown,â€ or whatever the show is called, is a subtle journey that leaves a far less subtle psychic residue.

But to get this resounding impact, one needs to bathe in his work without distraction. This happened to be an impossibility at the opening of the show, when the gallery teemed with revelers, forced inside by extreme cold. The installation features two independent projections: one on the shortest wall of the triangular interior, and another that 360â€™s the gallery like a lighthouse beacon at about eye-level. This, along with its shrill soundtrack of screaming and pulsating alarms, made it impossible to totally escape the presence of the work at the opening, though visitors using the show as a social engagement tried anyway. 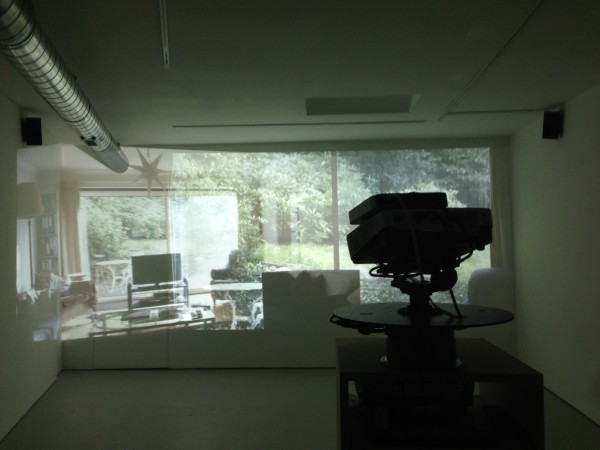 Gavin Brown at the Green Gallery

The Green Galleryâ€™s John Riepenhoff speculated that the clumsy Beckett-esque interaction with the audience might have been intentional, symbolic of the artistâ€™s own relationship between viewers and makers. To what degree this is purposeful, it happens to be an incredibly generous metaphor.

A review by Michael Horne in Milwaukeeâ€™s, Third Coast Daily corroborates the tenor of the evening.

â€œAt one point the projection was accompanied by many, many minutes of fire alarms or smoke detector signals, a bit hard on the ears in the whitebox gallery. People of a certain height (4â€™-7â€™â€™) might also find the harsh glare of the rotating projectorâ€™s lens a bit hard on the eyes as wellâ€¦But this mattered not to the mostly young and enthusiastic audience. Plus, for escape, the back room of the gallery offered a sparse gathering space for networking, conversation and carbonated beverages.â€

More impressive than any statement about the awkward relationship between opening receptions and ideal art viewing, is the full, unadulterated experience of Brownâ€™s work, an opportunity I had several days later when I returned to the empty gallery.

One is prone, even if a veteran of non-narrative video art, to search for continuity. Even moreso in Brownâ€™s piece, as each of the videos is comprised of panning shots of a single domestic interior. A somewhat distressed womanâ€™s voice initiates the disquieting experience to come. One naturally assumes the perspective of this invisible presence and inhabits her throughout.

If the opening was a real model Panopticon, the projector chasing imprisoned spectators around an actual enclosure, the piece without an audience is a virtual prison, the viewer trapped and becoming ever more paranoid with each revolution of the swiveling projector.

One might call it suspense, but thereâ€™s nothing building or changing. Besides a book whose cover reads â€œKeep Calm and Good Luck,â€ and some devotional statues that might be on lookout, thereâ€™s no sign of anything but comfort and safety. But the point of view and the scanning motion, that is, the form of the piece, does what one might normally expect from content. What one expects is some kind of a problem. Some kind of disruption. We grow fearful of whatâ€™s outside. When an occasional car rolls up the streets outside the house, it feels sinister and phobic.

What is the relationship between the two shots? Theyâ€™re of the same prosaic interior, so one can’t help but toggle nervously between the two searching for a sign of incongruity, which, in this context, would be problematic. This creation of this context is Brown’s achievement. Why not expect a welcome guest? Why not a surprise birthday party or children coming from playing outside?

Because we assume the cameraâ€™s point-of-view, which is scanning, not looking. And it feels defensive, so we feel paranoid.

Ten minutes in, the persistent continuity is finally broken on the main wall by a series of close-ups: a locked window; a staircase; an airvent; a leaking hot water faucet. Each is accompanied by its own irritating alarm sound. With the broken silence, anxiety redlines to the point that one locks up and comes to, finally resetting and reorienting with the real interior. The one thatâ€™s been built out to hide any trace of natural light or hint of the outside world. The one that feels like a bunker that is closing in. And one wants out. At least IÂ wanted out. 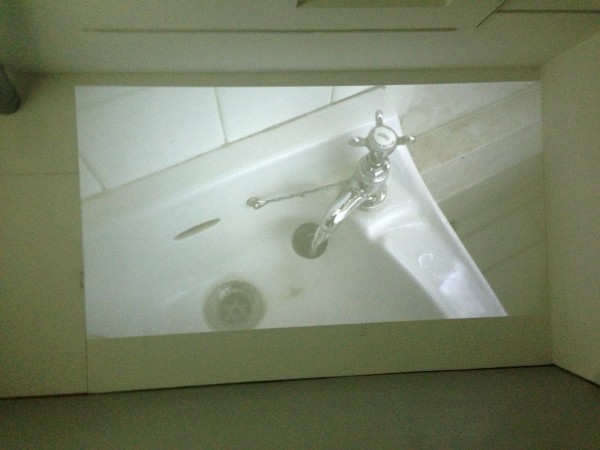 Gavin Brown at the Green Gallery

Out where it was 4 degrees and nearly as oppressive.

I donâ€™t know how many strata of meta Gavin Brown intentionally planned on laying down, but they worked to great effect, getting me just a few steps short of cabin fever.

Not a bad first effort for someone best known for showing other peoplesâ€™ art.