The Wisconsin Triennial and the Value of Context 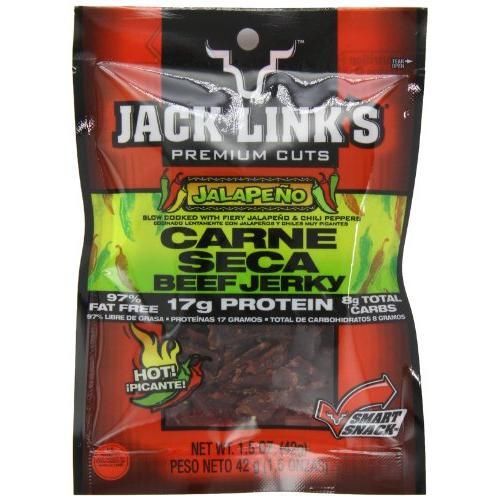 Iâ€™m still in the process of attending all those shows I recommended in my Wisconsin fall preview a few months ago. Itâ€™s difficult for even the most dedicated art nerd to cover a state as large as Wisconsin. Because of this Iâ€™ve picked up the habit of turning my art excursions into comprehensive road trip experiences with an ever-evolving set of rituals: check the weather; load the podcasts; fill the travel mug with coffee; plug address into the GPS; pick up the jalapeno flavored beef jerky and two bottles of Dr. Pepper from the Speedway convenience store.

My most recent performance came en route to the Wisconsin Triennial at the Madison Museum of Contemporary Art (MMoCA.), when I listened to a podcast on medieval history from iTunes U and scorched my mouth on jerky â€“ I think I forged a permanent association between a swollen, stingy tongue and Pepin the Short. I pulled into Madison on the one-year anniversary of seeing Leo Villarealâ€™s sensational show there last year and I hoped to match the pleasure again on that afternoon.

I immediately recognized the work of Madison local Derrick Buisch in the first floor gallery of the Overture Center, where MMoCA is housed. His wall grid of small paintings quickly goes from quirky illustration to chewy examination of the relationships between painting, graphics, gesture and text. The piece, called â€œ77 Monstersâ€, forces one to consider the subtle differences between seeing, looking, and reading. Adjacent to this, an eccentric construction by artist Paul Sacaridizâ€™s complements Buischâ€™s 2-D work nicely. It has the same formal sensibility as Buischâ€™s, only in three-dimensions and with a touch of Vladimir Tatlin. 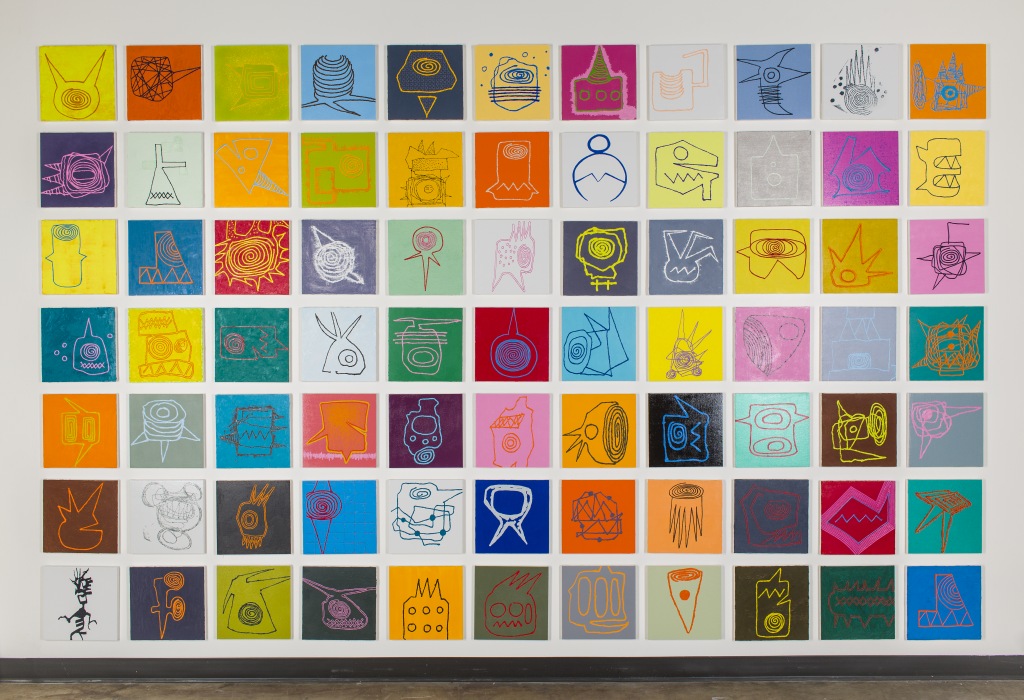 On the third floor, home to the majority of the show, I was especially moved by a video installation by Madison artist Chele Isaac, titled â€œThe End of Angelsâ€. The surreal, dreamy work is reminiscent of Janet Cardiffâ€™s and George Bures Millerâ€™s moodiest dioramas. Around the corner, Justin Bitnerâ€™s sculptural installation aroused my suspicion of sculpture made of tube televisions, though he sidestepped the oft-overdetermined application of the tube as a nostalgic bauble, or a naked symbol of media overload, by using its hissing analog snow as the soundtrack for a video of crashing waves. A rare and interesting use of television as a sonic rather than visual medium.

Nearby three photographs of hunting shelters by artist Jason Vaughn cheekily bring together the dissonant languages high-modernism and Wisconsin hunting culture. His photographic treatment of the structures gives them a personal, even sentimental feel, but his compositional framing of the them suggests something more monumental. The location of the work struck me as a superb curatorial counterpoint to Vaughnâ€™s growling TV sets which could be faintly heard on the other side of an enclosure. 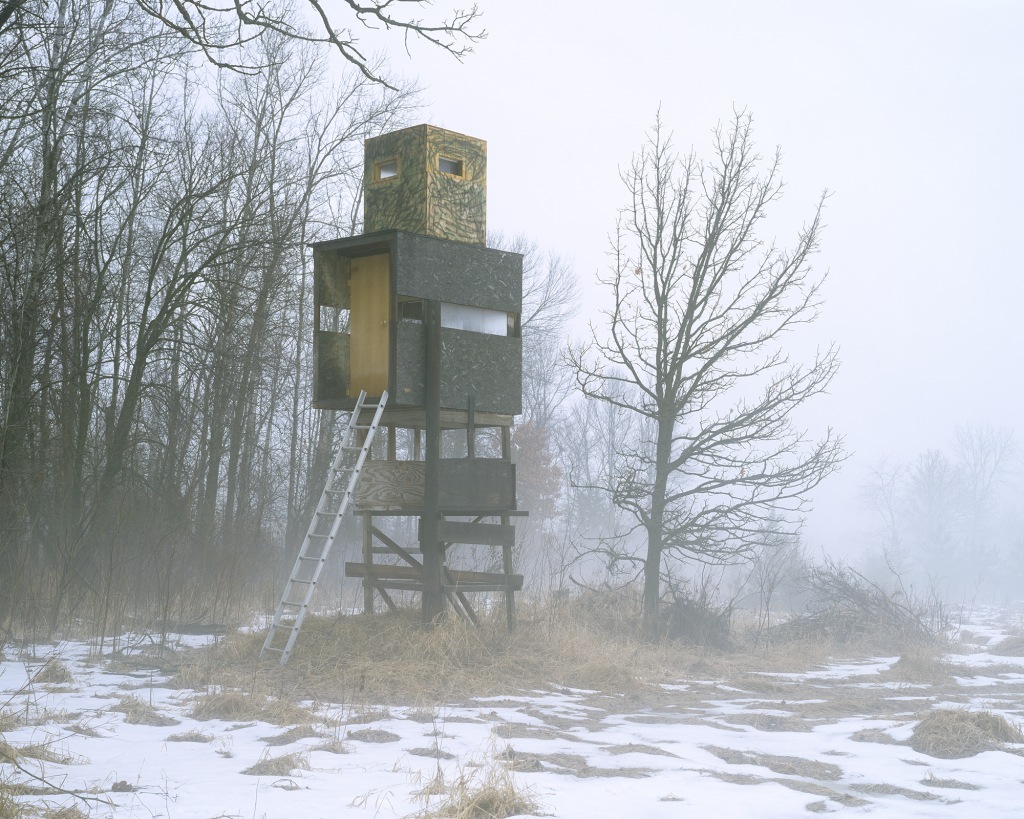 I was asked to leave at closing by an attendant while I stared transfixed into a light box photograph of a cinder cone volcano (?) by Stephen Hilyard, wondering if and to what degree the image was digitally altered. I still donâ€™t know for sure.

I think one could do worse that to be prodded out of a museum satisfied but still looking for answers.

Two weeks later, I was checking the weather for Milwaukee on my iPhone. â€œTwo degrees,â€ said Siri in her tinny voice. I laughed smugly as I read the gauge on my rented Dodge Caliber. 82 degrees. Schadenfreude. I was heading to Miami Beach, and the yearly spectacle of the art fairs.

Art fairs in Miami have proliferated like Tribbles over the past decade. There are too many now to see over the entire week. One could spend days at the main Basel fair alone. I spent three hours there and canâ€™t tell you now if the images in my head are from this yearâ€™s fair or lastâ€™s â€¦or from a visit to a museum prior to that. I spent hours at five other fairs as well, but I lost steam as each booth and tent passed. Thereâ€™s not enough space here to describe the full scope of the Miami circus, and plenty of others are taking on that task for me anyway. Itâ€™s enough to say though that one couldnâ€™t have a great art experience under the conditions in Miami anymore than one could have a deep philosophical conversation at their own wedding reception: itâ€™s too fast, too disjunctive. The mind turns into a dispatcher of information rather than a feeler or processor of it. 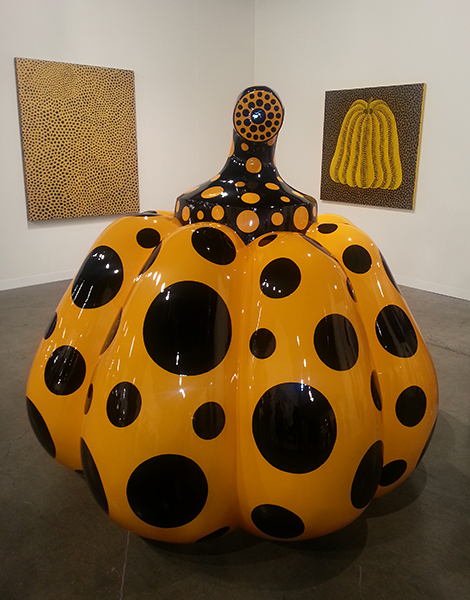 Another ABMB, another Yayoi Kusama

Eventually, the absurd undertakings in plastic surgery take over and you start planning your trip the beach.

Which is where I lived out the final hours of my short trip.

When I was a kid, I lived in with my family in a pine forest in Window Rock, Arizona for a while. It was isolated and deprived of modern commercial pleasures. On the weekend weâ€™d drive to Albuquerque and I would ritually indulge in the travel luxury of a bag of pine nuts sold to us from the side of the road. Albuquerque was a two hour drive, and if I extricated 11 nuts from their shell with my teeth during that time, I was lucky.

Now I can get a grocery sack-full of shelled pine nuts at Costco for 6 bucks. And I hate them. I donâ€™t even like them on salads.

I donâ€™t care what all the idealist critics say about the autonomy of art. Bullshit. Context and ritual matters.