Tom Dale and the castle of bouncing ideas 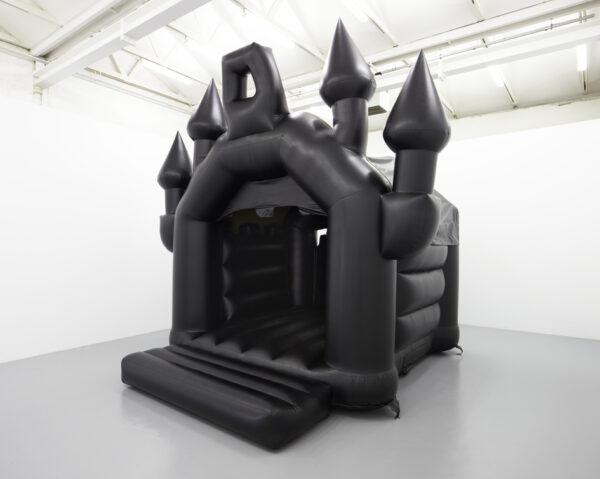 Photos will not prepare you for Department of the Interior by Tom Dale, nor will the description: a bouncy castle made from black leatherette. But stepping round a corner at Aid & Abet, Cambridge, UK, there it was, roaring with the sound of an air pump, trembling slightly, inviting allcomers.

â€œYou canâ€™t access this piece,â€ says Dale, â€œYou have to imagine that youâ€™re bouncing on it, which is twitching the nerves between the brain and the fingertips.â€ So black leather, as he acknowledges, has never promised so much fun.

This is troublesome. Dale describes the viewing experience as â€œalgebraâ€, in which you gauge your own reaction against those of other people. â€œWhat Iâ€™m interested in is an examination of yourself as well as what we see before us.â€

The London-based sculptor identifies two opposing pleasures at work here. Along with the idea of a kidsâ€™ party, There are he points out â€œS&M overtonesâ€. One is a public activity, the other very private.Â â€œWhat I think is interesting about the work is it traps two opposing forces,â€ he says.

In many ways it is this potential for the tasteless which led to the workâ€™s creation. Dale uses the word â€˜wrongâ€™ as if the castle is a moral error: â€œWhen something is wrong, we are drawn to engage with it. When things are wrong, we want to put them right,â€ he says. â€œWe want to put the house in order.â€

And yet bouncy castles are a fine metaphor for our current circumstances. They represent the soft power which governs most lives in the West. Bright colours and shrieking kids tend to obscure this, but in forbidden leather thereâ€™s no mistaking the work of a hidden hand.

There was nearby another monumental piece in which power was hinted at rather than demonstrated. This was High Noon, a red carpet bearing the footprints of a missile launcher: a cruciform image from the crushed and oily outlines of a very heavy stand.

Research is critical for Dale, and he demonstrates as much with a knowledge of obsolete military hardware. He tells me the imprint of this launcher was for a Thunderbird, developed in the 1950s, the last surface-to-air missile that Britain produced.

The artist compares such technology to the convoluted mechanical fantasies of Victorian artist Heath Robinson. â€œYou would fire it into space and press a button and the nose cap comes off and it throws a chain net over the airplane that it’s nearby, which is kind of amazing.â€

â€œWhat working on this scale has taught me is that you need to do your research. You need to go to places. You need to visit people who supply the materials or the vehicles or the objects you need,â€ he says. This lets Dale take resulting decisions on a level he calls, â€œVery microscopic.â€

As with Department of the Interior, High Noon invites and frustrates a desire to step on board. â€œItâ€™s kind of like a homeopathic pill,â€ says Dale of his cold war trace. So perhaps what both pieces lead to, in their playful way, is an immunity to fear of power structures.

Armed with a recent PhD, Dale is ready with plenty of theories about the effects and the workings of his chosen art form. But according to this audacious sculptor, what he does relates less to philosophy than it does to knowledge.

â€œIt’s about how we organise, how we arrange things, how we fit into these things that we know,â€ he says. â€œThese works here are, if you like, knots or joints of culminations of a certain kind of knowledge, but then it becomes dissolved.â€Â So, again perhaps, an apparatus of knowledge cannot always stand up to critical engagement, certainly not to comical engagement.

In conversation with Dale, you find he moves nimbly from metaphor to metaphor, and never without a sense of humour. So he will also describe his works as, â€œbeing like a ventriloquistâ€™s dummy, but when I take my hand out they’re still telling me thingsâ€.

As for the contest between the monumental works he brings to the gallery, and the virtual realm in which we sometimes occupy, Dale states his intention to, â€œproduce an object that releases ideas or discusses things in a different way at a different speed, with a different currency.â€

These are left field works from a left field talent. By way of an aside the artist puts forward his latest theory of mind: â€œIâ€™m beginning to think that our brain exists outside of us as well, that itâ€™s almost like we have an invisible unicornâ€™s horn type brain.â€

â€œI think thereâ€™s a brain which only exists when we start to speak or when we start to act,â€ he continues, â€œMaybe I need to work on the formal construction of that a bitâ€.Â It does sound like the starting point for another push-me, pull-me sculpture, the visceral brain by Tom Dale.