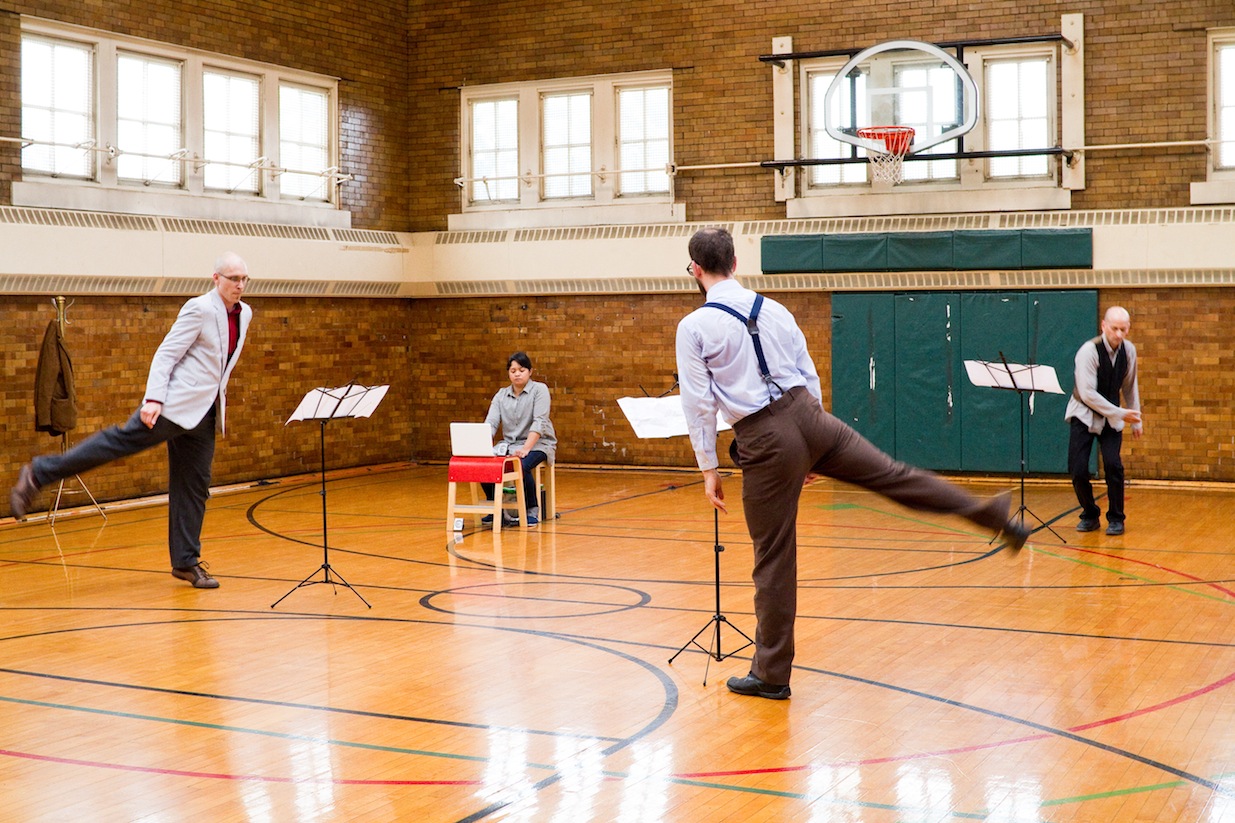 This weekend, Every house has a door will be performing their original work, Mending the Great Forest Highway, onÂ February 15 and 16 at 8pm, and then again on February 17Â at 7 pm as part of the IN>TIME festival at Links Hall (3435 N. Sheffield Avenue) $15 general/$10 students. For information on this and other upcoming events, please visit IN>TIME’s website. You will find an interview between myself and Matthew about this same piece on the Art21 blog here. More recently, Matthew submitted the following piece of writing aboutÂ MTGFH’s latest iteration. – B@S

When people ask about the name Every house has a door, I say it has to do with aesthetic hospitality. In a sense the name stands as an invitation, and the invitation takes two parallel courses. First, each performance as a project assembles a team of specialists in response to the specific demands of that performanceâ€™s set of ideas. In this way, the company remains open like a house, and collaborators come and go like visitors. Second, each finished performance demonstrates our ongoing interest in separating the elements of performance and weaving them in some configuration particular to that work. Different aspects of the work may appeal to different audience members. In this inflection, each mode offers a different door, standing open for a different audience member as an invitation into the house of the performance.

We made a performance called Theyâ€™re Mending the Great Forest Highway. The Chicago Dancemakersâ€™ Forum supported the original version, because choreography lent this work its core. We borrowed the title from a song by the twentieth-century composer BÃ©la BartÃ³k, but the choreography derived from his trio for clarinet, violin, and piano, Contrasts, composed in 1938 in response to a commission by Benny Goodman. We had the idea that three men would dance the parts of the three instruments, transposed from music to movement, adhering to the compositionâ€™s precise timing. Brian Torrey Scott danced the part of Benny Goodmanâ€™s clarinet, and John Rich that of Joseph Szigetiâ€™s violin. We listened to the original recording by those great musicians, with BartÃ³k himself on the piano. I claimed that part for myself. It was only fair. I had worn out the record through repeated listening in my undergraduate years, and already had it nearly memorized.

We presented the piece at the Holstein Park field house gymnasium in June 2011. Lin Hixson had guided the three of us in the first months of rehearsals, giving us directives for generating movement to retrofit to the score. The directives suggested a second degree of translation from the music; for the first movement: a dance in daylight, movements of labor, social/club movements, army recruiting song; for the second: sounds of a summer night in the country; the flitterings of nocturnal frogs, automatic insect chirping, a bird taps its beak on a hollow wooden tree trunk â€¦ concentric circles â€¦ restful â€¦ volcanic â€¦ human singing rises from far away in the darkness; for the third: the fast dance, furious, interrupted, side-slipping tri-tones reminiscent of the end of Bergâ€™s Wozzek.

We invited Charissa Tolentino to compose a score that combined found sounds and samples with original sonic inventions, and to present this live, sharing the stage like a DJ with us dancers. This music, twice removed from BartÃ³kâ€™s composition, responded to the movement, largely free from the scoreâ€™s constraints, but retaining its broad structure.

Finally, Lin and I collaborated on the writing of an extensive prose introduction. For this part, she, the director, would speak directly to the audience, detailing our intentions and processes, as well relating relevant, if somewhat fictional, autobiographical background from her directorâ€™s notes and journals. Lin would not deliver this herself, however. Instead we invited Hannah Geil-Neufeld, a young performer whom we had known since she was a child, to perform the part of the director Lin Hixson. We had in mind a contemplation of youth and aging, with which the introduction concerns itself, as well as that strange area in which the familiar becomes just unstable enough to appear unfamiliar. Hannah returned to conclude the piece, after the roughly 21-minute dance, with an epilogue that included all the performers in the staging of the last momentâ€™s of BÃ¼chnerâ€™s Woyzeck, taking those liner notes literally. Guided by the tone of Hannah-as-Linâ€™s semi-autobiographical monologues, a tone lifted from the dual inspiration of J. M. Coetzee and Robert Bresson, the piece somewhat unexpectedly became an indirect meditation on the fraught and sometimes brutal relations between generations, the anxieties of production and reproduction.

We finished the dance today.

I didnâ€™t think it was about mending when we started. I just liked the title.

Now think that thinking that â€“ that the dance was in fact about mending after all â€“ was what stopped me there on the sidewalk in the rain.

So says Hannah-as-Lin near the end. Each element â€“ words, dance, music â€“ had their own life, their own independence on the stage, no one of them as Â accompaniment to another, and often not even happening at the same time. Each performer, or set of performers, had been delegated to one of these modes. I hope the house/door metaphor is clear now. To divide the finished performance from the process of its creation is largely an artificial exercise, but one that helps clarify our intentions and the workâ€™s meanings and energy. The introductory speech makes some audience members impatient for the dance to begin. Others concentrate on the music as central, and still others need the words as their anchor. The piece asks everybody to assemble the parts into a coherent whole after the 65-minute structured sequence of their presentation.

Now we return to the piece for three performances at Linkâ€™s Hall on February 15, 16, and 17, as part of the IN>TIME Festival, and with the support of an Illinois Arts Council fellowship. Brian Torrey Scott has moved to Providence, Rhode Island. Jeff Harms has taken over the violin part. Charissa Tolentino has also departed the piece. Now Liz Payne performs the DJ role, with her own original sound composition. In this series of rehearsals, Lin has asked us to revisit the third movementâ€™s choreography. She put it this way in an email from January 2nd:

At our next rehearsals, I would like to work on new choreography. Below are YouTube sources for these new movements, divided between Lower Body and Upper Body. I used the Mending video from Holstein as a reference to locate the choreography Iâ€™d like you to change, embellish, or hybridize. Many, many thanks, Lin

Jeff
30:57 – 31:35
Embellish the repetition of this movement using the Lower Body sources.

John and Jeff
31:56 – 32:24
This is after the shaving bowl move and around 28 seconds of material. Keep all your timings and positions in the space but consider using a different vocabulary from the Upper Body sources. So, for example, if you are doing something together this would remain. What you are doing would change.

Lin sent three links for each source, but I have only included one of each type here. I asked the performers about their thoughts on returning to Theyâ€™re Mending the Great Forest Highway. John responded with this paragraph:

I counted my jumps one day. There are several hundred â€“ not big jumps, mostly hops. I did not realize this in making the piece, did not realize it even until well after we finished and someone pointed it out. The dance acts as an accumulation that way. It is a complex field, but it is built by simple acts.

The way in which I am finding the meaning of the piece is a physical process, born of patience and repetition. It seems that the art world often replaces meaning with â€œintentionâ€, as if we were all in art school, or as if we all agreed on the path or even method art should use. The methods of Every house seem to be humble in this regard, and I think itâ€™s for that reason, if we do succeed here, it will be a rich and meaningful experience for the audience.

In the years since we began working on this piece until our February performances, Hannah will have nearly earned her entire undergraduate degree from Macalester College. She answered this way:

What is exciting to me aboutÂ Theyâ€™re Mending the Great Forest HighwayÂ is the realization that one can mend something without being entirely sure of what one is mending.

We have been working for almost three years now to mend somethingÂ that was not oneÂ thingÂ to begin with.Â  This is like darning a sock that does not exist before one begins to darn.

Bodies engaged in speaking the thoughts and dancing the labors of other bodies is, I think, necessarily an act of mending, regardless of the thing being mended.

We prepare for February by rehearsing, I imagine the way musicians would, our collected movements, playing and replaying them alongside Lizâ€™s composition, to fix in the mind and body these odd new aggregates. In his book Music and the Ineffable, the philosopher Vladimir JankÃ©lÃ©vitch wrote of how a musical work does not exist except in the time of its playing. Can one say the same about a work of performance? He further distinguished that one does not think about music as much as according to music. With that in mind, please click the link below to hear a sample of Lizâ€™s composition, from the second movement of Theyâ€™re Mending the Great Forest Highway.

Thanks, and see you soon.

MatthewÂ GoulishÂ co-foundedÂ Every house has a doorÂ with Lin Hixson in 2008. His books includeÂ 39 Microlectures â€“ in proximity of performanceÂ (Routledge, 2000),Â The Brightest Thing in the World â€“ 3 lectures from The Institute of FailureÂ (Green Lantern Press, 2012), andÂ Work from Memory: in response to In Search of Lost Time by Marcel Proust, a collaboration with the poet Dan Beachy-Quick (Ahsahta, 2012). He teaches writing at The School of the Art Institute of Chicago.