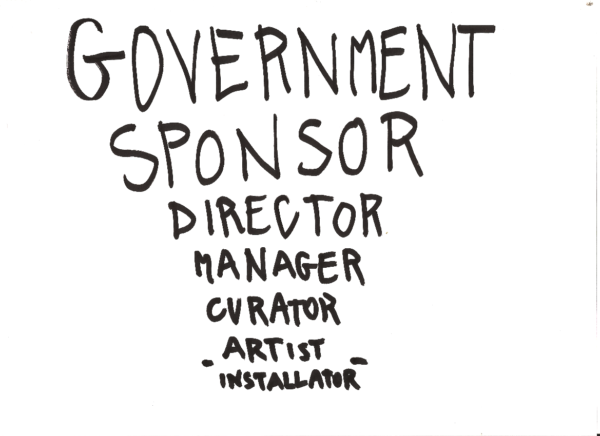 “Tumblr is a great way for people who don’t create content to share content thus lending their life some kind of creative import.â€ Â This is the somewhat omniscient Jayson Mussonâ€™s tweet from a couple of weeks ago.Â  The more I think about it â€“ and I have been thinking about it way too much â€“ the more I realize that heâ€™s probably right.Â  There are a lot of people on Tumblr and I am one of them.Â  And I cannot get enough. Â But you know what, I donâ€™t care if these people havenâ€™t created the content theyâ€™re posting, at least theyâ€™re posting content â€“ which, in of itself, is a creative act. Â And itâ€™s visual, and I personally am constantly learning from it. Â Itâ€™s a visual literacy of the highest import.

My own Tumblr, Installator, is a curated (for lack of a better term) blog of other peopleâ€™s content.Â  Â Â Installator (wrapit-tapeit-walkit-placeit) is essentially a compendium of art in a state of movement â€“ being installed, de-installed, moved, crated, knocked down, hung, lifted, cleaned, screwed together, and on and on.Â  Itâ€™s about art as an object, but decidedly not the object that most people understand it to be.Â  Not precious, or in some cases priceless, well-lit aesthetic nuggets that just seems to appear on walls, or pedestals, in fields, on buildings and above couches.Â  These are images of artworks that are not static. 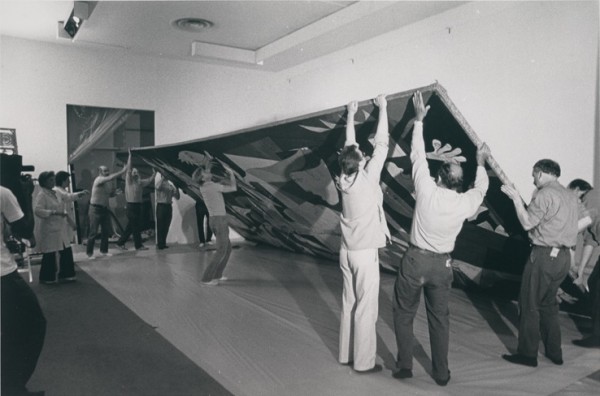 Sometimes I wonder if people who go to museums or galleries think these things just kind of magically appear overnight – like some sort of aesthetic fairy flitting down to delicately place a painting on a wall with their sparkly fairy-dusted level.Â  Well they donâ€™t, and there is a magical coterie of individuals who do make it happen: art handlers/preparators/riggers/etcetera.Â  I am not an art handler, though I have done my fair share of handling art (Iâ€™m also married to a former preparator).Â  It is with the utmost respect for these folks that I showcase them in the photos that make up Installator.Â  Other people are impressed too.Â  Of the many comments I do get on one photo or another â€“ a common one is some form or another of: â€œI want to do this for living!â€ 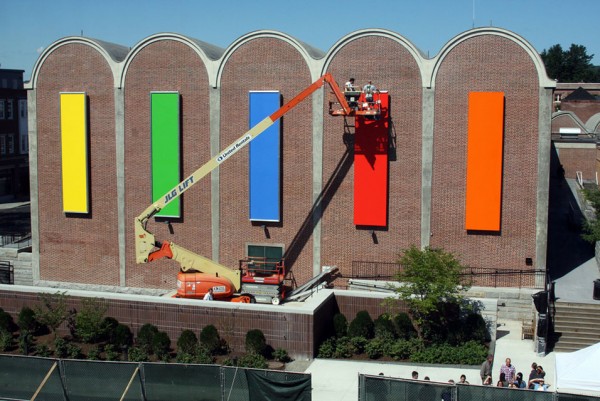 Looking for images can be a pain in the ass, but when I find a good one I get really excited.Â  I have a loose set of criteria that I stick to when finding them; ideally itâ€™s a large jpeg; includes an image of a person(s); is of an artwork or artist that I admire; is visually representative of the act of installing or de-installing and has to be stimulating to look at.Â  Funny pictures help, as do process-oriented sets of images.Â  I mostly start with a Google image search including an artistâ€™s name (or sometimes an artwork) and the word â€œinstallingâ€.Â  Another route I take is plundering the Facebook photo albums of museums.Â  I find that European museums do the best job of documenting their behind-the-scenes, but there are a few museums with their own oft-updated Tumblrs, blogs and websites (the Dallas Museum of Art, Contemporary Museum of Art, Houston and the Walker Art Center are tops.)

At this point it seems as though a lot of Museums are catching onto this peeking-behind-the-curtain-thrill.Â  Many of them are sharing much of the work that goes into setting up an exhibition, not only by posting more and more images for the public, but also using it as a form of education about the lives of artworks.Â  This can only be healthy.Â  It humanizes the pricelessness that these objects are assumed to have once they enter the institution.Â  It also showcases the care for these objects from a preservation standpoint.Â  I thought this quote from the Chrysler Museum of Art was interesting, even though the images they did post were some of the most beautiful Iâ€™ve come across: “We generally do not discuss anything related to the movement of art. There are lots of reasons for this, ranging from the obvious (security) to the obscure (proper protocols and handling).Â  â€¦. We rarely if ever actually photograph art being moved. This is [a] field where mistakes are not an option, and a great work of art being damaged because somebody tripped over a photographer just canâ€™t happen.â€ 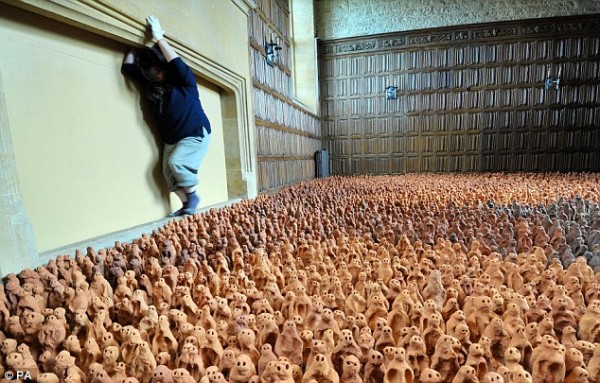 There is also what I cannot find. Â I have a mental list of artists whose work I would very much like to see installed.Â  There are also museums that simply arenâ€™t interested in showing how work travels from the bowels of their storage to the walls of their galleries.Â  Outside of Instagram, commercial galleries very rarely show images of their artists work being installed (though Salon94 has a great blog that features this).Â  Along the same lines, itâ€™s often difficult to find images of art fairs being loaded in.Â  Artists who have their own websites also rarely show images of their work from this viewpoint (Sterling Ruby and Martin Eder (?) are a couple of exceptions).Â  Holy Grail images would include almost anything pre-1980, better yet pre-1950.Â  Â The Smithsonianâ€™s Archives of American Art (watermarks excluded) is by far one of the best resources Iâ€™ve found.Â  As far as mediums go, who knew it was so hard to find images of drawings and photographs being installed? 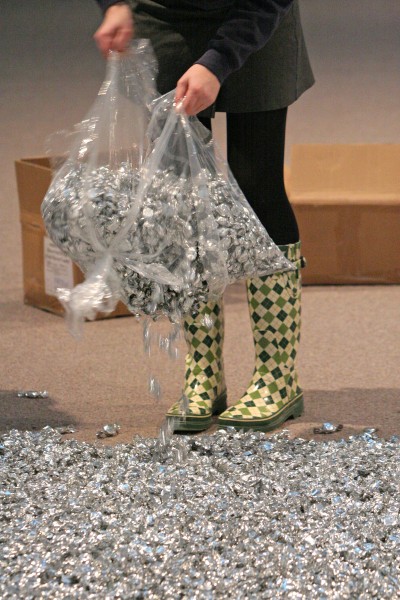 A short wish list, in case anyone was inclined to do some of their own digging and submit: Morris Louis (a good one, though this one is pretty good), Allan McCollum, Eve Hesse, Cady Noland and On Kawara. 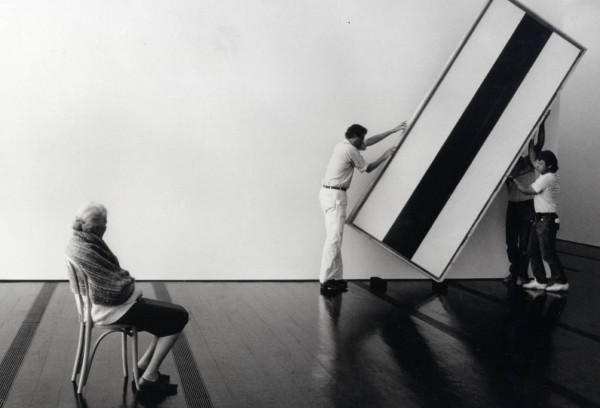 Whatâ€™s next? I thought an old fashion artbook might be a good way to harness a lot of whatâ€™s happening on the Installator tumblr.Â  There is more to mine here: from the relational aesthetics of it all to the art historical precedents of installing art. Â However, after looking into it and making a couple of inquiries, I realized that it would never happen.Â  I donâ€™t own these images and I certainly wouldnâ€™t want to deal with the red tape (from artist to gallery to museum) about ownership and rights.Â  Nonetheless, I do worry that with the fleeting nature of screen-scrolling, people arenâ€™t really looking.Â  Good old fashion page-turning sounds nice to me – maybe one of these days.Â  For now, Iâ€™ll still be looking for content and posting it for my 137,507 â€œfollowersâ€.

Bio: Britton Bertran ran 40000 from 2005 to 2008. He currently is an Instructor at SAIC in the Arts Administration and Policy department and the Educational Programs Manager at Urban Gateways. An occasional guest-curator, he has organized exhibitions for the Hyde Park Art Center, the Loyola Museum of Art and several galleries. You can find him trying to be less cranky about the art world on twitter @br_tton.Â  Stay tuned for a couple more guest posts where Britton will be waxing poetic on whatâ€™s wrong with the Chicago art world circa 2013, while thinking out loud about how to fix it and another post about looking forward to 2014 (and maybe a top 10 list of sorts too.)