Cube of Forest on the Golden Gate by Superstudio 1970â€“7

In an exhibition last year at the Geffen Contemporary in Los Angeles entitled Ends of the Earth: Land Art to 1974 co-curators Phillip Kaiser and Miwon Kwon attempted to create the most comprehensive assessment and categorization Land Art to date. This exhibition was lauded for not merely being comprehensive, but also for challenging the American-centric notions that usually define this movement, thus extending the conversation into a more international discourse. Thinking about this exhibition, and the attempts by the curators to reintroduce site-specific practices into a contemporary conversation has made me question the role of site and of location within digitally produced works.

Kwon herself offers many perspectives on the shifting state of site-specific work in her One Place After Another: Site-Specific Art and Locational Identity. The book examines the emergence of site-specific artworks as a direct response to the stale/domestic/white cube settings that more commonly permeate contemporary art at the time. She notably points to the shift of site-specificity from wilderness sites back into the gallery due to the convenience of re-fabrication processes. This practice is then eventually supplanted by an adoption of institutional critique performance by museums as a way of continuing to support site-specificity work. However, this gesture of support still truncates this work within the confines walls of the institution. As a result of the increased modularity and/or insularity of many site-specific works â€“ an effort to make these pieces more capable of traveling to multiple institutions â€“ Kwon argues that the very nature of a site-specific practice is more mobile as of late.Â  As a result:

“the specificity of the site in terms of time and space is rendered irrelevant, making it all the easier for autonomy to be smuggled back into the art workâ€¦ The artwork is newly objectified (and commodified) and site specificity is redescribed as the personal aesthetic choice of an artistâ€™s stylistic preference rather than a structural reorganization of aesthetic experienceâ€¦. In this way, site-specific art comes to represent criticality rather than performing it.”

This trajectory not only asks artists to take hold of the performative role of a location based work (as famously done by Andrea Fraser) but it also asks artists to take the materiality of mobility as the primary location for criticism. If a work of location-based art is freed from needing specific time and space to discuss locational identity, then how might this serve an artist already working with a medium that embraces mobility? If one were to embrace the spatial and temporal flexibility of location then this site can become decentralized or abstracted in order to speak to the underlying cultural significance of a specific place.

Itâ€™s important to note here the importance difference in the two types of locations that artists might engage: space and place. In space, artists are concerned with geography, geometry, and dimensions of distance or volume; however, in place, artists are investigating the culture, history, identity, and politics of a location. This differentiation is important since space is the only location of the two that requires (or at least asks) the artist to be physically present with the site. (Various Marina Abramovic puns can be inserted here).

With place, that physicality is not required. In fact, place does not inherently require any physical manifestation whatsoever. Place can exist in memory, in writing, in oration, or in any variable/ephemeral media. In this way, place is much more akin to Conceptual art of the 1970s, where the idea of a work takes precedence, and the execution of object-making for the purposes of containing that idea are secondary (or at least that is the hope).Â  If place can then exist within non-physical environments, then it is a ripe location for digital artists to inhabit and work within.

I feel as though there are already artists dealing with space as a decentralized phenomenon. For instance, in his Tantamount Series, JK Keller flattens various mountain peaks into a unified horizon line. This gesture then visually and metaphorically flattens the rooftops of the world into one single homogenous space. Regardless of Kellerâ€™s visually inventive gesture, this work does not necessarily take into account the actual placial relationships these locations might possibly have with one another. The decentrality of these mountaintops marks these locations more as a type of â€œany-space-whateverâ€ then it does a place with a specific history/identity. This is not to fault Keller by any means, but his work serves as fitting evidence of a continued trepidation to address place within the digital arts.

Some artists seem to be slowly approaching place as it relates to personal history, however. Nicolas Sassoon has made a couple of works â€“ notably Fidji â€“ that address the architectural history of locations from his childhood and how these sites have influenced his amazingly consistent style. Works like Legend by Timur Si-Qin, on the other hand, addresses place not through personal narrative, but through the context of the gallery in which he is shown/invited. The place in this piece (although situated in a specific space) involves the family of one of the gallerists. Si-Qin asks the gallerist to engage with her fatherâ€™s interest in medieval reenactment through the devices of contemporary warfare. This process then creates a fictional, decentralized place that involves a specific family history and cultural lineage. The catalyst for creating place in this work occurs in the â€œsimulated anachronistic battle [that] double[s] as the act of artistic production.â€ The physical space of the gallery is then made somewhat irrelevant, and in turn creates a â€œcontext-specific project.â€ (Above quotes taken from the press release of the exhibition at Fluxia in Italy).

Si-Qin combats falling into the trappings of a more typical context-driven methodology that takes cues from the spatial concerns presented by a physical gallery or institution. This more standard way of working, however, is what most artists I know would identify as site-specific work (or what I too have identified in the past for invitational projects). It goes something like: a gallery asks to do a show with an artist, and the artist seeks to make a new body of work in response to such a request. This process is still grounded in issues of space, and rarely addresses the place of the gallery or site. Â As a result of this trend the gallery itself becomes a no-place, and merely serves as a spatial vessel for transporting (or manifesting) the consumable goods that Kwon had initially argued against. However, because digital art does not require spatial presentation of a work (although some would argue this abandonment is naÃ¯ve), artists in this medium should take the opportunity to create work that investigates the nuances of place. 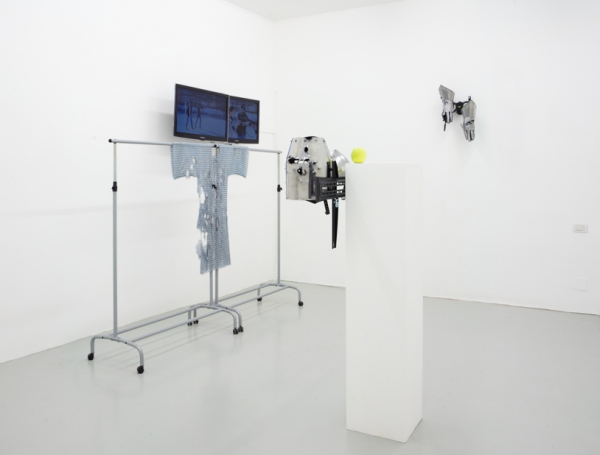 I could be asking for too much, since the lure and attraction of showing in a gallery poses artists with an opportunity to sell work or to recoup production/education costs. I suppose itâ€™s more than a lure, itâ€™s a real/physical possibility that digital artists are rarely afforded. But in my mind artists should already be working on projects or ideas regardless of representation and/or exhibition opportunities. Due to the accessibility â€“ and I use that term lightly â€“ of the net, the potential for emphasizing placial concerns should be unavoidable. This is particularly the case since the space of the Internet is much more decentralized.Â  So why is there still reservations in discussing the potential of a decentralized place?

It might be that the conceptual project of a decentralized place is much more of a challenge to those already comfortable with the idea of working within decentralized space. How does one talk about the specifics of a culture or history in such a way that is not predicated on a particular geography? One recent project that I feel is attempting to approach this conundrum is a kickstarter initiative by Lance Wakeling entitled Field Visits for Bradley Manning. In his description of the project Wakeling outlines a particular methodology for tackling the task of decentralized place through looking at multiple spaces:

â€œdespite the title, Field Visits is not a straight-up documentary about Bradley Manning. Instead, the video explores the peripheral histories and landscapes of the surrounding areas. The case of Manning and the fight for open information become one tile in the larger mosaic of an internet impatient to assume the world.â€

By stitching together histories, sites, and spaces, Wakeling is attempting to create a place â€“ an imagined and decentralized location â€“ to discuss the implications of free information in a heavily surveiled society. In doing so, the space of these locations â€“ Kuwait, Virginia, Kansas, and Maryland â€“ becomes subservient to the place in which these locations come to represent. Thus the place of this work is situated in a decentralized location.

In looking back at the strategies of Land Artists included in Kwonâ€™s exhibition one can observe how desire to relocate art outside of the minimalist influenced â€œneutralâ€ interiors of the gallery was an act of rebellion against the sterility of that aesthetic. The organic forms of Land Art, in and of themselves, serve as an oppositional stance against the geometric rigidity and spatial obsessiveness of minimalism. Artists working with digital technology have certainly taken it upon themselves to investigate how the ephemeral material of their medium challenges traditional notions of space. However, artists of this ilk must also take advantage of that ephemeral materiality as a way to challenge traditional notions of place. In this way, I wonder how the potential for a new form of decentralized or actively mobile site-specificity might in turn serve as a reaction against the rapid commercialization and institutionalization of art online.