Dominic from Luton goes to Reykjavik 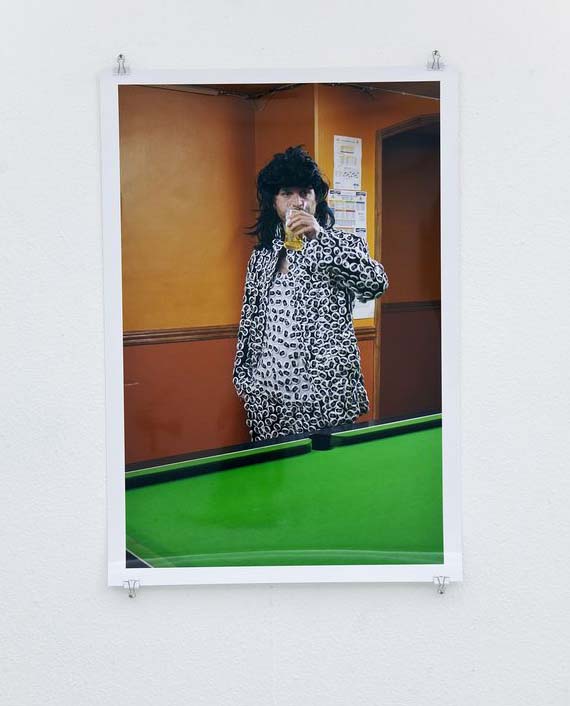 Dominic from Luton as Paul Young. All installation photos by Ingvar Hogni Ragnarsson

It is more than 1,000 miles from Luton, England, to Reykjavik, Iceland. But Dominic from the UK town appears to love a good caper. Why else would he put together a group show on very little money in one of the most far flung and expensive cities in Europe?

â€œIt was done on a wing and a prayer,â€ he tells me on the phone from his Luton studio. â€œThe art was just really, really ambitious considering we didnâ€™t have much money to play with. Itâ€™s amazing what you can do with a cardboard tube and a delivery van.â€

Five artists took part. And the show has just run for a month at gallery Kling & Bang. Along with Dominic, the full bill included Gavin Turk, Mark Titchner, Laura White and Peter Lamb. The show went by the name London Utd. â€œIt’s kind of doing what it says on the tin,â€ says Dominic, whose eponymous town is just a twenty minute train ride from the UK capital.

Not that he is the first to cross the Atlantic to the artist led space. He tells me that Paul McCarthy and Jason Rhoades have also shown at the dynamic and co-operative venue. And Dominic takes the opportunity to recount the tale of Kling & Bangâ€™s legendary appearance at Frieze Art Fair. 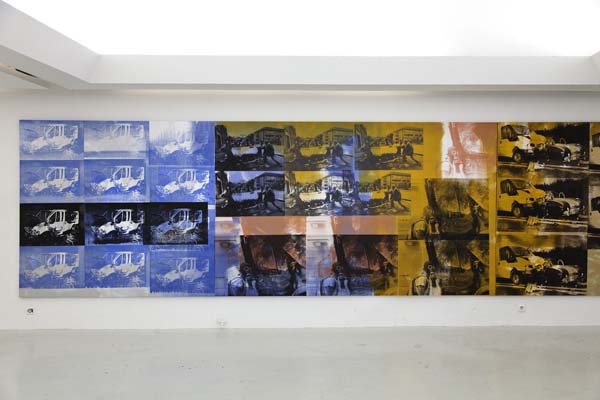 â€œThey did a Frieze Project in London in 2008 called Sirkus. Itâ€™s an incredible story,â€ says the artist, telling me that Sirkus was the name of a Reykyavik bar: â€œThis place was the hub, the heartbeat of the arts communityâ€. But after nine years of business, Sirkus closed down, leaving Kling & Bang free to turn the faÃ§ade and fixtures into a temporary installation for the art fair.

Dominic warms to his tale: â€œThey arrived at Heathrow in October 2008 and basically all their credit cards had been stopped because the [Icelandic] crash had suddenly happened overnight and so this bar, which was a mirror of good times and place to meet, became that again in London.â€ Word soon went round about the penniless Icelanders with the reconstructed bar.

Things are a bit better in Reykjavik now and in its way London Utd has become another bridge between the art scenes in both cities. Mark Titchnerâ€™s piece was a piece of text in Icelandic, which read The World Isnâ€™t Working. (Perhaps the UK crash is yet to come.)

Gavin Turk meanwhile offered a twelve and a half metre diptych inspired by Andy Warholâ€™s Death and Disaster series and featuring the four wheeled emblem of working class Britain the Ford Transit. Laura White produced no less than 54 drawings of photos of sculptures which she herself had made. And Peter Lamb translated the shifting detritus on his studio floor into two large abstract canvases.

Asked about one of his own works in the show, Dominic is ready with another yarn. â€œThat photo was done as a tribute to Paul Young,â€ he tells me. Like the artist, the singer came from Luton. â€œHe used to work at Vauxhall [car plant] in the early 80s and he told someone I know in the canteen once that he was going to be a global pop star and then literally 18 months later he was, with Everytime You Go Away.â€

The track resonates with many a Lutonian and inspired a Dominic from Luton performance at an event called CafÃ© Almanac organised by Bedford Creative Arts. This involved sourcing an 80s wig from Luton Indoor Market, posing for a portrait artist in the shopping centre and getting 5,000 badges made to cover a cheap suit. â€œI just stood up in front of about 50 people in this Working Menâ€™s Club on a Saturday afternoon and sung my heart out,â€ recalls the artist. 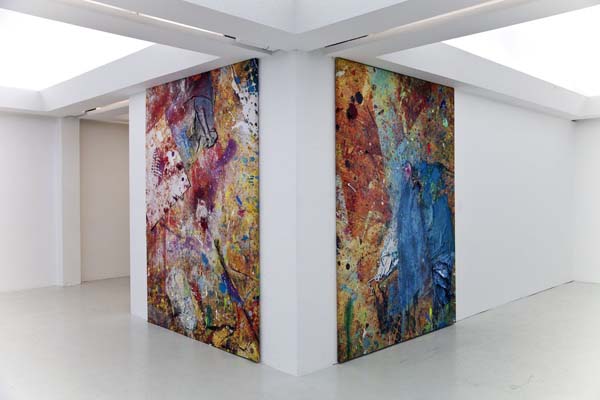 This took place under a net filled with 200 balloons in the colours of the local soccer team, intended for release in the final verse. However â€œThe net got caught in all of my badges so I had 200 balloons attached to me and I panicked and – it wasn’t scripted at all – I basically ended up having a fight with these balloons and stamping on them and stuff and it brought the house down actually.â€

But despite the hazardous stagecraft, Dominicâ€™s â€œbiggest challengeâ€ is a self-proclaimed inability to sing. So it comes as no surprise that the artist thinks most performance art is too earnest. â€œPeople would argue with this, but I think there’s a duty to entertain,â€ he says, â€œThat’s just my take on it. That’s my little mantra.â€ Even the anecdotes which relate to each of his gigs are compelling experiences.

As a final aside, itâ€™s worth pointing out that the artist formerly known as Dominic Allan comes from one of the most derided towns in the UK. His â€œfrom Lutonâ€ tag is a sticky piece of cultural baggage. Dominic tells me that the name just came about through being easy to remember when he ordered materials.

Now, he claims, â€œItâ€™s just a very glorious vehicle for the idea of the underdog and also to shove it back in peopleâ€™s faces now because Lutonâ€™s one of those towns which people laugh about . . . The more I go on, the more I realise that it is serious, and it is seriousâ€.

So thatâ€™s Dominic, from Luton, easy to laugh with, hard to laugh at. Prepare to be entertained if he ever comes to your town.

Mark Sheerin is an art writer from Brighton, UK. He can also be found on Culture24, Hyperallergic, Frame & Reference and his own blog criticismism.com