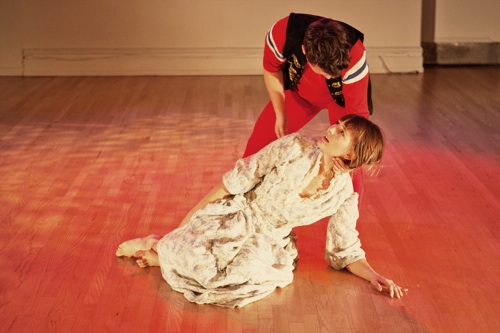 Pyle as the princess and Jules Skloot as the tranimal in The Firebird. Photo by Christy Pessagno

â€œO Rosalind, these trees shall be my books. /Â And in their barks my thought Iâ€™ll character, /Â That every eye in which this forest looks /Â Shall see thy virtue witnessâ€™d everywhere. /Â Run, run, Orlando! Carve on every tree /Â The fair, the chaste, and unexpressive sheâ€ Â (As You Like It,Â Act III, scene ii, l. 1-10).

This week I’m posting something quick and slight â€” more of a go-to, actually. Because I came across a great interview on the Movement Research blog that Marissa Perel conducted withÂ Katy Pyle about her Ballez performance, The Firebird. “Itâ€™s a redefined, more theatrical, and queered ballet. It takes a lot from ballet vocabulary, but itâ€™s exploring new gender roles, new gender identities, and features queer women, lesbians, and trans people. Itâ€™s a Ballez” (Movement Research). Their conversation inspired me for so many reasons â€” on the one hand it sounds like a performative embodiment of hybridity from the way the piece exemplifies gender fluidity, to the way it borrows from multiple styles and approaches to dance (and particularly ballet), to the fact that there is a “transanimal” (what a lovely creature!). But then too, I have been extending an essay about artist residencies in the woods and how they are contingent to the city. In Pyle’s piece, her Princess protagonist “is really chasing the transanimal, which we donâ€™t necessarily associate with femininity and masculinity. And, sheâ€™s a lesbian princess. Sheâ€™s recently divorced, you know. Sheâ€™s starting out on a journey away from this life of privilege and heteronormative culture to find what she really wants and what would really feel right for her. So, she goes into the woods [laughs]. Thatâ€™s where you go to figure things out” (MR).Â From my experience I visiting ACRE last summer, I’ve been thinking a lot about of the “woods” and what their role is in the creative process. It brings up all these old high school memories about our day-long slog of an annual Shakespeare Festival (every English class in the school acted out a scene from Shakespeare; it was always part pain and part pleasure and very certainly a suspension of reality, given that the whole school spent six hours together in the auditorium). Woods and islands were frequently reoccurring settings that always offered insight and transformation because they provided remote locations that resisted otherwise predominant moires. 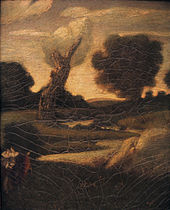 The setting of action inÂ As You Like ItÂ takes place in the Forest of Arden. While the characters are still subject to the laws and politics of their court, (for instance, Rosalind has fled for political reasons), the forest enables a suspension of civilized reality. Once inside the forest, characters can reinvent themselves: women can be men and fools can be wise. Rosalind transforms herself into a man creating an overarching and poetic tensionÂ Â around gender relations. Hierarchical power is unsettled and reexamined, as is the charactersâ€™ relationship to their environment. Trees become books, becoming directly accessible. The context of the forest highlights a separate kind of truth which is eventually brought back to the city and grafted onto urban society. It is as though the forest is a dream state, wherein characters engage and resolve their problems intuitively, in ways that were not possible in the rational, domesticated world. The literal Forest of Arden in England, not far from Shakespeare’s birth place, lies in the center of England. Curiously, no Roman road ever passed through its wood. Rather roads were built around its bounds. Even in geographic reality the forest seems to maintain a space beyond rational enterprise, an undomesticated plot of land that resists easy passage, while neverthelessÂ  being contextualized (or flanked) by the very politics it suspends. There is a constant relationship between the conscious and the subconscious, the wilds of the wood and the rubric of inherited society.