We received an email from Carlie Dennis, the exhibitions assistant at MOCAD, containing a few corrections to the piece below concerning the number of visual artists represented in the Art X exhibition at MOCAD. The correct numbers have been noted in bold in the piece, and Dennis’ letter to Bad at Sports containing further clarifying details, etc.Â  follows the post in an effort to ensure the corrections are clear.Â  In addition, please note the following exhibition sponsorship information provided to us by MOCAD: The Art X Detroit: Kresge Arts Experience is sponsored by The Kresge Foundation, in partnership with the College for Creative Studies, Artserve Michigan, the University Cultural Center Association (UCCA) and the Museum of Contemporary Art Detroit (MOCAD).

It was in 1909 that Marienetti first recounts his fated car crash in the pages of Le Figero. He describes an evening where late-night mythologizing veers poetically into an early morning drive. Three â€œsnorting machinesâ€ are caressed and brought to life, and he writes, â€œa great sweep of madness brought us sharply back to ourselves and drove us through the streets, steep and deep, like dried up torrents.â€ Torrents, indeed. Of course we know how this ends: one shiny, red roadster meets two cyclists, (â€œlike two persuasive but contradictory argumentsâ€), and crashes grill-first into a gutter filled with the muck of industrial runoff. Overcome by his encounter with the speed and power of mechanical ingenuity, Marienetti emerges from the factory sludge a Futuristâ€”belligerently positioned towards a new era, first will and testament in hand.

Coincidentally, it was this same year that Henry Fordâ€™s Model T made its debut at the Detroit Auto Show, and thusly set into motion the chain of events that would result in the creation of Motor Cityâ€”a figment of Detroitâ€™s identity that persists over a century later. Artists in Detroit are consumed by the context of the post-industrial, post-urban cityscape. Like Marienetti, they are influenced by the concrete motorways and roaring engines that have shaped the physical space, economy, and consciousness of the city for decades. Henry Ford and his Model T

Art X Detroit, an exhibition featuring 17 of the 36 Kresge Fellowship recipients, opened April 6 at the Museum of Contemporary Art Detroit. Wire Car Cruse, an event and subsequent video work, (titled â€œa dance for Diego,â€) by Chido Johnson, deliberately mines the history and present of car culture in Detroit. The Woodward Dream Cruise, now in its 16th year, is an annual event, where more than 40,000 classic cars and roughly 1.5-million spectators assemble along the 16-mile stretch of Woodward Avenue to observe and tailgate, while restored antiques and custom muscle cars takeover the arterial. I will say, that from someone who is admittedly more of a public transportation enthusiast, this weekend-long spectacle does not disappoint. Beer, barbeque, and tricked-out mechanics?! Um, yes, please.

Johnson uses the performance of Dream Cruise as the foundation for his own event, which combines the ritual of the Detroit car cruise with the practice of creating wire cars, a pastime from Johnsonâ€™s childhood in Zambia and Zimbabwe. The performance articulates a hybrid cultural activity, which represents the artistâ€™s own negations with subjectivity living between two cultures. Moreover, Johnsonâ€™s event cultivated a community of wire car enthusiasts, and in so doing, opened up this history of Detroiters and their cars to new audiences who may have been previously excluded from this specific cultural phenomenon.

The video documenting Wire Car Cruise is juxtaposed with a sculpture entitled, â€œme me me,â€ which is a self-portrait of the artist as a carved African statuette installed on a deconstructed cardboard box on the gallery floor. This work further accentuates the search for a sense of identity between cultural spacesâ€”a literal unpacking of the artist as subject. What interests me most about the video, statuette, and their installation at floor level, is their child-scale. The overall impression of the work is a sense of playfulness that Johnson associates with the practice of making. The video work, â€œa dance for Diego,â€ takes as its title a sentiment from Diego Rivera who said that the city of Detroit is of makers and dreamers. Johnsonâ€™s work at its essence is about making, and reinvigorating this type of creative industry with a sense of joy and wonder. 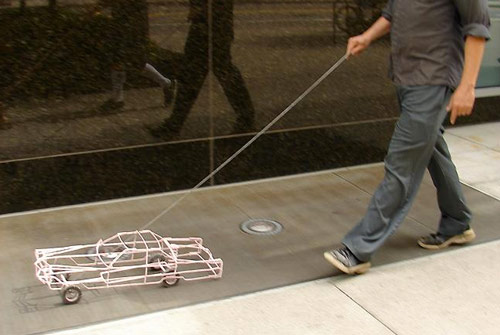 Abigail Anne Newboldâ€™s work, â€œHome Maker,â€ addresses the urban frontier as an expanse to be explored via bicycle and wagon. In the tradition of the pioneer settlement, the Airstream mobile trailer, and the popup house, this project is comprised of an intricate toolkit with which even the least adept outdoorsman can create a makeshift home. The foundation of the piece is a custom-made bicycle and covered wagon functioning like a rickshaw trailing behind. The accompanying toolkit is exhibited in an arrangement both in the wagon and on a gallery wall, which operates like a hybrid one-bike garage meets REI store display. The literal use of the tools is ambiguous; however, the rugged, weather-ready materials in hazard yellow and orange renders the objects explicitly for outdoor survival.

Perhaps this work is a statement on the changing nature of settlement and domesticity given the shifting housing market, or maybe Newbold is supplying tools, (such as a three-fingered pot holder, a bouquet of tent stakes, and wilted bow and quiver of arrows), to the urban ethnographer. Regardless, â€œHome Makerâ€ is a response to a city in transition, where the untamed urban prairie is an opportunity to develop and implement re-imagined infrastructures for living for the coming century.

Photographer Corine Vermeulen is the spiritual offspring of Dorthea Lange and Buckminster Fuller. Her series, â€œYour Town Tomorrow, Detroit 2001-2011,â€ explores the identity of place through portraiture of the everyday Detroiter. Vermeulenâ€™s imagery, through documentary, ventures beyond the sensation-hungry media snapshot of blighted landscape and broken home. In fact, Detroit as an urban, city-subject is barely recognizable. Her subjects are framed by a landscape that has an immediate, visual association with the southern rural rather than the rustbelt. Families and haphazard communities are depicted in the liminal spaces of Detroitâ€”in front of ailing fences, amidst the tall grasses of overgrown urban lots, and on rebuilt bicycles. It is from this ambiguity of place that Vermeulen achieves the futuristic sensibility referenced in the title of the series. 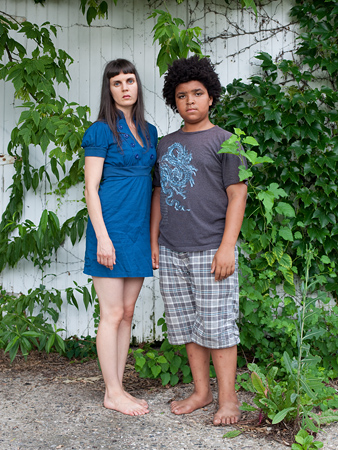 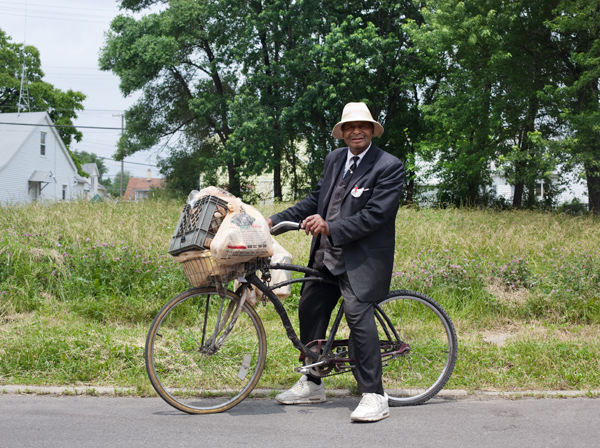 The artists refers to her portrait series as â€œmemories of the future.â€ Like the work of Newbold, Vermeulen portrays a city in transitionâ€”its citizens picking up the broken detritus left in the wake of post-industrialzation to re-cultivate land, rebuild homes, and re-imagine communities. Her portraits contain the â€œnew topographies of urban life,â€ and function as an alter-narration of what urban space can be, and indeed, may be, in the uncertain future of Detroit.

Sarah Margolis-Pineo is a curator and writer. She is currently the Jeanne and Ralph Graham Collections Fellow at the Cranbrook Art Museum.

There are a few clarifications that I would like to highlight regarding the Art X Detroit exhibition that is currently on view at MOCAD.Â  First, there are a total of 18 Visual Arts Fellows, 19 if one includes Eminent Artist award recipient Charles McGee.Â  Neither Charles McGee, nor Tyree Guyton (one of the 18 Visual Arts Fellows) have work in the exhibition on view at MOCAD, as they each have public installations elsewhere in the Midtown neighborhood.Â  Additionally, it is misleading to say that the exhibition features 19 of the 36 Fellowship recipients, as the other Fellows are in the Literary and Performing arts fields, and are therefore not included in the exhibition but are included in the week’s series of public programs and events.Â  This statement makes it appear as if the exhibition was curated, when in fact it is an artist-driven showcase and includes all of the Visual Arts Fellows (please click here to read a lengthier description of the context of the exhibition: http://mocadetroit.org/).Â  Finally, while MOCAD is the venue for this showcase, it is important that proper credit is given to those who produced, organized and funded the exhibition: The Art X Detroit: Kresge Arts Experience is sponsored by The Kresge Foundation, in partnership with the College for Creative Studies, Artserve Michigan, the University Cultural Center Association (UCCA) and the Museum of Contemporary Art Detroit (MOCAD).”