The Public is the Teacher: An interview with Justin Cabrillos

In this guest post, Marissa Perel talks with artist Justin Cabrillos about his studio practice and his recent performance of Following Dance at the MCA Chicago. Cabrillos will also be performing at: remixed/reimagined 2011 at the MCA Chicago Performance Benefit on Thursday, June 23, 2011, at 6 pm. 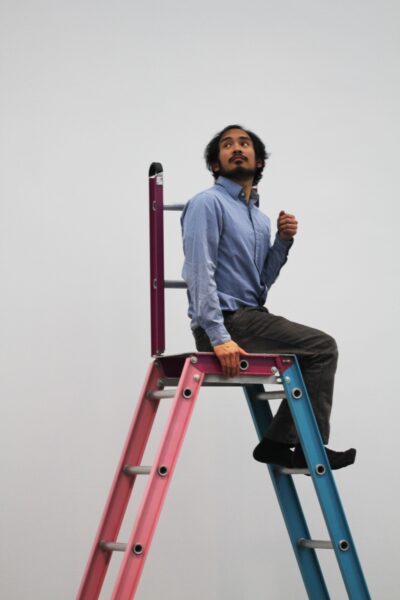 Marissa Perel: Tell me about your process for the Following Dance performance you did at the MCA as part of the Without You Iâ€™m Nothing: Interactions at the MCA.

Justin Cabrillos: I wanted to make a response to Vito Acconci because my work is largely inspired by his endurance pieces in the 1960-70â€™s. For this performance, I studied his Following Piece, where he followed around strangers in the city for minutes or days until they disappeared from his view. I combined techniques for following museum visitors by imitating their movements while I performed on his sculpture, Bridge Chairs for Sex and Gender.

I considered Acconciâ€™s movements retroactively as a form of dance in Following Dance. Itâ€™s a triangulation of his voyeurism, how he moves his body motivated by that voyeurism, and the bodies of the people who lead him through space. I became interested in a public choreography.

MP: How did you take this public performance art piece and make into a dance?

JC: I started observing people in the museum in October before my performance in January. Iâ€™d go into the MCA and watch the public in museum mode. I studied how people hold themselves when they go to see art down to how they hold their weight or shift their gaze. It was a kind of movement analysis that informed how I would build the dance. I sought to embody how people interacted with the art. Or more to embody the relationship between the viewer, the objects and the space between them.

Because of the nature of the work in the Without You Iâ€™m Nothing Exhibition, viewers are moving more than they normally would, and I saw that as an opportunity for movement analysis. I also paid attention to people who didnâ€™t choose to interact with the work, their stillness became a source of choreography for me. 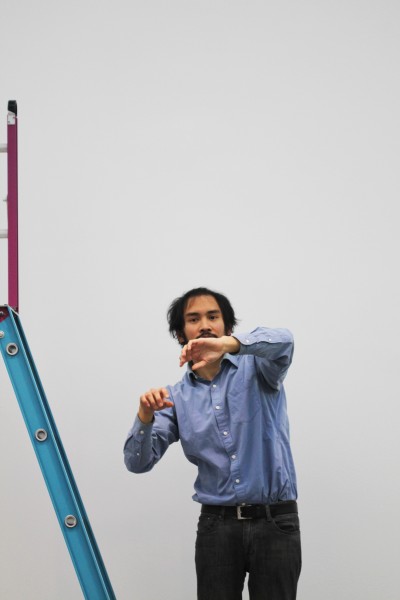 Once I was performing, the ladders of the Bridge Chair enabled me to have a birdâ€™s-eye-view of what people were doing. I could look through the Andrea Zittel piece, A-Z Cellular Compartment Units and see kids taking off their shoes and crawling around, so Iâ€™d take off my shoes and crawl around. The ladder really facilitated the voyeurism for the piece.

MP: Vito would love that!

JC: I know! I developed a system to call attention more to the viewers than to myself. If someone was directly looking at me, I wouldnâ€™t follow that person, but the person could see who I was following. Itâ€™s like when youâ€™re in a dance class, watching the teacherâ€™s movements and trying to follow as best you can. In this case, the public is the teacher. The goal is not so much to parody to make fun of the viewer, but to reveal something about the viewers to one another, and to create a consciousness of the relationship between the viewer and the space of the museum. 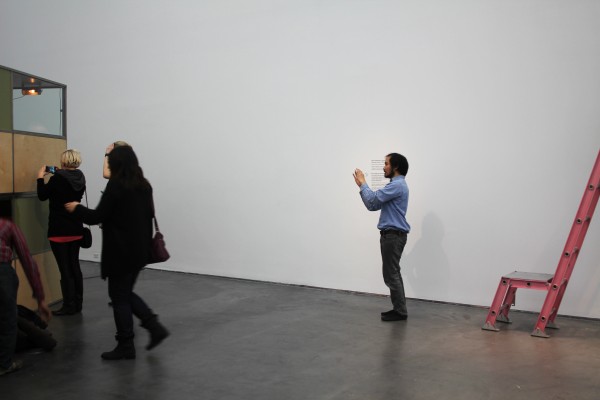 MP: How is this experience different than your experience of stage-based performance?

JC: I had to think of a different way to structure the performance. Because it wasnâ€™t about everyone being part of my time, but about the time people were spending in the exhibition. It was like a game where I had to be hyper observant of the audience. On stage youâ€™re rarely aware of audience members as individuals. In this piece, I had to anticipate how people would respond to my actions. It required me to simultaneously observe and perform the audience. That was a lot of information for me to contain in my body! I felt like I was possessed, inhabited by the other bodies in the room.

MP: I find that to be a compelling aspect of your work in general, how you embody your research, whether itâ€™s historical data, responses to sites or in this case, how you are embodying a relationship between art and the audience. It seems like you have to empty yourself of your own contents in order to become a vessel for the subjects of your performances. How do you make space for this, literally in your body and conceptually?

JC: When I was on a residency with Every House Has A Door, I had the opportunity to meet Netherlands-based choreographer, Meg Stuart. Once in a critique she said, â€œThe body is not yours.â€ I think itâ€™s important to let go of your body and see what happens. This can be liberating because you can see what your body is capable of.

By the end of my performances at the MCA, I could pan across the audience and string 6 different movement combinations together from the people I observed because I was totally invested in their vocabulary. My interests are now much more activated around the space of what Iâ€™m seeing in relationship to where I am in the moment.

MP: How long were you performing Following Dance?

JC: For two hours a day over the course of 6 days. I also performed for First Friday, artsmart [an event sponsored by the MCAâ€™s Womenâ€™s Board], and I will be performing it again for the MCA benefit.

MP: This is definitely enough experience for you to perfect the art of â€œobservational vocabulary,â€ how do you keep it fresh?

JC: A lot of people talk about the conceptualism behind performance art of the 1970â€™s, but what I appreciate is the childlike wonder about it. One thing thatâ€™s different about this piece from my other work is that itâ€™s light. Thereâ€™s an almost childlike sense of humor about it.

During the First Friday show, I noticed a man texting on his cell phone, so I started to act like I was texting . Everyone that was watching us noticed what I did and started laughing. Another day, I noticed a woman lying inside the Convertible Clam sculpture [also made by Acconci]. I laid down in the other half of the shell and slowly copied her movements. It took her a long time to figure out what I was doing.

People seem to be of two minds when they figure me out, they either revel in the attention and play with it, or they run away. Kids are endlessly stimulating because they are always moving and they are also willing to play the game.

MP: What is it like for you to leave that way of performing and return to your studio?

JC: Even when I have physically left the space of the MCA, Iâ€™m not sure if my experience leaves me -itâ€™s never completely over. As artists, weâ€™re constantly living with the material of our work. I sleep and eat my material, and I try to pay attention to how my daily life is affected by the focus of my work, how my intention is shaped or directed by my interests. I work very hard to make ephemeral art, and I often ask why I am doing this. I donâ€™t have an answer,but I think the intimacy that I get to share with the audience, based on my intimacy with the material is one of the reasons I make ephemeral art. So, it’s about sharing and extending that intimacy with the audience.

For more information on Justin Cabrillos, visit his website here.