Once a resident of Chicago, Stephen Lapthisophon has since moved to Texas where he continues to write and make work while teaching at the University of Texas at Arlington. His ties to Chicago remain strong–what is most recently evidenced by his exhibit, The Construction of a National Identity at the Hyde Park Art Center. Running concurrently in Dallas, Stephen exhibited a second body of work, Spelling Lesson, at Conduit Gallery. In both exhibits he investigates the source and strategies of identity, integrating text and found materials. Recently I had a chance to ask him some questions about his work–Devin, Stephen and I have been working together over the last several months compiling a series of Stephen’s essays for The Green Lantern Press. In the midst of that process, I did not steal an opportunity to ask him about his visual work–what continues to play such a prominent role in his life. The more I learned about his practice, scouring through older publications, (Whitewalls published Hotel Terminus in 1999, as well as an artist catalogue, Writing Art Cinema 1977-2007 ) the more I began to wonder how he negotiates his own identity as an artist, particularly when his work seems so porous. It’s a strange idea, I’ll admit, to think of an art practice as being porous. What I mean is that Stephen seems to pass through accumulations of objects and ideas, undeterred by the cultural status of those materials (whether based in popular culture, day-to-day banalities or philosophy). He collects certain elements, one-liners and imagery, in order to then recompile those remnants through his own lens. Throughout everything he maintains a steady, personable voice. His work is warm, messy, I’d even say generous in its accessibility and boasts a consistent character–which of course points back to identity.

Caroline Picard: At your Conduit Gallery show, “Spelling Lessons” you address the question of a “signature.” As I understand it, you employ a variety of mediums, as well as text, to undermine/explore the question of a concise artistic identity. Can you talk a little bit about that? And maybe what you think a signature represents? (I’m also interested in this because of your regular incorporation of text, which seems to become it’s own kind of signature…

First of all, I have this difficult, hard to spell (and hard to pronounce) last name. So names have been on my mind for a whileâ€”the way that names are not really words but instead serve as markers of a sort. I am interested in the way we mark ourselves, mark our place and mark our moment. I am also interested in drawing. And for me writing is closer to the act of drawing than it is to Painting which carries with it a number of assumptions and heavy background. Drawing is mark making, notation, surface and hand.

Also, as we move away from the hand we move away from a different kind of object. Picture making, works of art are no longer â€œsignedâ€ in the same way as they were in the past. Yet artists persist in making works that carry a recognizable identity, via repeated form. I am aiming for an everydayness of experienceâ€”signing, marking, making a notation, drawing, scratching and spilling.

I am also interested in the signatureâ€™s ability to call into question our thinking about the idea of authenticity. Signatures should not be pre-meditated, forced or over thought. They should just â€œhappen.â€ We expect signatures to be â€œnaturalâ€ and part of our selfhood. Odd then, that we sign a work of art â€“potentially full of artificial marks? To mark its authenticityâ€¦

CP: Following up on that last question, do you think of “text” as a kind of medium in and of itself? One not necessarily relegated to the page of a book, for instance, but even a free standing element? I suppose another way to ask that question is what is your relationship to text? How does that compare with your relationship to an art object?

SL: I am not sure if text is another medium but it is the element that makes certain media unstable. Is a drawing with text the same as a sign? I mean like a hand painted sign for a yard sale? Is a drawing/ painting with words an agreement, a caption for something elseâ€¦or a list? I think text in visual works of art chips away at the solid place where we see a work of art as self contained and whole and moves it to an in between place–an object without a home. 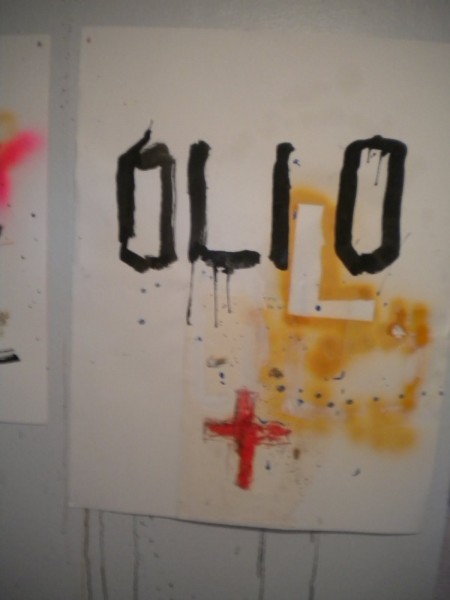 CP: You have a show, “The Construction of a National Identity” up at The Hyde Park Art Center right now. Here too, you seem to examine traditional ways of locating a self in space and time. On the one hand, it seems like you rely on those traditional mechanisms (i.e. national identity, which relates to place and, even more basic, I think, a kind of “naming” or identification of a particular aspect) and on the other deliberately undermine their integrity (in so far as you point to Paella, for instance, or the idea of hybridity in general). Can you talk a little bit about that tension?

SL: Definitions always fall apart. Either breaking away into tautology or crumbling under the weight iof their own defining terms. We are given many terms with which to define ourselves yet none of them match perfectly. We donâ€™t really add upâ€¦Given the hallway space at HPAC it seemed to make sense to push the transitory, ambulatory nature of identityâ€”and the walking nature of the way that we exchange messages with each other in public. The installation is a poem with recipes written on colored walls or recipes for poems drawn on walls or walls marking overheard pieces of recipes signed by a writer. The food materials used to make the piece (saffron, rice, salt, coffee, olive oil, sesame oil and tea all hold associations with place and are part of our everyday lives. We build our sense of self through the repetition of daily rituals of food and drink and mark the day with words and gesture.

CP: Here too I am interested in how you incorporate those elements into tactile mediums. How do you characterize your relationship to your work–in a physical sense? Like when you’re looking at what you make, in your studio, or in a gallery–even when you first approach materials with an intention to “fashion” them–what is your experience of yourself in those moments?

SL: I want my experience and the audienceâ€™s experience to be of the moment–in process and in flux. An experience of everything around and in the piece. I want the experience to be heightened by a sense of the transitory and fleeting and of the potential for change. Not that the pieces change but that they have changed.Â  Materiality is important as it claims or sense of space and makes us aware of our body and all aspects of the sensory world. I use a lot of found objects and like to call into question what makes one object â€œartâ€ while excluding another object from being art. I am drawn to material, older physical objects made by handâ€”objects that contain handmade marks.

CP: When do you find yourself most “the artist”?

SL: I guess I enjoy the making and the time and place when the surprise happens. I am an advocate of the irritation, of mystery and of ambiguity And I need to have aÂ  sense of discovery as I return to the work. I like being in the space.