Note: this is the second in a series of three posts guest-blogged by artist Rachel Mason centering on fellow artists, makers and exhibitors in NYC. 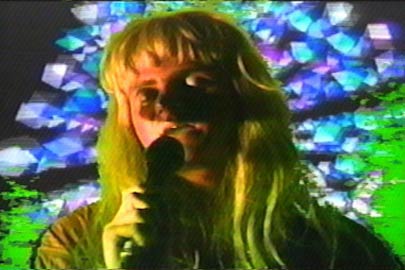 I ran into Mary Boom! at one of Louis V.E.S.P.’s Live TV TapingsÂ in New York.Â Little did I know that Mary, or Bradford Nordeen, was about to be someone I would see a lot more of in the coming year- endlessly curating and creating events throughÂ Dirty Looks, his monthly platform for queer experimental film and video. Many of which I couldn’t attend, becauseâ€¦ there were simply too many! He is an obsessive devotee of cinema made by gay, lesbian and trans artists- and he works tirelessly, to exhibit titles by those practitioners that he finds essential, to gaining a greater understanding of the queer canon â€“ at least thatâ€™s how I see it – and we are the wealthier for it. I am so delighted to have seen some of the film and video work that I might have never seen otherwise, had it not been for Bradford knocking on doors, picking up reels and loading projectors, hosting rooftop screenings of Marie Menken, the Kuchar brothers, Joseph Cornell and Matthias MÃ¼ller, and having galleries like Participant and PPOW Gallery get on board and offer their spaces as forums for this amazing and under-screened work. 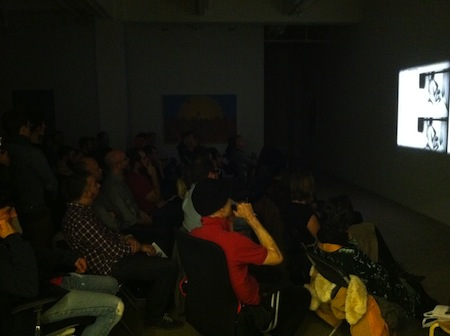 A screening at Dirty Looks, NYC.

I wanted to ask Bradford how he came to celebrate this work, do what he does and share more insights into Dirty Looks.

Rachel Mason: How did the idea for Dirty Looks come about ?

Bradford Nordeen: Dirty Looks was born out of my academic research. I had been writing at great length on the filmmaker Luther Price and, at first, I recreated his installation,Â Meat, 1990, at the Brooklyn alternative space, Louis V E.S.P. in order to gauge audience responses. Then I got my hands on another one of Priceâ€™s films, all of which are difficult to find, A, 1995, and incorporated that into a West Coast program that toured Los Angeles and San Francisco. I was invited by Robert Smith â€“ almost immediately when the screenings hit Facebook â€“ to present the program at the gallery that had just transitioned from Envoy Enterprises to NP Contemporary Art Center, and in talking with Robert to prepare for that screening, I guess we sort of realized that there was no regular, New York city programming to focus exclusively on queer experimental film â€“ a film form that I think epitomizes queer subjectivity directly, as a structural counterpoint to more dominant methods narrative filmmaking. So I said, â€œthen Iâ€™ll do it!â€ But everything really came together when I started working with Lia Gangitano at Participant Inc, who hosted Dirty Looks first and has been instrumental in every step of the process

RM: What did you envision it to be and how has it been manifested- or changed from that vision?

BN: From the start, Dirty Looks has always been conceived in very organic terms. I wanted the series to develop its own model and not force my ideas on it too greatly. Itâ€™s about the audience engaging with the work. Initially that meant folks laughing and having uncanny flashbacks for our first program, where we pitted the early short films of Curtis Harrington (Fragment of Seeking,Â On the Edge) alongside one of hisÂ DynastyÂ episodes. Dirty Looksâ€™ mission, from the get-go, was to position historical artists or texts alongside more contemporary output, to showcase a lineage of queer aesthetic or narrative experience. And people REALLY embraced that â€“ I think thereâ€™s a lot of really passionate people in New York right now who are trying to excavate these legacies â€“ from the organizers and enthusiasts of the Queer/Art/Film program at IFC to the Que(e)ry Librarian Dance Parties. Like them, Iâ€™ve really taken to working with the artists and co-hosts in a very collaborative capacity. Co-organizing events with TRANSLADY FANZINE, Little Joe Magazine, [ 2nd floor projects ], SF and Queer Text reading series at Dixon Place, weâ€™re all engaged in queer education and these creative legacies and we bring our own experience to the table, which is really thrilling â€“ and audiences pick up on that too. Itâ€™s really so rewarding.

RM: What are a few memorable Dirty Looks Moments!?

BN: So far itâ€™s been a really great year. Our first ever screening (this January) took place in the thick of a blizzard, and still, we ran out of chairs. When we were at Participant, during f. p. bouÃ©â€™s show,Â Infinite Instant, he had constructed this tiered pyramid that you could climb on and 20 or so folks used it for seating, first for the very architectural lesbian pirate epic,Â Madame X,Â and then for our mash-up program of Michael Robinson and Jack Smith. For the latter screening, an seemingly horrible circumstance turned wonderful when the soundtrack for the film turned up missing â€“ which is how Jack really intended these works, to be layered with a live mix of records that he would basically DJ in the back of the room. Of course, Jack is not with us anymore, so I frantically contacted Jerry Tartaglia who restored the films in the 90s for some musical suggestions and the result was shocking and uncanny. Whole sound cues carried through from this random sound assemblage â€“ I really felt like Jack was in the room. More recently, we successfully launched a Kickstarter campaign in which nearly 100 supporters helped us raise funds to continue the series. On the heels of that success, we hosted a terrific screening â€“ our biggest yet â€“ on the rooftop at Silvershed, showing films by the Kuchar brothers. Though it had been on the schedule for sometime, I got a call from the brothersâ€™ SF gallerist (with whom we were collaborating on the event publication) and she informed me that the screening was scheduled for their 69thÂ birthday! So, as befits their sensibility, we got ice cream cake and friend and filmmaker, Marie Losier, phoned them up so the entire rooftop could wish them a happy birthday. That was magical, especially since George passed away the following week.

RM: Tell us about Mary Boom….

BN: Mary Boom!, actually. Mary was a character that I developed as a joke for Scott Kiernan and Ethan Millerâ€™s Manhattan Neighborhood Network variety showÂ E.S.P. TV. Scott needed a host and I came back at him â€“ in what I thought would be a joke. I said, â€œwell, Iâ€™ll do it, if I can host it as Robin Byrd.â€ Byrd is this New York icon, probably on par with Los Angelesâ€™ Angelyne. Sheâ€™s been hosting this cable access sex show since the early 80s. Well, in truth, theyâ€™re still running the same programs shot from like 83 -87, or something, so itâ€™s this strange time capsule you stumble upon when youâ€™re flipping through channels, where this druggy sex maven is interviewing dated porn stars and fondling them. My lark had the justification of being â€œmedium-specific,â€ since this was cable access being shot on VHS, and I felt that she was a snarky metaphor for the contemporary art market. So, of course, Scottâ€™s response was, â€œCOOL!â€ I called her Mary Boom!, a play on Mary Boone with a little bit of Joseph Loseyâ€™s trashy Tennessee Williams adaptationÂ Boom!, starring Elizabeth Taylor, thrown in for good measure. So sheâ€™s kind of this messy, horrible power gallerist who takes stabs at dated art terms like â€œIdentity Politicsâ€ without really bothering to understand them. And people really love her. Sheâ€™s got FANS. Though Ms. Boom!â€™s kind of hit hard times now. She used to have a big Soho gallery and one of her recurring jokes addresses her â€œdowngradeâ€ to the Lower East Side. Thereâ€™s talk â€“ with Maryâ€™s assistant, Coco â€“ of doing a spin-off show thatâ€™s more structurally based on Byrdâ€™s interview format, called ArtBoom! 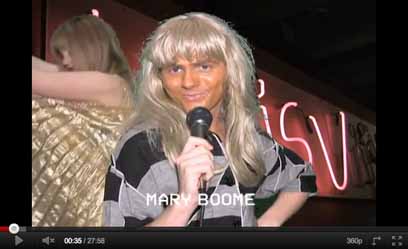 RM: What do you think are some of the differences between more contemporary queer work and that of older generations – working in film.. and maybe we should be specific about eras here.. film, video, and now digital video…

BN: Well, I would say, first and foremost, the gallery factors SO much more into contemporary film/video/DV than it has in the past. Itâ€™s always been there, of course, but I think thereâ€™s currently a greater opportunity for moving image work to get out there, to get seen, to even make a couple dollars off of this format â€“ and here Iâ€™m speaking to the avant-garde or experimental film, not feature-length Queer cinema Ã¡ la Gregg Araki, Todd Haynes, Rose Troche, etc. â€“ which, in the past was not as readily the case. Also, academia and the internet have left really indelible imprints on contemporary queer output, and that, I think, is important to acknowledge. I mean, Ryan Trecartin is a youtube artist. I canâ€™t see someone like Michael Robinson making his films without the kaleidoscopic format of internet, either, however nostalgically his works hark back to recently-outmoded media formats like video and, letâ€™s face it, film. Someone like Ming Wong or even Conrad Ventur â€“ whose work we exhibited in the Female Trouble program â€“ takes a very academic approach to documentation and historiography â€“ Ventur is presently refilming the surviving subjects of Andy Warholâ€™s screen tests, and Wong re-enacts classically melodramatic or â€œfeminineâ€ film scenes with racial hitches to these otherwise white sources. Both of these artists work in crisp video, so that medium tends to aesthetically pique their critiques. I think that many of the adept â€œolder generationsâ€ are nimble and are, if not adjusting to the times, altogether, allowing their historical perspectives to inform their current work. Someone like Luther Price is never going to pick up a RED camera and start editing in Final Cut, but Luther is mining archival 16mm footage, re-editing it as he always has, but also immolating it in even more profound ways: burying it, marring it, handpainting it, so this already nostalgic format becomes fecund in its ability to evoke a distant or psychic past. That said, George Kuchar picked up a video camera when he was 45 and changed the game as far as video art was concerned â€“ long after his early film works. Recently, he was excited to start working with digital 3D cameras, so itâ€™s a really case-by-case basis!

Rachel Mason’s work has been shown at the Detroit Museum of Contemporary Art; the School of the Art Institute of Chicago; the Henry Art Gallery in Seattle; the James Gallery at CUNY; the University Art Museum in Buffalo; the Sculpture Center in New York; Andrew Rafacz Gallery; Marginal Utility Gallery; The Hessel Museum of Art at CCS Bard and at Occidental College. She has performed at venues that include the Kunsthalle Zurich; the Museum of Contemporary Art Detroit; The New Museum; Park Avenue Armory; Club Tonic; Art in General; La Mama; Galapagos; Dixon Place; and Empac Center for Performance in Troy. She has written and recorded hundreds of original songs and performs large scale experimental plays involving dancers, musicians and other artists with her band and theater troupeÂ Little Band of Sailors. Rachel has been featured in publications that include the New York Times; the Village Voice; the Los Angeles Times; Flash Art; Art in America; Art News; and Artforum.