Off-Topic invites artists, curators, writers, and cultural workers to discuss a subject not directly related to the practice of making art. We would like to welcome Elijah Burgher as our latest guest. Earlier this week Elijah participated in the magic-themed Cabinet of Curiosities at the MCA, hosted by Bad at Sports’ Duncan MacKenzie.Â  His Off-Topic post takes the form of a narrated YouTube tour of his favorite group Coil.

COIL ARE MY FAVORITE
Elijah Burgher

On November 13, 2004, Jhonn Balance died after falling from a second floor landing in his home. His death effectively ended the mighty Coil, which he had founded in 1982 with Peter â€œSleazyâ€ Chistopherson. Along with Psychic TV and Chris & Cosey, Coil rose from the ashes of Throbbing Gristleâ€”Sleazy is a member of TG, who recently resurrectedâ€”and, with Current 93, Nurse with Wound, 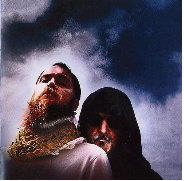 Death in June, plotted a new course for the various strains of experimental music that issued from the first wave of industrial music in the mid-to-late 70s. For more information about the bandâ€™s history and recordings, look at the Threshold House site, Brainwashedâ€™s Coil page, or the brief entry on them on the Disinformation site.

Coil are also my favorite. I love a lot of things, and have named possibly hundreds of artists, bands, filmmakers, books, etc. as my â€œfavoriteâ€ at one time or another. When Claudine asked me to write an Off-Topic post for the BaS blog, I knew I wanted to write about something that I loved, and considered Swansâ€™ Children of God, Dennis Cooperâ€™s George Myles cycle, and Pasoliniâ€™s Salo, the latter of which Iâ€™ve seen too many times to justifiably claim anything resembling mental health. But Coil really are my favorite. They are what I listen to when I work in my studio. And I have a Coil t-shirt that I consider a good luck talisman and wear when I feel particularly stressed out or sad. They inspire exactly this type of ecstatic, pathologically intense fandom in their followers. For this blog post, Iâ€™ll be leading you through some of my favorite songs by the band.

Balance had long suffered from alcoholism and drug abuse, which contributed to his untimely death. Since we started with news of his death, here is â€œHeartworms,â€ where he reflects self-deprecatingly on his addictions, intoning â€œthereâ€™s too much blood in my alcohol.â€ (Also I stole the name of my drawing blog from a lyric in this song: â€œGhosts vomit over me.â€) An enterprising YouTuber has added a super 8 short by Derek Jarman for visuals:

I first heard Coil when I was a teenager and a big fan of industrial music. I loved Ministry, Revolting Cocks, Pigface, and My Life with the Thrill Kill Kult. Originally, I had picked up their cd, Loveâ€™s Secret Domain, because Iâ€™d buy anything Wax Trax put out. It came out in 1991, so I must have been 13 or 14 since I didnâ€™t buy it too long after it had been released. That record soundtracked much of my high school years, from toothy teenage blowjobs to acid comedowns watching the dancing patterns of my bedsheets, and numerous late night sessions hunkered over my journal writing bad poems and drawing cute boys. I remember playing their track â€œThe Snowâ€ on repeat. It is now a veritable classic of early 90s house music, albeit still somewhat anomalous for the genre. Here is the â€œAnswers Come in Dreams IIâ€ remix from â€œThe Snow Epâ€:

Loveâ€™s Secret Domain was their â€œdanceâ€ record and showed the band playing with sounds, rhythms, and other signifiers of acid house. Remember the title of the record is Loveâ€™s Secret Domainâ€”LSD, get it? Here is â€œWindowpane,â€ an ode to altered states of consciousness. A good friend once told me he found the song terrifically boring, but I canâ€™t get enough of it. The same friend also recently pointed out to me that I share my birthday with lysergic acid diethylamide. How did this go unnoticed for thirty-two years? Anyway, in the video, Balance dances like a latter-day shaman in the Mekon River in Thailand, presumably under the effects of this famous chemical:

The album cover alone captured my imagination: a fiery red penis sporting blue bird wings and spurting semen into a psychedelic storm of reds and oranges. A few stray images emerge in the background: a skeleton, an eyeball, a pentagram, the hand of Fatima. Unfurling along the bottom of the image is a ribbon emblazoned with the phrase: â€œout of light cometh darkness.â€ It is a painting by Steven Stapleton of Nurse With Wound. 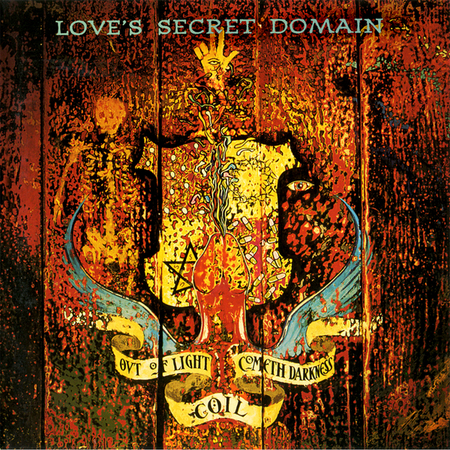 The mixture of the occult, psychedelia, and dark homoeroticism in the imagery gets at the core of their sound, which was otherwise mutable and generally difficult to classify in more specific terms than â€œexperimentalâ€ or â€œpost-industrial.â€ For instance, their music was based in electronics, making use of synths and samplers, but they also brought in collaborators to play guitar, hurdy gurdy, and didgeridoo. And while Balanceâ€™s voiceâ€”by turns warmly sensual, gravely poetic, and viciously hystericalâ€”was an integral part of Coil, they also put out a number of instrumental records.

Scatology (1984) and Horse Rotorvator (1987) are the other two essential Coil records. The latter, their first proper record, is a true classic of the industrial genre. Along with Throbbing Gristleâ€™s â€œDiscipline,â€ songs like â€œPanicâ€ and â€œSolar Lodgeâ€ on this record laid the blue-print for the industrial from the late 80s and early 90s that I loved so much at the time. Scatology is a concept record about excrement and all things anal. The cover of the record shows youthful ass cheeks framed by an inverted cross, and the black sunâ€”an alchemical concept that reappears throughout their discographyâ€”at the bottom of the image could certainly also be read as an asshole. But the band is not only being aggressive about their presentation of homosexual desire; their interest in excrement is also alchemical: shit transmuted to gold. The alchemical concept is related to their approach to sound, manipulating rudimentary noise and samples into cathartic, trance music. It goes the other way too, such as the clarinet in â€œIn The Heart Of It All,â€ which sounds like a painfully expiring sea mammal:

Coilâ€™s cover of â€œTainted Loveâ€, the closing track on Scatology, slows the song down to an oppressive dirge, transforming it into a lament about the emergent AIDS epidemic. The band released the song as a 12â€ in 1985. All profits were donated to an AIDS charity, and it was actually the first AIDS benefit musical release. Hereâ€™s the fantastic video, which features Marc Almond as the angel of death:

Coil began incorporating folk and jazz elements on their next full-length, Horse Rotorvator, helping usher in the nascent â€œapocalyptic folkâ€ movement along with Current 93, Death in June, Sol Invictus and others, although their sound is really too eclectic on this record to fit neatly into that category. The specter of Pier Paolo Pasolini weighs heavily on this record, whether in the Salo-like imagery of â€œCircles of Maniaâ€ or their dedication to the director, â€œOstia (The Death of Pasolini),â€ in which they find a resonance in Pasoliniâ€™s murder with Aztec sacrifice. The queer auteur and radical is â€œkilled to keep the world turning.â€ The shrill string arrangements are by Jim Thirlwell of Foetus. The following video was recently made by Sleazy for a new Criterion edition of Salo.

After Loveâ€™s Secret Domain, Coil began work on a follow-up, Backwards. Basic tracks were laid down at Trent Reznorâ€™s New Orleans studio, but the projectâ€™s completion was endlessly deferred while the band willfully sank into obscurity, putting out a series of limited edition and subscription-only releases that were often driven by occult concepts. For instance, they released EPs for each of the solstices and equinoxes, collaborated with an extra-terrestrial intelligence they dubbed ELpH on â€œWorship the Glitch,â€ and created a record of ambient tones to facilitate time travel, â€œTime Machines.â€ Theyâ€™d long been releasing similar records with magickal intentions. Their first release, â€œHow to Destroy Angels,â€ was composed of ritual gong music for the â€œaccumulation of male sexual energy.â€ My favorite is probably â€œConstant Shallowness Leads to Evilâ€ from 2000 in which the band wages a war of magical attack on the Western culture of excess with vicious spasms of electronic noise. It literally sounds like your eardrums are getting electrocuted.

In 1999 and 2000, Coil released two subscription-only records, Music to Play in the Dark Vols. 1 & 2, in which they turned their attention to lunar, â€œfeminineâ€ energies. Although the first three records are rightly considered their classic trilogy, these two discs are hands-down my favorites and get the most play on my stereo. They are both somber, nocturnal records, as their name suggests. Balance mainly speaks while synths burble twinkle, surge and simmer. â€œRed Birds Will Fly Out Of The East And Destroy Paris In A Nightâ€ sounds like Tangerine Dream scoring the end of the world. â€œBroccoli,â€ probably my favorite track on the first volume, reflects on mortality and the turnover of generations.

Iâ€™ve long obsessed over the track â€œWhere Are You?â€ on the second volume. This particular lyric has haunted me for several years: â€œPoor little ghost boy / Let me be your human toy.â€ I have felt Balance as a presence in my apartment and my studio in the past, and an ex of mine believed that Balance attempted to possess him while we were having sex once, blaming me for experimental rituals I was conducting around our place. Whether due to a willfully hyperactive imagination or not, such supernatural connections to artists via their artworks are in keeping with Balanceâ€™s own relationships to certain of his heroes. Balance believed, for instance, that he was able to communicate with the 20th century occultist, Austin Osman Spare, through his paintings, which he collected.

In the early 00s, Coil began playing a series of live shows internationally. They hadnâ€™t performed live save a handful of shows in their earliest days. It is apparent from their various live discs and the ample footage available on YouTube that they were ferocious on stage. Iâ€™ll sign off with another of my absolute favorites, â€œWhat Kind Of Animal Are You?â€ Iâ€™m a snow leopard, by the way.

About the poster: Elijah Burgher is an artist and writer based in Chicago, IL. He has most recently exhibited in a solo show at Shane Campbell Gallery in Oak Park, IL and a two-person exhibition at Peregrine Program in Chicago, IL. He will exhibit work in group shows at Johalla Projects in Chicago and Envoy Enterprises in New York this summer. He maintains a hybrid studio wall/magick diary blog at http://ghostvomit.blogspot.com/. Burgher co-founded and co-edited the now-defunct art publication BAT. He has written reviews and essays for ArtUS and several small art publications in Chicago, as well as contributed writing to Art:21’s guest blog. He received an MFA from the School of the Art Institute of Chicago in 2004, and a BA from Sarah Lawrence college in 2000, where he split his credits amongst Literature, Visual Art, and Cultural Anthropology.

Got a response to this post? Let us know! Email your comments to mail@badatsports.com. Weâ€™ll feature thoughtful responses to issues generated by our posts in our Letters to the Editors Feature on Saturdays.