There’s been some commentary on other art and culture blogs about this, so maybe we should get into it too: The Art Institute has raised its price of admission by 50%. Now, the general public will pay $18, seniors and students pay $12, up from the $7 it was previously.

There have been a few good pieces on this issue written elsewhere over the past couple of days; in particular I liked Tyler Green’s post over at Modern Art Notes, Museum cannibalism: pricing out visitors. Green points out that Chicago museums are more reliant on admissions revenue than are institutions in other cities, but nevertheless decisions like this make it much harder for average folks, especially younger demographics, to make museum-going a regular thing. Salient quote:

Green then followed up with this post about the Seattle Art Museum’s “pay if you can” admissions policy, with accompanying grey-skies ad campaign. What think you? 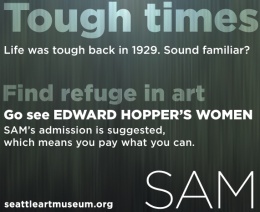 EDITED TO ADD: Someone rightly pointed out that there’s more to the admissions story: free days! Here they are, straight from the Art Institute’s web site:

Go directly to the Art Institute’s visitor page for even more details. Plus, children under 12 will continue to get in free of charge, and there will no longer be a charge for special exhibitions or coat check.