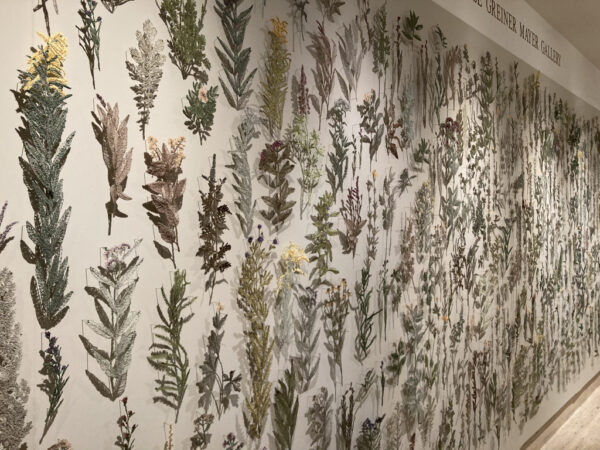 Interventions into museum collections, a still-evolving staple of exhibition schedules, often allow close readings of acquisition narratives while they let artists stretch the domain of the curatorial. Amanda McCavour’s exhibition, “Suspended Landscapes” at the University of Wisconsin-Madison’s Chazen Museum of Art commemorates the institution’s 50th anniversary and strides the boundaries of artist/curator. This charismatic show consists of two interrelated installations that amplify the subject of nature and localism facilitated by the artist’s selective quasi-documentation of the “study collection.” Various archives represented include the Helen Louise Allen Textile Collection, the UW Libraries’ Special Collections, and the Wisconsin State Herbarium.

The introduction to McCavour’s project in the Mayer Gallery is fundamentally descriptive and contemplative, while the larger is more conventionally and logistically theatrical. In the Gallery, no less than 500 of the artist’s life-sized machine-embroidered representations of Wisconsin plant life cover the back wall. Just outside the space an overwhelming print-aided waterfall of enlarged inverted plants flood the space of the monumental Paige Court in the museum’s older Elvejem Building, a spectacle that transforms and naturalizes the museum’s ceremonial architectural identity. The difference between the two spaces is spatially and psychologically significant. Each massage a particular audience demographic and museum display context where spectacle is a dizzying amplification of a rigorous survey and documentation of place, through materials.

The small works are selected elements of McCavour’s monthslong research that configure native vegetation of the Wisconsin landscape and reveal a dialect and pattern of craft through the illustration of a botanical system, while detailing an institutional collection, which provides her project veracity and gravitas. McCavour’s show outlines a relationship between rarified, sometimes exotic, scientific collections and the treasures of libraries and fine art museums. She also provides a crucial glimpse into the relationship between craft and its key to the history of aestheticization outside the gilded halls of museums. Her replicas of botanical life in the demanding technique of embroidery express not only the artist’s will to aestheticize but examines the bedrock of Western aesthetics which rests in nature. The process is suspended somewhere between art historical scholarship and the maintenance of craft traditions. McCavour exploits her resources with a close regard for natural systems and examines the perimeters of fine art and domestic narratives to encounter a hybrid body of knowledge.

McCavour’s embroidery is exceptional, based on stitching skills alone. Her method of sewing into water soluble material adds technical and aesthetic dimensions that involve a considerable degree of improvisation and risk. When finished, each piece is immersed in water and the embroidered thread has to sustain suspension on its own. The image and substrate collapse into one. Thread becomes line. Embroidery becomes drawing. Image and the referent are semiotically fused – sign becomes signified.

In the Mayer Gallery, an embroidered digital garden hovers on a floor-to-ceiling grid. It’s flanked by works on paper selected from the Chazen’s collection of botanical images and makes a case for the variability of modernism, particularly the domestication of Dadaism. In Paige Court the enlarged digital prints of McCavour’s scanned embroidery produce a kind of Brechtian rainforest on elongated tulle skins. Titled “Ode to a Prairie,” sixty transparent bands packed with plant imagery descend for three floors of the museum’s central court. Comprehending the operatic installation’s dimensions require endless adjustments in orientation. 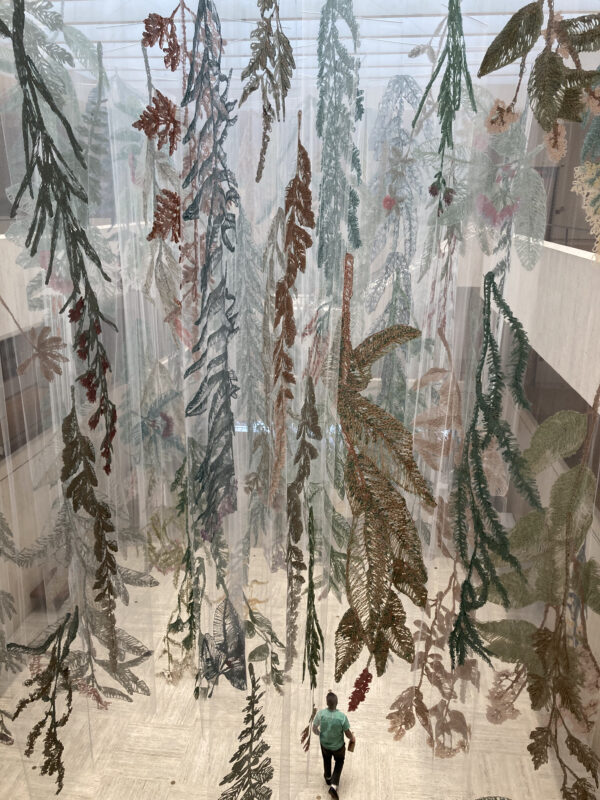 Amanda McCavour, “Ode to the Prairie,” Photo courtesy of the Chazen Museum

Even if the original avant-garde rejected classicism and asserted the present as the only harbinger of aesthetic legitimacy, its consequence occupies a conceptual and authorial debate about value, not limited by time or space. Subsequent generations have produced a thread of relativist subjects that contain an ideological critique, argue over disciplinary autonomy and substitute the temple, the university, and the courthouse with the museum. The legacy of found objects blurred the borders between art and ordinary experience and normative professions. The objective was the rejection of middle-class tastes that ignored the possibility of inquisitive, benevolent revolutionary culture. Some would have that the production of objects and the consideration of landscape, especially beautiful ones, surrender that conviction. Others would hold that the legacy of hand-made objects certified by the more conventional instincts of a mass audience is a shrewd strategy to challenge the relativist and opportunistic nature of modernism which requires regular adjudication. Along with the anxious narratives of our avant-garde ancestry, the environmental clock ticks rapidly on McCavour’s poetic landscape.