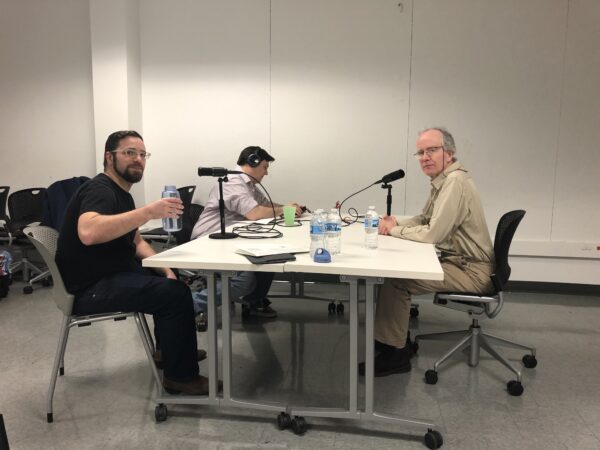 Philip von Zweck speaks with Seth Brodsky about Gray Sounds, a new experimental sound and music series at the University of Chicago’s Gray Center for Arts and Inquiry.  On the occasion of the inaugural Gray Sound event Seth, Philip and Zachary Cahill talk with composer Peter Ablinger about “experimental” music, his work, noise, phonorealism, making a piano speak, and a host of other topics.

Peter Ablinger is an Austrian composer living in Berlin. He was recently in Chicago for a series of performances, lectures and an installation as part of Grey Sounds a new series produced by the Gray Center for Arts and Inquiry at the University of Chicago.

Seth Brodsky is the Director of the Gray Center for Arts and Inquiry and Associate Professor of Music and the Humanities at the University of Chicago. He is the author of “From 1989, or European Music and the Modernist Unconscious” (California, 2017), and has published on such topics as opera, influence, and the music of John Cage and Benjamin Britten. He is currently at work on a book about music, psychoanalysis, and repetition.

Zachary Cahill is Director of Programs and Fellowships at the Gray Center for Arts and Inquire and Editor in Chief, Portable Gray.

Philip von Zweck is an artist, occasional curator or writer and was weirdly, briefly faculty in the Conservatory of Music at Brooklyn College, CUNY. From 1995-2010 he was the host and producer of Something Else a weekly radio program of experimental music, sound art, and live performances on WLUW.  He would like to thank composer D. Edward Davis for his help on this program.