It’s December. The time of year when all the ‘Best Ofs’ and just-in-time-for-Christmas reviews spill out from the internet, beckoning you to consider your engagement with the year just passed. In January of this year, I was invited to “write something” about Institutional Garbage, a book published by The Green Lantern Press and edited by Lara Schoorl in conjunction with an exhibition of the same title. Like the residue that is the content in the book itself, my review got buried in the rubble of other demands. So as I (finally) sit down to write, three things are at the top of my mind:

This, of course, is subjective. But in this case of this review, given that Institutional Garbage the exhibition took place in 2016, that Institutional Garbage the book was published in 2018, and that my review of it takes place in the final dregs of 2019, I think it’s safe to say we’re in the garbage zone. Thus, I posit this a sort of ‘anti-review review’: one so late as to hardly be useful, and which is more a reflection on the possibility (or impossibility) of the book’s content, rather than a review of ‘come hither’ promotional value. Another trace. 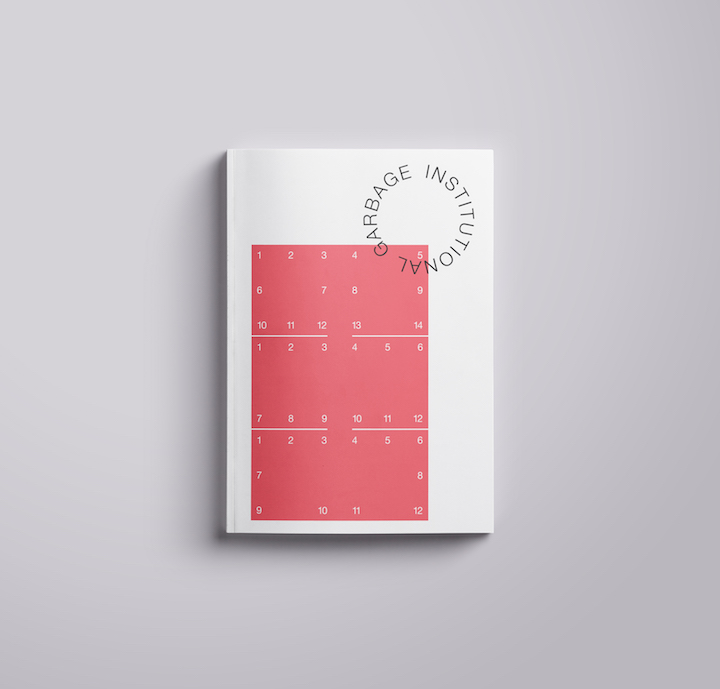 So, what was (or is) Institutional Garbage?

According to those in charge of describing it, it (is/was) an experimental publication that endeavors to grasp the memory, feeling, and trace of an online (and physical) exhibition that took place in the fall of 2016 through Sector 2337. The (no longer extant) gallery’s website states that it is “the administrative residue of imaginary public institutions produced by artists, writers, and curators. Contracts, email correspondences, documented unproductivity, syllabi, scanned objects, obstacle courses, and other fragments were collected to illustrate the backend activities of imaginary bureaucracies, to trace the private life of institutional endeavors.”

But what (is/was) it really?

Having been to the physical space that was Sector 2337 three years ago during the time of the original exhibition, I have some impression. There were details about the exhibition printed on paper towels in the gallery’s bathroom by artist David Hall, which viewers wiped their hands on and promptly tossed (I kept mine, to add to my ironic consumable-art collection – ever more ironic in the face of Maurizio Cattelan’s recent exploits). There were physical performances, and a website I was encouraged to (and, my apologies) did not really engage with. Probably there were other things. Then came this book. 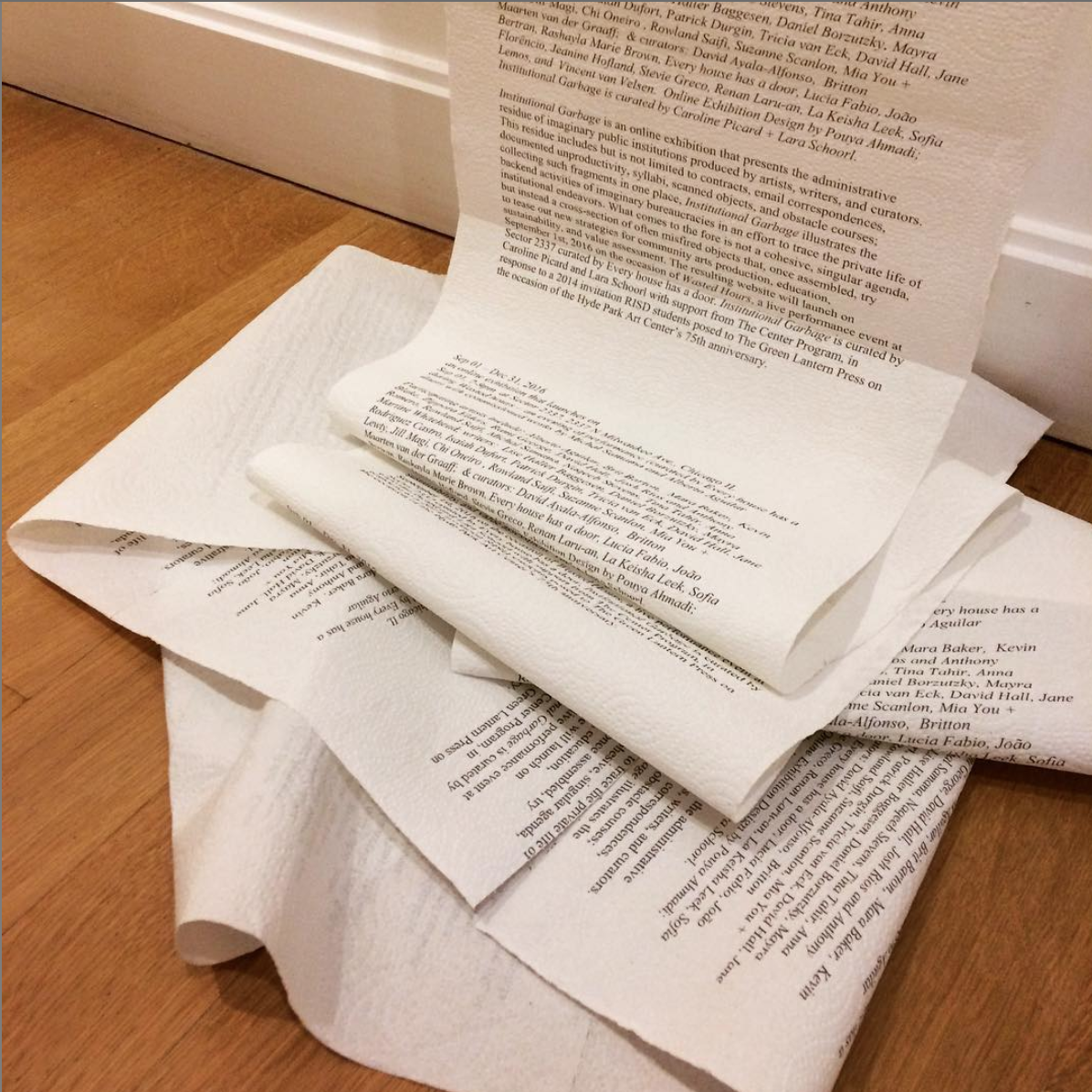 The authors of Institutional Garbage encourage you to go through it in any direction or order, which I promptly ignored in favour of a classic cover-to-cover engagement. The book, after all, does nothing to break convention. It is artfully designed in a way that I can only describe as contemporarily Dutch, like many of its contributors. (I get off saying this because I’ve lived in The Netherlands for the last two years, and trust me – any poster in any city for any purpose is done with near identical visual cadence and designerly minimalism, down to the Helvetica Neue and Knif Mono typefaces). In the midst of this perhaps atopical slickness, reading this book is a bit like an act of rummaging. I will categorize and highlight a few “finds” here:

In the end, what struck me about Institutional Garbage was how my experience reading it was so very unlike the process of sifting through trash (a task that I have, in varying states of poverty and privilege, done a great deal of). The book does self-consciously attempt to complicate itself in some ways, as with the curatorial section largely blanked out with white ‘paint’ (then promptly ‘explained’ by descriptions of the actual events curated for Sector 2337), with images of these performances Ben Day dotted to near oblivion, and with mixtures of fact and fiction. But the strong curatorial vision and inherent desire to preserve the integrity and relevance of its contributors is staunchly maintained.

Perhaps the only clear thwart I found was buried deep in Institutional Garbage, in Jill Magi’s “Curious, Fugitive, and Unedited (The Art Labor Archive of Teaching Days).” In this writing, Magi re-presents “the detritus of in-class writing exercises” by her students as part of her own work titled “The Labor Archive.” It is unclear whether or not she obtained permission for this, but her “dangerous citational practices” are precisely where the rubber meets the road. As any homeless person in the United States could tell you, trash becomes public property once it leaves private grounds. This is what makes dumpster diving possible, and why some businesses have resorted to compacting or, even more heinous, to poisoning food waste to keep humans out of it. In some ways, I almost wish the creators of this publication hadn’t curated or commissioned anything at all, but rather had taken what they wanted from what institutional garbage they could access. What would the ramifications have been for a publication which picked through digital trash, and braved negotiating the line between digital garbage and digital property?

In their emails to one another, Caroline Picard and Lara Schoorl speculate on the impossibility of a perfect, imaginary, “alternative, ideal, utopic institution” might look like. As a reader, the more pressing questions at hand seem to be these: are curating and garbage-making polar opposites? And what does it mean for curators to ‘make garbage’ (render slightly less clear, slightly less complete, and in some cases, slightly less contextual) the practices of art-adjacent people? I’m reminded of Marcel Duchamp’s “sixteen miles of string,” which in order to achieve its overarching vision intentionally paved over and inhibited viewing other work in the exhibition. Contemporarily, of course, it’s a dating faux pas to view curation in this light. In Institutional Garbage, Tricia Van Eck produces a hand-written letter called “Alchemy and Curation,” stating that “[…] it’s important for curators and artists in group shows (and even in solo shows) to share the oxygen in the space for all artworks to breathe.” Trash is stifling – it erases meaning through its surplus of meaning and scarcity of space. Aesthetically, this book has a lot of breathing room.

Of course, proclamations of impossibility and desirable failure such as those in the correspondences between Schoorl and Picard are like get-out-of-jail-free cards that anticipate any potential wrongdoings. But I think the real key to Institutional Garbage lies in Fulla Abdul-Jabbar’s essay, “Always,” at the book’s end:

“What we really want from our time with this book is that which is not this.

I don’t think you mean to sound that way.

Perhaps you can rephrase this.

Can you expand on this?”

To which we respond, of course, always. But not now.

On a small shelf in my house a sun-baked candy from Félix González-Torres “Untitled (Portrait of Ross in L.A.)” oozed and leaked in dangerous proximity to my Ai Weiwei “Sunflower Seeds.” So I took David Hall’s paper towel program and wiped it up. I’m not sure, but I think this has something to do with art. 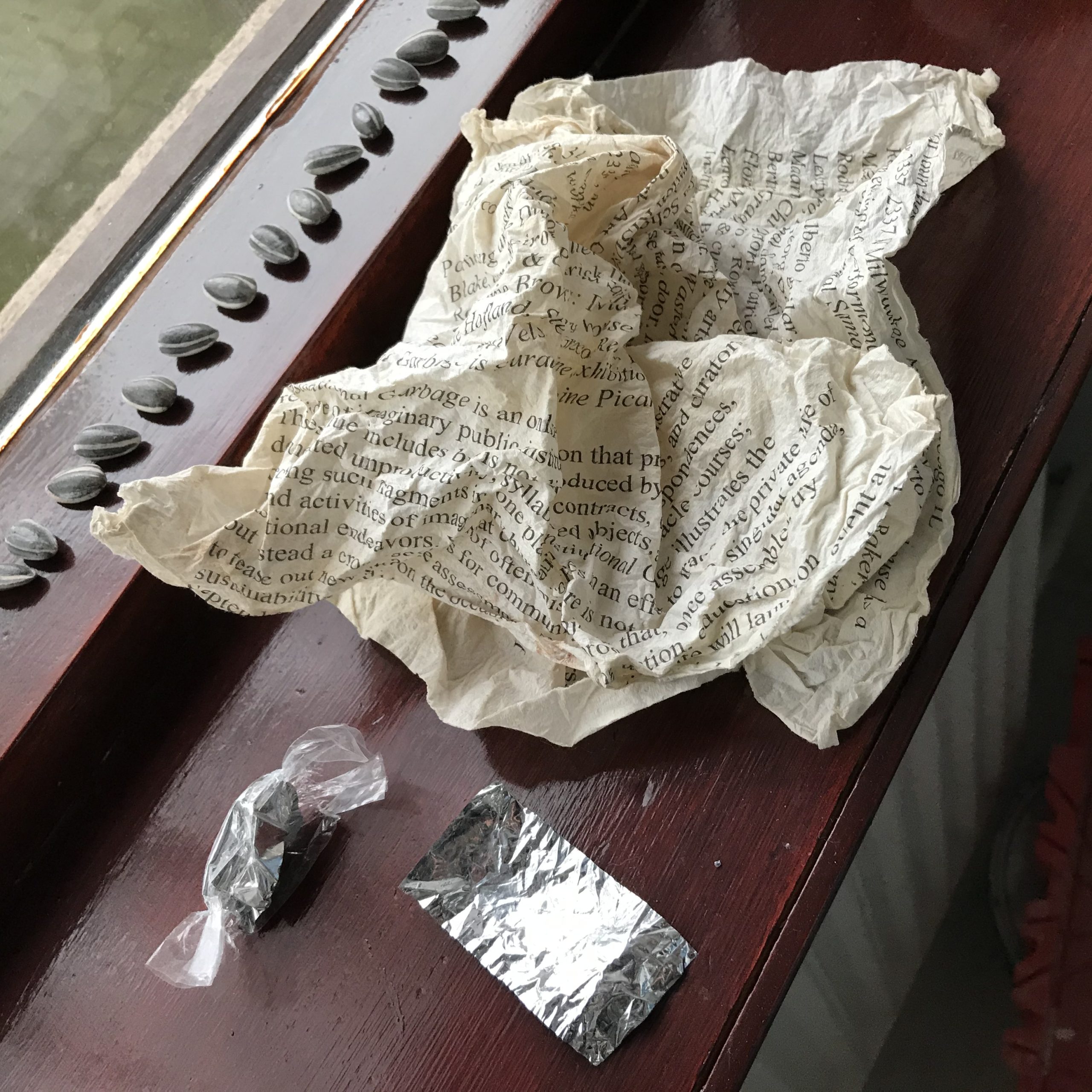