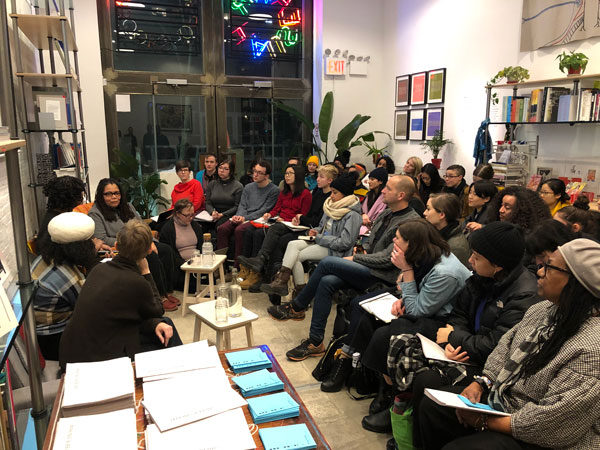 How do artists create contexts for encounters with their projects that are aligned with their goals?

Linda Goode-Bryant is the Founder and President of Active Citizen Project and Project EATS. She developed Active Citizen Project while filming the 2004 Presidential Elections and developed Project EATS during the 2008 Global Food Crisis. She is also the Founder and Director of Just Above Midtown, Inc. (JAM), a New York City non-profit artists space. Linda believes art is as organic as food and life, that it is a conversation anyone can enter. She has a Masters of Business Administration from Columbia University and a Bachelor of Arts Degree in painting from Spelman College and is the recipient of a Guggenheim Fellowship and a Peabody Award.

Heather Dewey-Hagborg is a transdisciplinary artist who is interested in art as research and critical practice. Heather has shown work internationally at events and venues including the World Economic Forum, the Shenzhen Urbanism and Architecture Biennale and PS1 MOMA. Her work is held in public collections of the Centre Pompidou, the Victoria and Albert Museum, and the New York Historical Society, and has been widely discussed in the media, from the New York Times to Art Forum. Heather is also a co-founder of REFRESH, an inclusive and politically engaged collaborative platform at the intersection of Art, Science, and Technology.

Salome Asega is an artist and researcher based in New York. She is the Technology Fellow in the Ford Foundation’s Creativity and Free Expression program area, and a director of POWRPLNT, a digital art collaboratory in Bushwick. Salome has participated in residencies and fellowships with Eyebeam, New Museum, The Laundromat Project, and Recess Art. She has exhibited and given presentations at the 11th Shanghai Biennale, Performa, EYEO, and the Brooklyn Museum. Salome received her MFA from Parsons at The New School in Design and Technology where she also teaches.

What if the organization of labor was integral to your project?

Members of Meerkat Filmmakers Collective and Friends of Light