What You Should Have Noticed in July

Good god damn, summer in Chicago! The storms, the ‘fests, the beautiful bodies, the fruit flies, and most of all the regular monthly blog posts. This year’s most tolerable season in Chicago has brought with it plenty of new beginnings and other moves: artists, having used up their two year grace period after grad school, are making their destined migrations to one coast or another; galleries are closing, opening, and relocating; and rents are increasing everywhere. Together, you and I will track these changes, along with all what other what there is in What You Should Have Noticed in July.

Shakeup at the independent gallery Julius Caesar as local artist and professor Dana DeGiulio has officially left her position as the gallery’s co-operator. I suppose she’s still co-founder, along with the other originals: Diego Leclery, Colby Shaft, Hans Peter Sundquist, and Molly Zuckerman-Hartung. Chris Naka is also leaving the gallery’s directorial board. According to the exit letter posted by DeGiulio on July 20th, management of Julius Caesar will pass to Maddie Reyna and Levi Budd, both recent MFA graduates from the School of the Art Institute of Chicago. May the new blood take.

Other shuffles were written up by Jason Foumberg for an article at NewCity: Jessica Cochran is leaving the Center for Book & Paper Arts for the private sector, Jamilee Polson Lacy is saying goodbye for a sweet gig at the Providence College Galleries in Rhode Island, Joel Keunnen is leaving ArtSlant Chicago for ArtSlant New York City, and Cortney Lederer is leaving Chicago Artist Coalition for her own venture, CNL Art Consulting; you can check the article for the rest and more. More bad news too – Edie Fake is leaving for Los Angeles! And Sofia Leiby for somewhere else! And Kate Ruggeri for Yale! Madeleine Bailey is out too! Julia Hendrickson is already in Austin! This happens every year!

In darker news, scientists at Surrey Nanosystems made headlines this month by revealing their latest product: Vantablack, or nanotube black, a coating of vertically aligned carbon nanotubes capable of absorbing more than 99.85% of light, thereby creating the blacking black to ever black. While artistic applications are still forthcoming, you might imagine a cross between a Katharina Fritsch and those monsters from Attack the Block: a sculpture as shifting silhouette, flattened into two dimensions by the absence of interior lights and shadows, like a black hole in illuminated space. 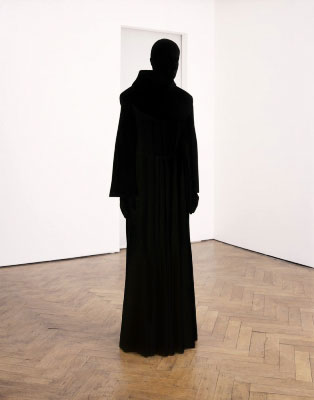 In lighter news, the family owned retailer Genesis Art Supply, beloved to Logan Square and the blue line neighborhoods, will be moving from its endearingly crowded space at Western and Fullerton to new and bigger digs on Elston, near the Riverfront Plaza – you know, by the big Target! Set for an October ribbon cutting, the new space will provide later hours, more parking, and a brand switch to ArtSupply.com, owner Rich Goldman’s longtime online storefront (and where I purchased the very same desk where I am currently typing this article). The current location at 2517 N. Western Avenue is having deep cut sales, so be sure to go notice the hell out of it before the good stuff is gone. 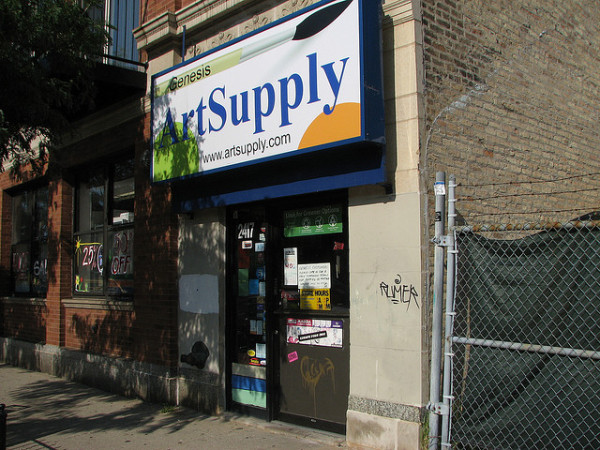 In darker news again, Peanut Gallery is leaving its convenient home beside the California Clipper in Humboldt Park, after being forced out by new development in the area. The funky studio collective / exhibition space, led by Charlie Megna and Kelly Reaves, will be replaced by a cozy pie and ice cream space, a generous move by landlord Gio Battaglia to satisfy the city’s need for more independently run, alternative venues for emerging dessert culture. While the gallery is seeking to relocate (perhaps to Logan Square? But that’s some T for some other article), the other victim of the same neighborhood vitality it basically created out of blight or at least obscurity, Knockbox Cafe, will be shuttered this fall forever. 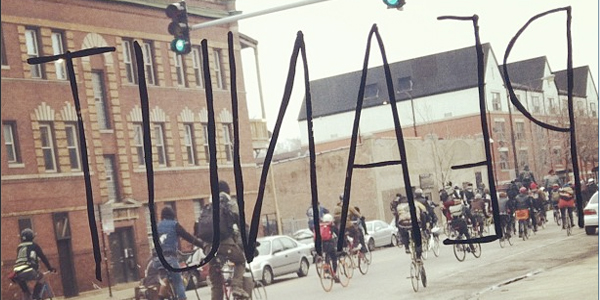 This month we learned that Japanese artist and quiet pillar of Conceptual art, On Kawara, passed away in late June in New York City. Most famous for his meditative date paintings, produced in a maximum of one day on various days in the artist’s life, as well as for his earlier and perpetually haunting “I am still alive” telegrams, Kawara’s passing marks both the end of a life and the end of an art more intimately tied to life than most. 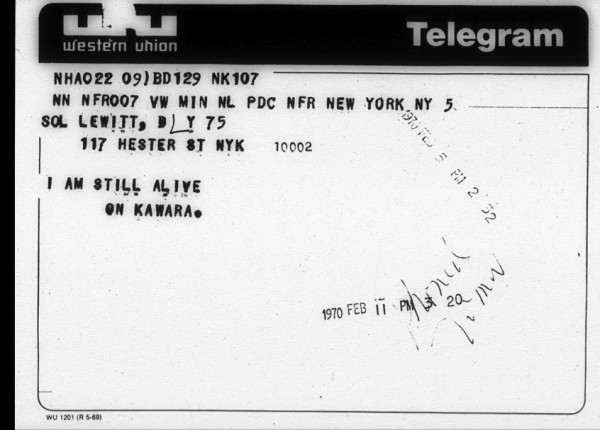 You know, because I publish this article on the last Friday of every month, I court the possibility of months like this one, where the article falls on the earliest possible Friday of the month, the 25th, meaning I’m really only sharing what you should have noticed in three and a half weeks. I worry that Saturday morning will have some big news – like maybe the opening of another Ed Paschke Art Center – and history will wonder why I’d left it out. Other times, like right now for example, I’m glad that I can reward the present and direct your noticing eyes to a subject before it is too late: the DCASE (Department of Cultural Affairs and Special Events) residency at the Chicago Cultural Center, also known as the Studio Artist and Curatorial Residency Program. The program looks fantastic, offering six residencies (either public or private) along with two curatorial fellowships to artists at all levels of their career. Both residencies come with the support of the Cultural Center (technical, promotional, and PR), a $2,000 / month stipend for three months, and more. While big news for the present – you still have six days left! – the residency is also perhaps the first really major investment in the city’s visual arts from DCASE, which formed in 2012 from the slaughtered slurry of the Chicago Office of Tourism and Culture. Cheers for the new program, and good luck to the applicants. 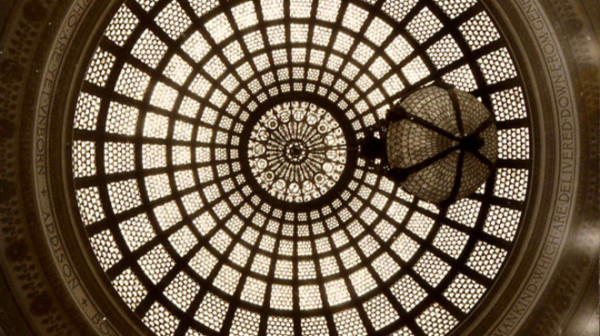 Are you an artist of some kind? Theaster Gates is looking for thirty two tenants at the Dorchester Art+Housing Collaborative, his new Grand Crossing artist’s housing and studio compound on Chicago’s south side. Check out details at Rebuild Foundation, or call (773) 324-2270. 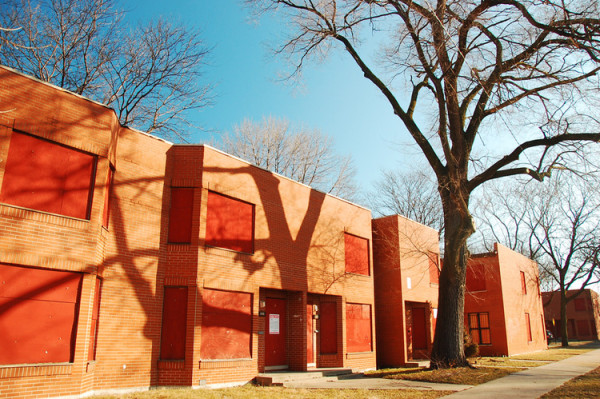 And that’s it! Other notable mentions include those weak ass white flags in Brooklyn (project whatever meaning you wish upon them), Jaume Plensa‘s new and pretty impressive addition to Chicago’s Millenium Park (which already features giant heads by Plensa in his Crowd Fountain sculpture), wars, and Rokudenashiko’s 3D-printed vagina scandal in Japan. Until next month, keep watching the skies!