Our Calamity is Our Providence

I have an incredible ability to scare myself. To retreat from my ideas. To sprint in the opposite direction of responsibilities I don’t care to recognize. I have an incredible ability to demobilize myself. To put my action at bay. To halt my creative process. To suffer from external fears without hope of escape. These fears are a construction–a product of institutionalized art making and thinking–yet that knowledge does not offer freedom from its grasp.

Reality is a difficult reality. The reality of being an artist today is one I’m perpetually trying to negotiate. Beyond the much publicized and widely discussed art school debate and the massive debts these requirements accrue, there are myriad legitimate reasons to grow leery when met with the decision to keep making art in fear of things not working out. Its not only artists, however, whom are dealing with the economic conundrum that forces them into careers they never imagined due to overpriced corporate educations whose products often transport its patrons into saturated fields of under-paid positions that result in the inability to crawl out from underneath the oppression of student loan debt. This is a viral condition and an alarming state of affairs. It is also not a revelation–we know the facts and statistics before we sign the dotted lines and do so with that special kind of hope that the success stories of others and our egos will instill in us. 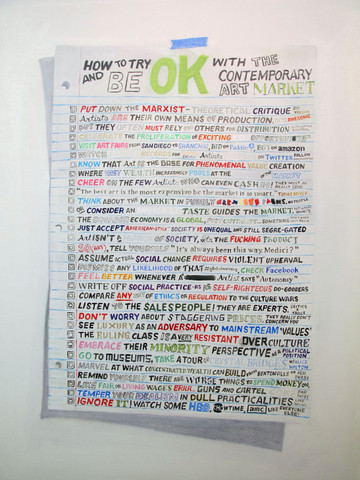 This phenomena poses questions that create debilitating anxieties for an artist–for me. Though unlike other specialized fields, artists are expected–even taught–to understand that they will be broke, busted, and holding onto coattails until the pieces magically fall into place. Conversely, it is also stressed that if your career is to be a success, magic will have nothing to do with it. Statistically speaking, the reality is this: its not going to work out–not the way you had hoped, but thats not the worst of it, nor does that assume there will be no highlights. Its just the reality.

I am not alone. My anxiousness is something shared. In Chicago, this collective anxiety is amplified through the idea of geographical displacement from a centralized art world, the lack of collectors, the shortage of funding, and the scarcity of opportunities–to name a few. Yet, artists in Chicago press on or move on. They create their own opportunities, or abandon this place in hopes of more on either coast. Chicago artists watch their creations grow to a ceiling–a roof that represents the limits of possibility in this part of the world. That canopy is clear from afar and can cripple you. Or it can help you discover ways around it. Through it. To raise the bar. 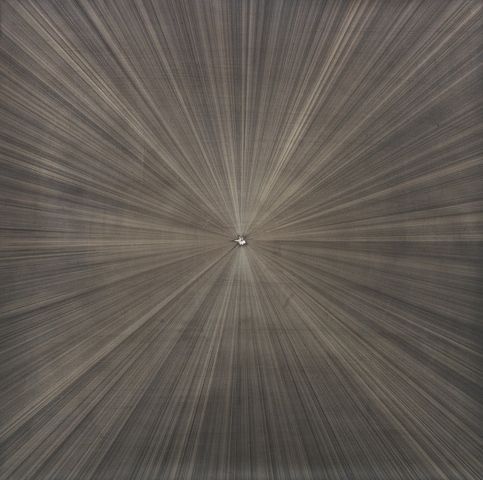 In Chicago, this anxiety is in the work. It is in the air. It is underscored, coded, subliminal, and refined to resemble a product suitable for trending discourse somewhere else in the world. In Chicago, the narrative dominates–it always has. Even work that seems overtly formal–like Michelle Grabner’s for instance–still emits a story. Her story is one of carving out space and time to devote to an artistic life in the face of a reality that probably encouraged her (at one point or another) to quit and pursue something more practical for the good of her family. I can see that story in her work. I can see the anxiety in the obsessively handled paintings and in the domestic quality of the patterned works. I can relate to how those exercises in formal abstraction can be a departure as well as a response to being a parent with an impractical pursuit and the guilt that may accompany such a seemingly narcissistic endeavor. However, her persistence prevailed. Her hard work won out. Her relentless commitment will be her legacy.

I understand that this is my reading of her work–one aligned with the web I’m spinning–and that to Grabner, the work is probably something entirely different, and could take place under completely different conditions. Though, there is the possibility that the work is exactly what I think it is, and either way it doesn’t matter. What does matter is that her background is her foreground. That’s what we talk about. The multi-tasker. The teacher. The mother. The spouse. The writer. The curator. The entrepreneur. The artist. 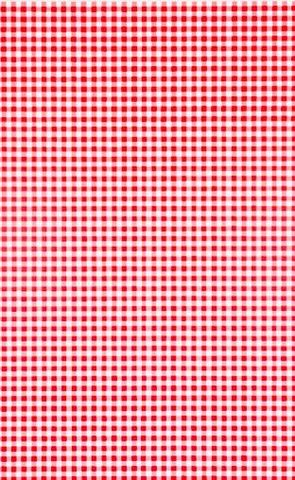 Deb Sokolow is another Chicago artist whose works seem to exude anxiety.  Sokolow, to me, is like a small mouse living in a world full of big rats–quietly maneuvering through a complicated network with great tact and professionalism. It is partly her personality, her physical stature, and friendly nature. However, it is mostly her work that makes my metaphor more real–to me anyway. She is a voyeur of grand narratives made small by her fiction. Her anxieties are amplified and delineated in humor and conjecture of grandiose scale. She seems to trust her anxieties as the stew from which she extracts and distills her stories.  It is her way of understanding the world and ultimately herself. Whether the story she tells is about some kind of conspiracy theory or a salisbury steak–for me–they are representations of anxious thoughts and of the productive possibilities that can result from mining them. 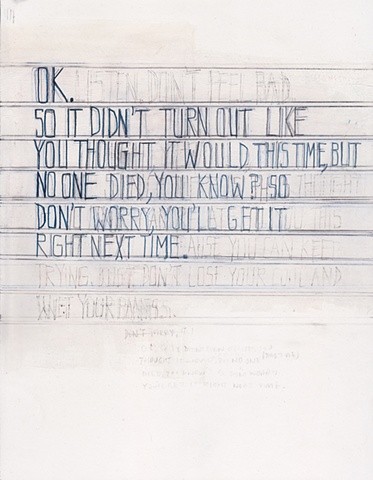 In the recent show Figurative vs Abstract, at the Hyde Park Art Center, Anne Harris–a Chicago artist and teacher at the School of the Art Institute of Chicago–exhibited a group of paintings that at first glance are a departure from the type of work that one might expect to see, given her history. Though a closer reading would suggest that this work is a sensical extension of previous paintings. Going against the grain and venturing into uncharted territory, for an established artist, can be a scary prospect. Anne Harris weighed in on this idea on her Facebook page:

Struggling with change–reaction to a death, reaction to the sense of invisibility, fear of vanishing, work unseen, me unseen. Fear that doing this will tank my career, such as it is (What the hell is she doing? Says anyone who has every expected a particular something out of me.). And if something feels risky for me, is it risky for real, or just risky in my own little world? The fear of being another woman making “modest work” (thank you for that term, Altoon), the desperate desire to be seen, respected, challenged. How much of being unseen has to do with personal reticence? How much has to do with the work? How much has to do with being a women? Voice too soft, body too soft, too small, not trained to advocate for me, no self-promotion, making “difficult work” but not up to the difficult task of defending it. Now what? 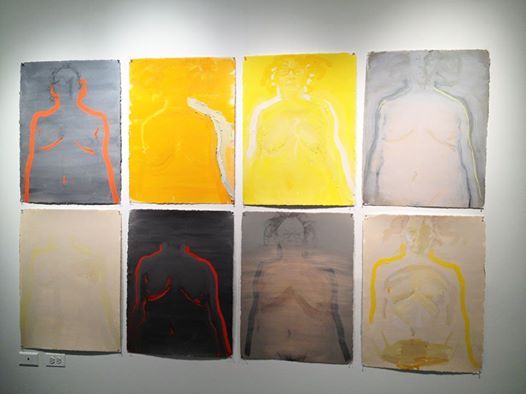 A lengthy conversation ensued, revolving around the idea of fear and anxiety in the production of art and how these traits were almost universally felt amongst those peers involved in the dialogue. In the work, Harris’ vulnerability is ever present. She is succinct. She is clear. She is anxious. I think this work is top notch. Anne Harris appears to have an incredibly introspective practice but the work is strong enough to communicate that her self-reflexivity is likely a way of life extending beyond the studio. Her work, like the work of most artists (the artists that interest me anyway) is a blueprint. A method for understanding the types of things that scare her. That make her worry. That influence the way she lives her life and ultimately makes her work.

I heard the artist Tony Cokes speak, whose production foregrounds social critique, at Boston University a few years ago and he opened his talk saying, “I am not original. I do not have original thoughts. I am not special.” He was right, in every sense of his words. His videos were so repulsively mundane that I couldn’t help but retain his message: Practicality is a construction. It is created by markets. Markets that control consumption by creating necessity. Necessity by creating beliefs. Beliefs through messages. Messages through the senses. These created necessities are consumed through every orifice of the human body–everyday for everyone. The human body is an absorbent machine–soaking up anything in range–including his videos.

I hated Tony Cokes’ work that day. It was hard for me to watch. A friend of mine that sat next to me during the lecture loved it–probably because he understood what was happening in the moment. It washed right over me like a tidal wave–drowning me with images and text. Dazzling advertisements and jarring transitions. Disjointed sound affects and miscued music. I couldn’t help the flashbacks to Stanley Kubrick’s  A Clockwork Orange’s ‘aversion therapy’ scene, where a man is forced to watch a similar video with his eyeballs clamped open. I absolutely could not take anymore–I felt assaulted by his work. I say this now, as I reconsider the work, and reevaluate its permanence in my memory. It lasted. That is rare. I not only remember it vividly, but I remembered the words that accompanied the videos. His words. “I am not original. I do not have original thoughts…” This work resonated. This work had value. I hated it and it was just as good, if not better, than so much art that I adore. 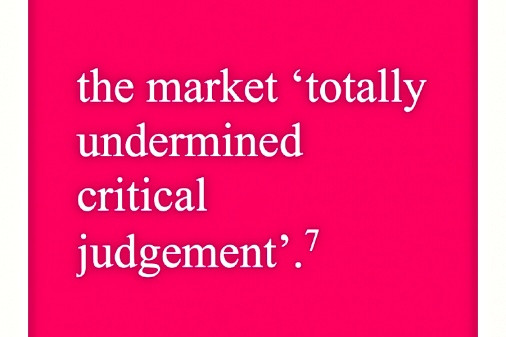 Tony Cokes, whether his intention or not, embraces our collective anxieties. He points to the systems that oppress us–that tame us. He forces us to look at those things we know about the world that we typically repress because they are either too painful or too difficult to approach. He points to the structures that limit us from reaching our boundaries. Post-modernism told us–unequivocally–that we weren’t very special at all–that our boundaries were no longer made by an internal schematic that was constantly evolving. Tony Cokes reminds us that the parameters that identify you at present, are created by systems that are beyond singular control.

Despite all of this, however, there are infinite reasons to keep plugging away–to keep producing art.  While the world grows fearful, artists are meeting anxiety–some collective anxieties–with productive reproach. They reject those fears or accept them by seeking their origin and expounding upon the energy that anxiety creates. They respond to their chosen territories by investing their lives into exploring the depths of themselves–a product of today’s world in addition to the inherited and transcendent qualities of yesterday.  Instinctually we are compelled to understand our inabilities–our flaws, our incapacities. An investigation that maps our boundaries is our intuitions telling us how to understand those faculties that ultimately aid in our survival. Creating the capability to discern between the two is our eternal calamity and our providence–if one invests their time in attempting to achieve it, despite knowing it is an impossible feat. We will not survive no matter what we know.  The point of our efforts are to grow–to learn about ourselves. The point is to learn how we exist in the world, by understanding how we make objects. The “why” of things is simply the anxiety that drives us, and the location of new ideas. It is essential–anxiety is utterly contemporary. It always will be. What is important, is the object. The object tells the tale and the tale teaches.