Sector 2337 touches down on Milwaukee Blvd

With or without a physical locale, Green Lantern Press has been a force in the Chicago art scene since Caroline Picard started to open up her loft space in Wicker Park to public exhibitions and events in 2005. GLP is responsible for the release of more than 30 titles, including Lise Haller Baggesen’s “Mothernism,” an experimental epistolary novel on motherhood which has enjoyed a sweepingly positive reception since it’s summer release. After a brief stint in France, the prolific Picard is back with a new space on the formerly derelict stretch of Milwaukee Avenue near Fullerton that now is home to, amongst other things, a luxury juice bar. Picard’s space stands out, with glorious accordion front doors that open onto Milwaukee Ave, gender neutral bathrooms with a shower (for residents only!), and a polished wood floor so shiny it’s a little hard to look at. 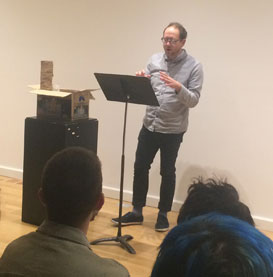 Jesse Malmed and his box of ideas, jokes and sentiments at the opening of Sector 2337.

Officially opening on October 16th, Sector 2337 started out strong with a soft opening last Thursday, October 9th, with performances by Carlos Martiel and Jesse Malmed, co-curated by Lin Hixon and Matthew Goulish’s Every house has a door. Martiel’s performance really took to heart the title of the overarching exhibition, “The New [New] Corpse”. A full house witness Martiel’s “corpses” draped in American flags across the pristine gallery floor. After a brief intermission, Malmed’s animated spoken word performance was a singular meditation on the future, technology, jokes of scale, good (including bad) ideas, inspiration and (I think) art. Afterwards, everyone shared a toast and crazy loving vibes with Sector 2337’s proprietors Devin King and Picard. 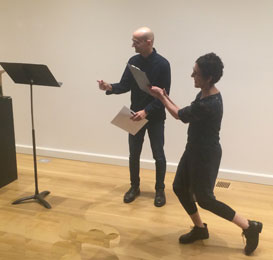 Hixon and Goulish introducing the performances and the new venue. 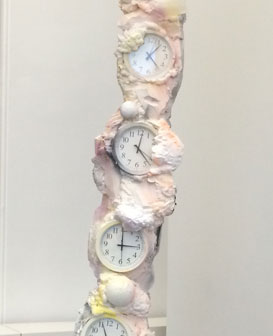 Detail of Sabina Ott’s clock column in her [so much more than an] exhibition “here and there pink melon joy” on view at the Chicago Cultural Center through January 4th of 2015. 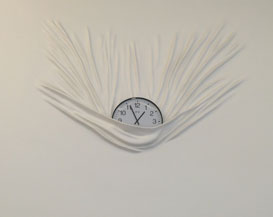 Work by Daniel Arsham at the Fashion Outlets of Chicago at Rosemont. On view indefinitely? 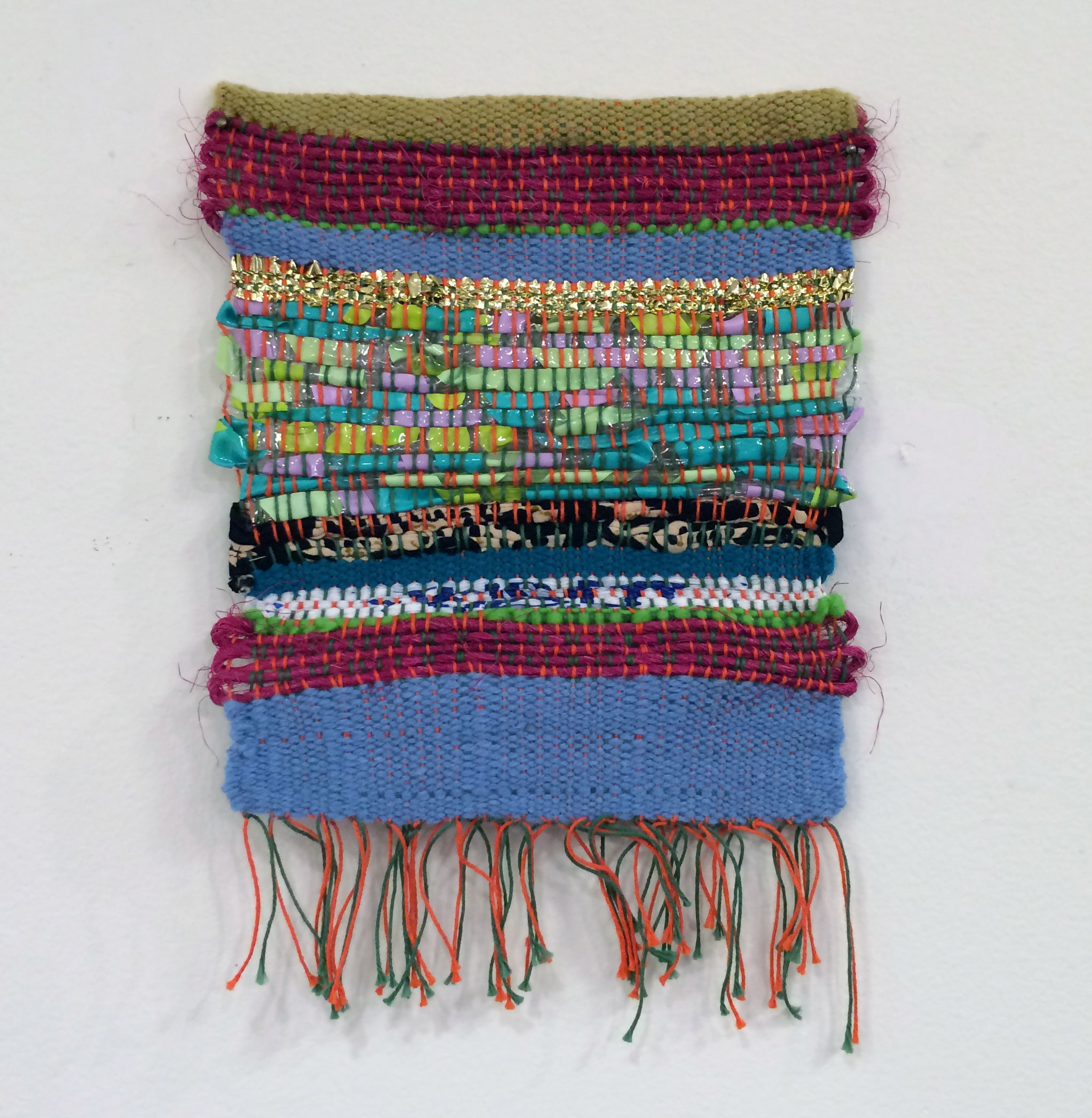 Sweater weather. Work by Victoria Martinez on display in The Condition of the Frog Is Uncertain, an experimental and collaborative art exhibit at Harold Washington College’s President’s Gallery.
Trending continued… 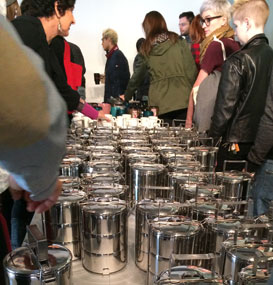 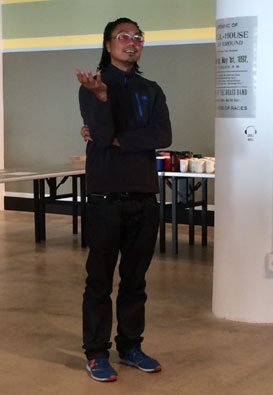 Tiravanija discussing the impetus behind his lunch project with student groups from across Chicago. 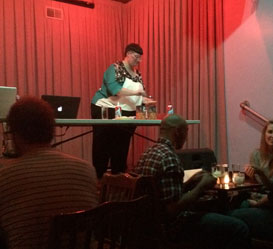 Leary serving waffles during her presentation of Karen Finley at Crimson Glow. 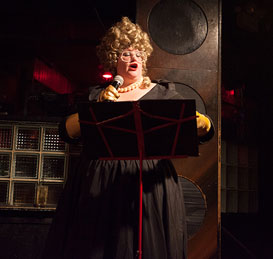 Full regalia for Gravy at Berlin. Photo by Jono Pivovar.

Header image features an image from Carlos Martiel’s powerful performance at Sector 2337 last Thursday evening. The still images on his website will blow your mind.

Roth’s Complaint: Author sues artist in absurd plot line straight out of his own novels.

Is this real life?

In 2012, Bryan Zanisnik was served a cease and desist letter from the firm that represents well-known author Philip Roth. Both artists share a love of Americana, baseball, and New Jersey (of all things). Unfortunately, the humor of Zanisnik’s silent re-performance of Roth’s The Great American Novel, was lost on the aging author.

In the aftermath of Zanisnik’s run-in with Roth’s lawyers the artist hasn’t let up, making work that is even more focused on the Roth, his paranoia and the intersection of their shared interests. In his exhibition, The Passenger, closing this Saturday at Aspect/Ratio in the West Loop, Zanisnik weaves the real life Roth and his works deeper into his production. 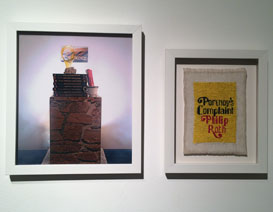 The first two pieces you see when you enter the exhibition are diptychs featuring needle points, one of Roth himself and another featuring the cover of his best seller, Portnoy’s Complaint. Each embroidery is paired with a photograph of a characteristic assemblage by the artist, each additionally refers back to Roth, with physical copies of his books placed amongst the still lives. In a way, it seems like Zanisnik has written Roth into the narrative of his own work. Baseball cards are excavated from the gallery walls, and the symbols of the over saturation of American capitalism ring out as true here as in Roth’s American Pastoral.

Cease and desist that, Roth! The Passenger is on view through October 18th at Aspect/ Ratio, 119 N Peoria, Unit 3D. Catch this gem before the only place you can see Zanisnik’s compellingly narrative obsessive compulsion is in New York museums.