And half the fun. EXPO coverage with a beyond Sunday shelf-life. 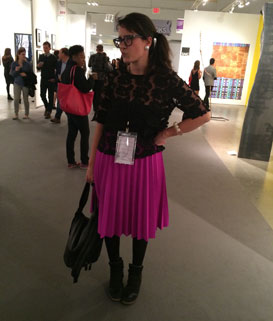 Ms Chicago Looks looking fabulous as always at the Vernissage for EXPO Chicago.

September to Remember in Chicago

The end of summer means the beginning of art exhibitions in Chicago. With the Equinox this Tuesday, summer is officially coming to a close and the Chicago community is returning to the city to roost (or at least those of us who haven’t left permanently after last winter). Like most September’s in the city, this one has been packed with openings and performances to inaugurate the fall season.

Openings across the city (as well as in Oak & Rogers Park’s) now share the month with EXPO Chicago. With it’s inaugural shine transforming into a timeworn tradition, thousands made the arduous trek across Navy Pier (in gorgeous weather no less) to take it all in. WTT? has been hard at work on the Pier Review, an in-the-flesh newspaper for fairgoers enjoyment in partnership with EXPO, ArtSlant and the home-team, Bad at Sports. This week we’re throwing up some highlights from the past month as well as a few fair favorites. Based on what we’ve seen so far, it’s gonna be a great season Chicago, we can feel it! 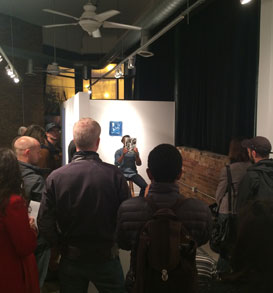 If you missed Danny Giles’ performance at Roots & Culture on September 12th we’re sorry, but you can still see go/figure, featuring work by Daniel Giles & Eliza Myrie and a fantastic essay by Meg Onli. 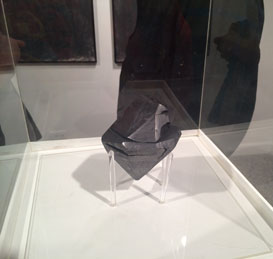 Eliza Myrie’s graphite diamond in go/figure. Based on her research on the Lesotho Brown Diamond and the woman who discovered it, Ernestine Ramoboa, Myrie used this block of graphite to create the drawings in the instillation, leaving a “diamond” of her own. 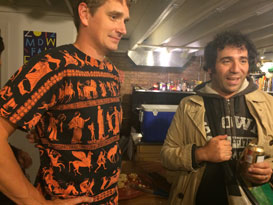 R&C’s Eric May with Michael Rakowitz at the opening for go/figure. 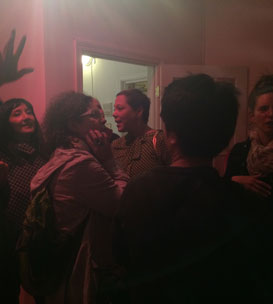 Edra Soto surrounded by friends and admirers at the opening for Say Everything at Lloyd Dobler in Wicker Park. 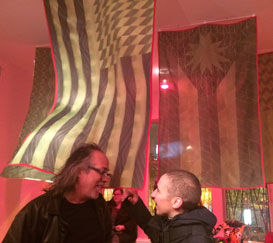 Iñigo Manglano-Ovalle and Rebecca Beachy inside of Say Everything at Lloyd Dobler on September 12th. 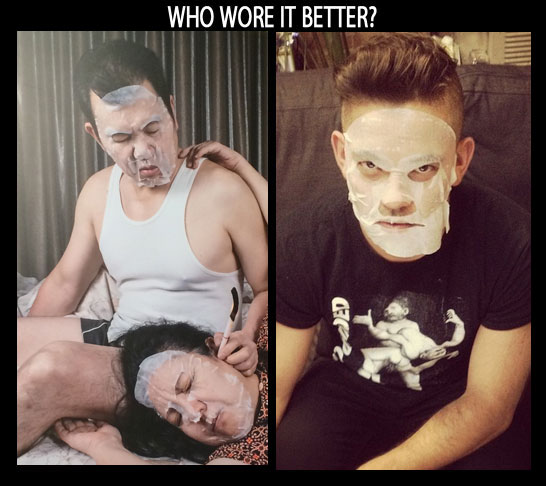 Was it this photograph entitled Mom & Dad (2014) by Leonard Suryajaya in the SAIC Expo booth curated by José Lerma or Leo Kaplan of The Hills Esthetic Center in this Instagram photo by Thorne Brandt? And what do those things do to your face anyway? 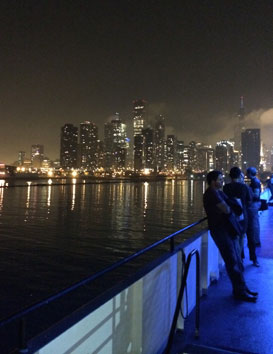 The view from the Mystic Blue on the opening night of EXPO Chicago.
T of the Town Continued… 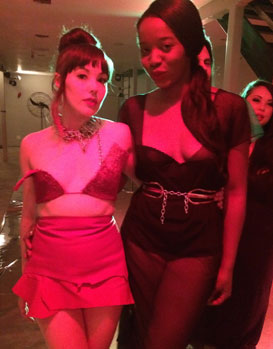 It wouldn’t be fall without a little bit of LUST, which is just what Ashley Scott brought to the exuberant performance and trunk show for her newest collection, “Drapes of Lust” at MANE Salon on the 12th. Here Scott poses with one of her models, Sarah Weis (left). 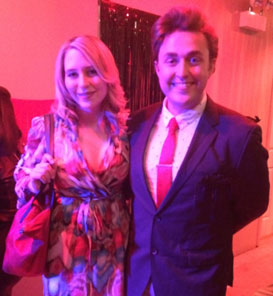 Derek Bagley with his partner, Hayley Barber, taking in the aftermath of the LUST performance at MANE Salon. 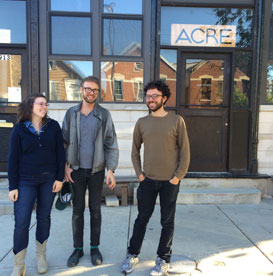 We were pleased to see Katie Hargrave, Nick Lally and Daniel Luedtke at their thoughtful exhibition, EDIT ROAD MOVIE, a musing on the classic tropes of road trips based the artists’ explorations of intentional communities on the road to the ACRE Residency in 2013. 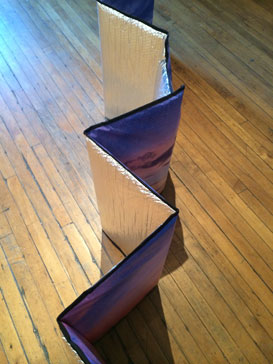 Custom car visor by Katie Hargrave. EDIT ROAD MOVIE is on view until September 29th at ACRE Projects in Pilsen. 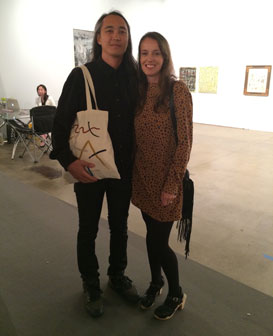 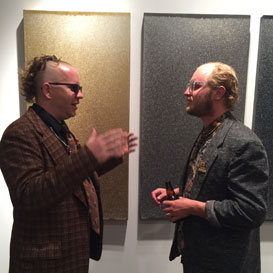 Drew Ziegler and Ryan Sullivan pulling off a little “fashion imitating art” at the Vernissage. 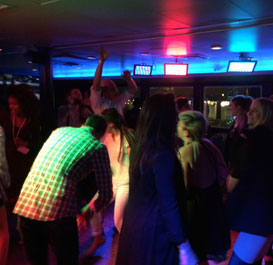 Dance party on the Mystic Blue docked at Navy Pier on Thursday night. Shout out to Vincent’s elbows!! 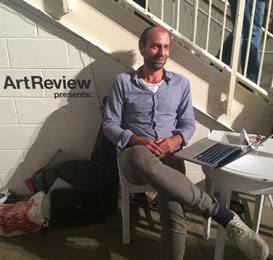 We enjoyed chatting and sharing a (clandestine) beer with Ludwig Kittinger of the Vienna collective dienstag abend at their booth sponsored by ArtReview.
EVEN MORE T around Town! 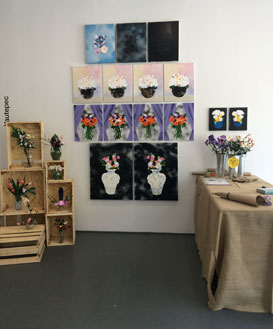 Great paintings, clever booth. Possibly our favorite showing of the entire weekend, Morgan Manduley’s flower shoppe at Yautupec Gallery in EDITION at the CAC was on point. All of the floral arrangements are painted canvas. 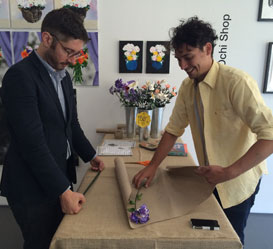 Brett Schultz of Yautupec and Manduley wrapping up one of the painted flowers at their booth. 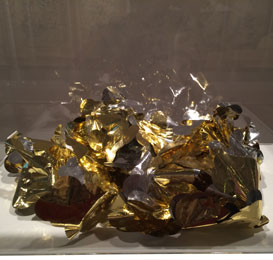 Another highlight of the weekend was slipping into the Hancock building to see RETREAT, organized by Theaster Gates in collaboration with his Black Artist Retreat (BAR). The show was really beautiful (especially the first room outside of Valerie Carberry’s main space). The work above is an artifact of a performance by Wilmer Wilson IV from 2012. 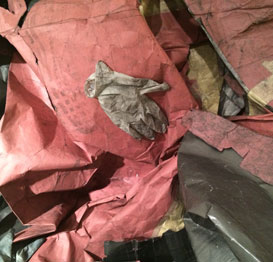 Crumbled artifacts abound at RETREAT. A detail of Tony Lewis’ Untitled (Hancock via Orchard via Oak Park via Bindery via Autumn Space), (2012-present) pairs nicely with the Wilson work. 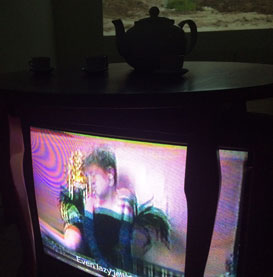 Things we can’t get over: 1. Work by Alejandro Figueredo Diaz-Perera and Cara Megan Lewis in their exhibition A Home Coming which opened last Friday night and is on view at Antena until October 11th by appointment. Above is a sculpture/ video work by Lewis. 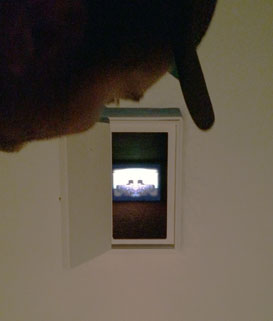 A beautifully installed and enticingly seedy piece by Alejandro Figueredo Diaz-Perera in A Home Coming that you will just have to see for yourself.

Header image features a detail of Ishtar Gate by Michael Rakowitz on view in the IN/SITU program at EXPO Chicago this past weekend. Rakowitz’s gates were fittingly (?) installed at the entrance to the VIP section of the art fair. The entire series is really amazing, read about it on Michael’s website.