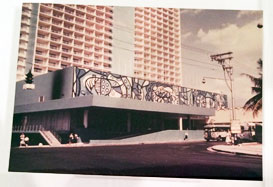 Beyond the stuffed animal selfies at PS1, LACMA and PAMM

Itâ€™s been a wild winter break, but Whatâ€™s the T? is back in Chicago in time for dibs season and motivated by the artists brave enough to exhibit in the tundra. For those of you holed up in your apartment licking the radiator for warmth (like I am), hereâ€™s a recap of some shows outside of the snow globe.â€¨

Closing next Sunday, February 2nd (with a performance by Kim Gordon), is the exhibition that’s been blowing up my feed since it opened at PS1 in October of 2013. Mike Kelley’s retrospective is a 40,000 square foot sprawling colossus of an exhibition. Although I could have lived without the seemingly endless rooms of Kandors (a reference to the miniaturized capital city of Superman’s rival Brianiac) on the first floor, the exhibition impressively filled the sprawling school house and gave me a new appreciation for the artist. 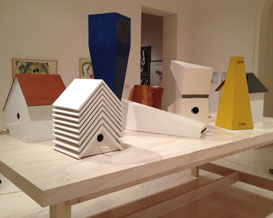 Birdhouses by Mike Kelley at PS1.

Never before in my life have I seen so many swastikas and phallus and felt pretty ok about the whole thing. Arguably the greatest mindfuck in the entire exhibition (taking up an entire floor, the cacophonous a/v installation Day is Done was a close second), Pay for Your Pleasure, a corridor of large portrait paintings and quotations from famous intellectuals effectively complicated the relationship between violence and creativity. By the time I reached the end of the corridor I had completely lost the ability to tell right from wrong. 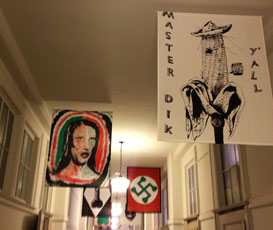 Kelley’s banners in the hallway at PS1.

The oft-posted Deodorized Central Mass With Satellites was among the least interesting rooms (also the one with the longest line). Watching people pose in front of the hulking mass of leftover toys, I wondered how Kelley himself might have felt about powerful installation’s transmutation into a selfie photo-op. I did pop a huge boner for the dysfunctional birdhouses and the artist’s drawings of his own name. Most disappointing though was PS1’s lack of snacks. The M. Wells Dinette conceptual Mike Kelley menu was admirable, but would it kill PS1 to sell a girl a croissant or fruit cup? I traveled all the way to Queens for this.

Thankfully, we missed the Turrell retrospective at the Gug (heard the lines were unbearable even if the hole was amazing) in favor of seeing the exhibition in full splendor at LACMA. Apparently the artist, an LA native, made moves to stem the line issue by limiting the amount of guests allowed through the exhibition each day (and no photos allowed!). By the time my party of 5 arrived at LACMA , the $25 exhibition was completely sold out for the day. It was only through the loophole of student membership and my lovely friend, Conor Fields, that I was even able to see the exhibition. The antidote to the packed Kelley exhibition, my first glimpse of Afrum (White), the exemplary white cube that is the first of many light installations, was as religious an art experience as I’ve ever felt. 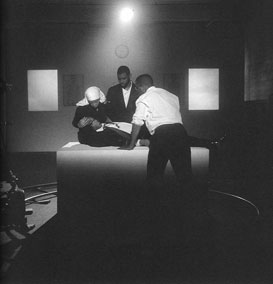 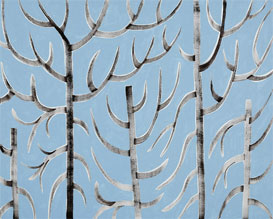 Other works, such as “Bullwinkle,” a modest projection in the shape of an antique television screen, featured plaques helpfully suggesting minimal viewing times to aid visitors in experiencing the desired effects of Turrell’s complex combinations of light and color. Guests moved leisurely through the exhibition. The immersive installations were smartly punctuated with wall-based work, such as the artistâ€™s delicate aqua-tint etchings and hologram series. Despite the 20 minute wait, the paramount moment of the exhibition was Breathing Light (2013), a absorptive environment that mindfucks you in an entirely angle than Kelley’s Pay for Your Pleasure. Heats of eight are invited to take their shoes off, don booties, and spend five minutes in the space which features rounded walls and a deeply saturated bath of LED light that slowly gradients between red and blue. Shout out to the world’s best docent, Rikki Williams, for doing an impeccable job at keeping the antsy visitors to Breathing Light in check (and for letting me stay an extra minute).

LA’s other most famous dude, Frank Ghery, also deserves a shoutout for the unbelievably well designed Calder exhibition in the same building as Breathing Light and the other (reservation only) large-scale immersive Turrell spaces. Having seen a couple of attempts of shoving a bunch of mobiles and stabiles into a large room (including the MCA’s most recent attempt), I can truthfully say I’ve never seen a better presentation of the artists work. Ghery’s specially built pedestals wind around the gallery and create niches that isolate and accommodate each piece. His specially designed walls and plinths allow the viewer to see the delicate balance present in individual works instead of a mess of primary colored circles and wires hanging everywhere. 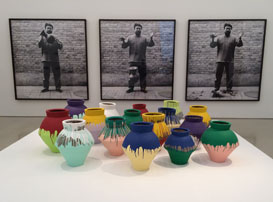 Not to be outdone by other major metropolitan areas massive surveys of mostly male work, the Perez Museum of Art Miami (still known to me as the Miami Art Museum) opened it doors in December with an inaugural retrospective by Ai Wei Wei. While the exhibition has a few highlights, I found the smaller retrospective of works by little known Cuban modernist, Amelia PelÃ¡ez, to be a far more compelling and apt exhibition for the brand new bayside contemporary art museum. 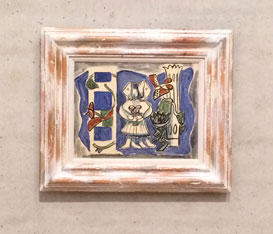 Painting by PelÃ¡ez at PAMM.

I thought the inclusion of the furniture was a little much, but I loved the objects made by PelÃ¡ez herself. Her ceramic work epitomizes the bright colors and modern, bold markings of her still-life paintings on shapely vases and cups. I would take the espresso set. The show was thoughtfully put together and I was delighted to learn of the artistâ€™s life and work. Now I just wish I could go back in time to Cuba and see her Havana Hilton Hotel mural. 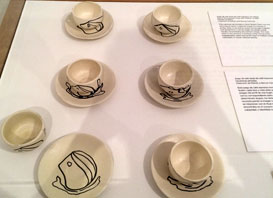 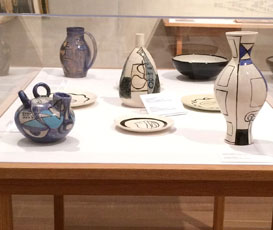 Back in Chicago, Iâ€™m waiting on my invite for what will be either the awesomest or worstest retrospective in Chicago history: David Bowie Is. Stay tuned.

Leiby in coversation with Anthony Opal at the closing of her exhibition last Sunday.