Hyperjunk: In Aaron’s Wake – What Happened to the Radical? 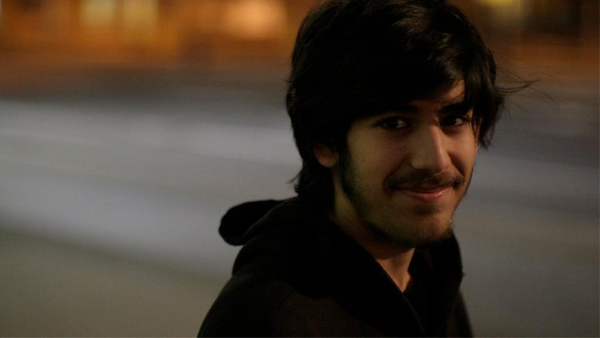 After reading about the sudden suicide of Aaron Swartz, Iâ€™ve been thinking deeply about my role as a digital artist. Swartz, a prolific computer programmer and activist ended his life after battling depression and a pending prosecution by the US Department of Justice for his intent to distribute academic texts only accessible through JSTOR. This material was taken by trespassing onto the MIT campus (Aaron attending Harvard at the time) however the prosecution charged him with counts of wire fraud, computer fraud, and obtaining information illegally through a computer â€“ charges that many feel were unwarranted and/or severe. The sentence that prosecutors pursued in this case â€“ up to 50 years of jail and a $1 million fine â€“ illustrate the growing division between those who want information to remain free and those wanting to continue the privatization of data through pay-walls and limited access. This division, as catalyzed in some way by Aaronâ€™s suicide, is rapidly approaching a point where the very notion of keeping information decentralized and open risks criminalization.

This situation – filled with grief, anger, and sorrow â€“ brings up concerns about the freedom of information. Itâ€™s important to note here that access to information does not equate with freedom of information. Computer Scientist and activist Richard Stallman once put forth a fitting analogy, saying that there is â€œfree as in freedom,â€ and then there is â€œfree as in beer.â€ In the former, freedom is a universal liberation of expression; in the latter, you are only afforded access to beer on the predication that you belong to the party. If you area stranger to the party, taking beer from the fridge is not merely be uncool, but it can easily break out into pandemonium. This nuanced line of what constitutes â€œfreeâ€ is precisely the fine line that Aaron and others digital activists tread.

As I said initially, in the wake of Aaronâ€™s widely publicized suicide, Iâ€™ve been thinking considerably about the state of digital rebellion and electronic civil disobedience amongst the makers that have recently become closely associated with art online. Itâ€™s important to note that many notable figures within the new media and net art community have spoken out about the implications of Aaronâ€™s prosecution and suicide. However, besides the occasional prank or gimmick, I found it hard to come up with many young artists that were tackling digital politics head on. I know that many within that community have sought, in one way or another, to comment on the state of digital distribution with regards to authorship and appropriation, but few seem up for the task of talking directly about the ways in which the web is changing for the worse. 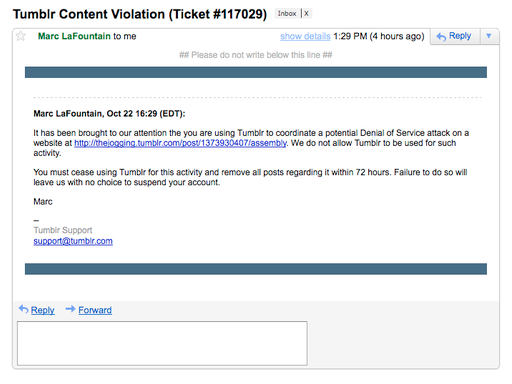 Documentation of The Jogging’s ASSEMBLY project

The Joggingâ€™s Distributed Denial of Service (DDoS) project ASSEMBLY in 2010, which polled users on what site they should shut down, was criticized by many as an act of feigned martyrdom after their Tumblr was shut down (which has since been reopened). Scott Kildall and Nathaniel Stern attempted multiple variations of internal subversion in their Wikipedia Art project in 2009, only to be quickly asked to cease and desist and later threatened with legal documents that were eventually defended by the Electronic Frontier Foundation (EFF). Artie Veirkantâ€™s Real Proper asks questions of piracy and the standards of distribution that occur within p2p networks, but again the work does not necessarily take a stance on how the illegal access to copies of Hollywood cinema inform a digital art practice. Although Iâ€™m sure that Iâ€™m overlooking some projects, it seems that just until recently artists were at least entertaining the idea of digital protest and radicalism. Now, however, The Jogging (for example) seems little more than a branding engine to fuel Brad Troemelâ€™s etsy page.

This is not to say that The Jogging, or any digital artist really, should be faulted or put under the microscope for wanting to pursue a viable commercial career. Perhaps more to the point, itâ€™s important to articulate that the pursuit of economic sustainability as a digital artists does not inherently fly in the face of radicalism or political activity. This being said, I might be looking too intently for a clearer expression of a political stance from artists, contemporaries, and myself. Â The vagueness of the politics of contemporary digital media â€“ generally leaning left and in support of the freedom of information â€“ marks the medium with a sense of apathy, or else opportunism. Or at least this is a fear within my own work.

This is not to say that the field is completely void of radical activity. 0-Day Art, maintained by Don Miller and Jeremiah Johnson, copy and redistribute â€œnet art taken offlineâ€ through p2p torrents. Through copying and rehosting privately distributed work like Rhizomeâ€™s The Download, the duo explicitly relocates work back into a public distribution network in an effort to weaken the commodification of that artwork. This gesture not only subverts private institutionalization of digital media, but also questions the need for art online to abide by traditional art market principles like scarcity and collectability. Although their work has generated several conversations regarding the efficacy of redistributing work without the consent of the artists â€“ and whether this gesture critiques institutions or the artists themselves â€“ the spark that 0-Day Art ignites comes from a fire familiar to Aaronâ€™s torch.

Certainly, the art world is not oblivious to Aaronâ€™s death as evidenced by the outcry of support for his cause by many notable net-publishing outlets with equally notable guest columnists. I am surprised, however, that notions of radicalism, digital protest, and hacktivism havenâ€™t been more prevalent in the contemporary discourse of art online. With all the concern around net artâ€™s ability to mature into a gallery viable medium, Iâ€™m left wondering how the rapid commercialization of art online â€“ itself a reflection of the increasing commodification of data â€“ might estrange the medium from its radical roots.

Looking at mid 90s or early 00s work by JODI.org or Eva and Franco Mattes, a strong political message repeatedly occurs. Works like Biennale.py and Mongrelâ€™s hack of the Tate Modernâ€™s site positioned digital art as a medium that not only challenged contemporary art conventions, but also a the larger political infrastructure that supported those institutional models. Tactics like flame-wars, and list-serv spam-bombing are all now completely passÃ©. This once popular and aggressive tactic employed by Netochka Nezvanova on many VJ forums at the turn of the century is now nothing more than twitter cattiness or comment spam. This history, sadly, seems lost to many emerging digital practitioners; a community all too willing to site Marshall McLuhan or Walter Benjamin, but unwilling to look at immediate predecessors. In other words, trolling has gone â€œmainstream.â€

Much as the educator in me would like to imagine, history lessons wonâ€™t suffice in moving contemporary digital practice toward a location of radicalism. A critical reengagement of the material of our tools seems to be a more worthwhile endeavor. The ways in which we use software and hardware to create cultural material speak volumes about the intention of the maker and the willingness of that individual to take a stance against the material of monoculture. Instead of celebrating the access of iDevices for making pretty drawings and using monoculture social media as an artificial performance platform, an investment in progressive alternatives might be in order. To this end, I know few artists that use opensource software, build their own computers, or at the very least release their work under Creative Commons. Iâ€™ll reproach myself slightly for positioning this as some kind of merit badge of nerdiness. But the fact remains that the ease of piracy and/or pilfering volume licenses from academia have an effect on the way that these tools get used.

Whatever potential for subversion that might occur in using mass-market software is subsumed by the software rigidity. Iâ€™m constantly surprised by my own willingness to agree to End User License Agreements that I know full well compromise my freedom. This agreement not only constrains creative potential, it also dictates a specific aesthetic. Digital artists using excessive drop-shadow in Photoshop, or crowd-sourced models from Google SketchUp, turns into a convenient visual style. It seems as if the cultural capital that net art has coveted so consciously is slowly losing its metaphorical gold standard. In other words, because of the aesthetic motivations behind a potential subversion, the intention of the artist becomes clouded. When look becomes primary and content becomes secondary the potential for political activation becomes lost.

Perhaps the immediacy of creative tools has rendered critical inquiry into the need for those tools as insignificant (or moot). Instead tools are taken for granted, and as a result this entitlement breeds a homogenous aesthetic. For example, instead of figuring out how to modify, hack, or renegotiate available technology (i.e. an obsolete printer or gaming console), contemporary artists can simply pirate the latest version of ZBrush. Again, issues of access seem integral in refamiliarizing ourselves with a radical vernacular. What happens to the content of our media when we can pirate any software we need? What happens to our culture when open-source options seem alien or only for those with computer science degrees?

Perhaps, what Iâ€™m observing is a desire in contemporary net-based practices to diverge away from a hacker ethic that once informed a previous generation of new media artists. In some ways, 0-Day Art embodies a unique creative intersection between hacker culture and contemporary net art. As a result of this divergence, there is a noticeable political division between those interested in DEF CON and those going to Art Basel. The dwindling overlap between these potential communities has either migrated offline completely or gone into other fields (game development, e-journalism, music, etc.).

But why? Is the conflict here merely financial, or is there inherently an ideological divide between digital activism and digital creativity? The willingness of net-based practitioners to champion the flexibility and openness of the web must come also with a willingness to defend that openness at the cost of personal gain and/or success in the art world.

Itâ€™s clear that the impact of Aaronâ€™s death is reaching far and wide to many different types of free information advocates, but to what extent his suicide will effect contemporary net art is still uncertain (if at all).Â  My hope is that Aaronâ€™s sudden death, again tragic and profoundly dire, will inspire others to continue in his wake. I especially hope that this happens within the arts – where the debate of property, distribution, access, and potential profitability continue to create contentions and rifts amongst what once appeared to be a tight community of peers.