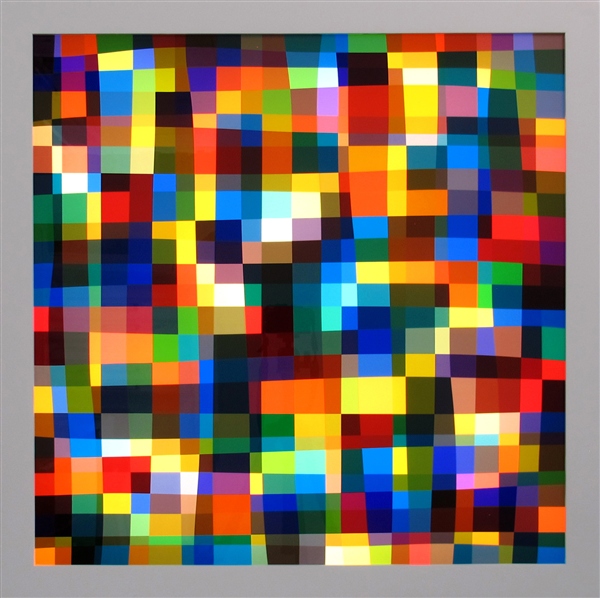 This week: Duncan and Richard talk to Spencer Finch about his current exhibition “Study for Disappearance” at the Rhona Hoffman Gallery.

What is the color of the threshold – of that liminal space before day plunges into night? Spencer Finch attempts to answer this question through his most recent body of work created specifically for Study for Disappearance, his fourth solo exhibition at Rhona Hoffman Gallery. Each watercolor diptych in this new series individually renders violet, blue, green, yellow, orange, and red as they appear on objects in his Brooklyn studio. On one side of each diptych, Finch has labeled the swatches of varying hues of a single color according to the object that bears them: â€œcandle,â€ â€œbrick sample (Baltimore),â€ and â€œbull-fighting posterâ€ to name a few. This study is paired with that of the identical collection of objects observed as the colors shift to grayscale with the dimming daylight. Slowing down the viewerâ€™s process of seeing, Finch guides us through the nuances of the fading light and the stages of visual perception. Accompanying the watercolor diptychs is a new light box piece, Color Test 600, comprised of various multicolored squares layered together to create an abstract study of darkness.

The ephemeral light of dusk is a seductive territory for Finch and such fleeting scenarios fuel his artistic process. Artworks such as the light installations West (Sunset in My Motel Room, Monument Valley, January 26, 2007, 5:36 â€“ 6:06 PM) and Dusk (Hudson River Valley, October 30, 2005) have transported the light quality of a specific place during that transitory magic hour to the setting of art galleries and museums worldwide. Once again, for Study for Disappearance, Finch has succeeded in blending scientific method with a poetic sensibility to both record the light and color of the physical world and simultaneously explore the intangible and ethereal essence of a place. This time, Finch generously offers an intimate look at the enchanted and often confidential space of the artistâ€™s studio.