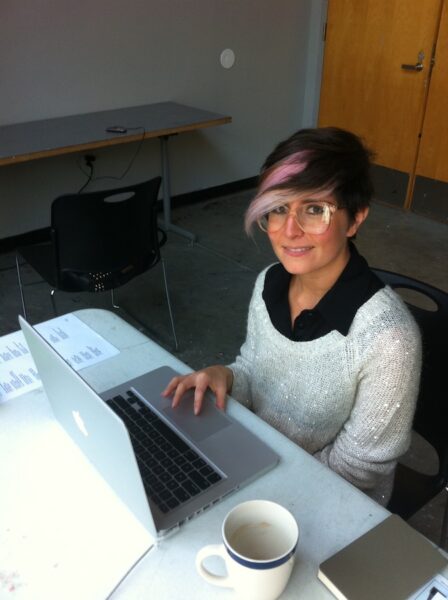 This week: BAS on the west coast! We talk to Adriana Salazar and John Spiak, director and chief curator of the Grand Central Art Center, which has an exhibition of Adriana’s work up currently. Also, we talk to Sabina Ott about The Terrain Exhibitions Biennial which is this coming weekend!
Plan your life around seeing us at EXPO!!! You know you want to.

Is there an end to our existence? Can we be separated from our bodies and be transformed into something else? Adriana Salazar’s work has continued to revolve around these questions in different ways. This is why the realm of mortuary customs appeals to her: it presents numerous ways to approach the ultimate unknown.

Her past series of works have attempted to bring inanimate objects to life; crystalize human actions into mechanical devices; worked to blur the line that separates the natural and the artificial. Death has been an ever-present part of her work, understood in a broader sense, in her own words, “I want to address death as a dare to the certainties of knowledge, and as a challenge to deeply rooted traditions. Thus, my work has taken its course transforming mechanical actions, obsolete objects, fading plants and passing life into installations and objects that could become questioning situations themselves.”

For this current series, created during a two-month residency at Grand Central Art Center, the artist desired to go deeper into that moment of transition between life and death, finding out as much as she could about what happens with our bodies, with our consciousness and with everything we build around the death of others. In her words, “I found, amongst other things, that there is an aesthetics of transition, that there are rituals trying to maintain life after death, and laws which govern our bodies, even when we are not fully present. I also found out that there are transitional techniques and an intricate industry around them.”

Some of these techniques of transition have the purpose of dematerializing the body – its physical presence, associated to life and its impermanence – replacing it with a different kind of immaterial presence. In the crematory, a compartment ignites at a very high temperature until the body is almost entirely dissolved. In order to secure the transparency of this transition, all particles of bone are carefully separated from any other solid object that might exist in our remains. These foreign bodies – implants, replacements, metal bodily parts, and every sign of our artificial self – must be removed. All that is left are bones, which are then reduced to the size of grains of sand. These remains are kept in homes, spread at symbolic locations, interned at traditional burials site, or used in other creative manners. The artificial parts, on the other hand, are usually recycled for their metals or tossed away.

Salazar has decided to rescue as many cremated artificial body parts possible. These parts remain as solid as they were inside their bodies and are nevertheless considered residue. She found their value in this very ambiguity. They embody the question of the status of our own existence on a physical level: their materiality creates confusion between those objects as parts of a physical body and our own body, thus opening the gap between our certainties and uncertainties, beyond the matter of human death itself.

Opening Block Party:Â
Terrain artist Claire Ashley will produce an event featuring her inflatable sculptures. Ellen Butler, neighbor, will exhibit her paintings and Elizabeth Rexfordâ€™s The Harmonia Quartet will play on the Longfellow Elementary school steps. A reading from Ames Hawkins’Â Paper VioletsÂ will be performed in addition to Paul Hertz conducting the interactive â€œIgnotus the Mageâ€ at intervals throughout the afternoon. There will be a plethora of activities and constructive projects for the whole family, such as bookbinding, fluxkit exchanges, Exquisite Corpse drawing games, and a chance for all to participate in creating a surrealist poem imagined by Stephanie Barber. The Taco Bernardo Food Truck will be in Oak Park serving dinner from 5:30 â€“ 8:00PM, an assortment of treats will be provided by neighbors and all are welcome to add to the potluck! The dayâ€™s activities will be accompanied by the DJ styles of Rae Chardonnay then followed by neighbor Ryan Todd’s band Officer Friendly. Terrain artist and Director of Aspect Ratio Gallery, Jefferson Godard, will wrap up the event with a curated video program that will be shown from dusk until 10PM.