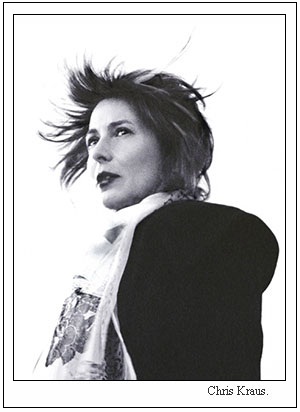 This week: While at CAA Duncan was up to some funny business in his hotel room. No, no, not that, he was (with the assistance of the talentedÂ Anthea Black)Â interviewing the multi-talented author, filmmaker, Chris Kraus.

Kraus spent her childhood in Connecticut and New Zealand. After obtaining a BA at a young age from Victoria University of Wellington, New Zealand, Kraus worked as a journalist for five years, and then moved to New York. Part of the city’s then-burgeoning art scene, Kraus made films and video art and staged performances and plays at many venues. In the late 1970s she was a member of The Artists Project, a City-funded public service venture of painters, poets, writers, filmmakers and dancers.

Kraus continued to make films through the mid 1990s. Since 2007 Chris Kraus is a professor of film at European Graduate School in Saas-Fee, Switzerland.Â She now lives in Los Angeles.