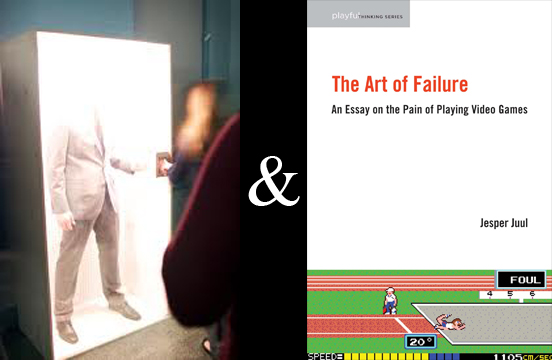 This is a show for the ages.

JesperÂ JuulÂ is an assistant professor at the New York University Game Center. He has been working with the development of video game theory since the late 1990’s. His publications includeÂ Half-RealÂ on video game theory, andÂ A Casual RevolutionÂ on how puzzle games, music games, and the Nintendo Wii brought video games to a new audience. He maintains the blog The Ludologist on “game research and other important things”. His most recent book isÂ The Art of Failure: An Essay on the Pain of playing Video Games.Â http://www.jesperjuul.net

Oliver Warden (b. 1971, Cleveland, Ohio) is a multidisciplinary artist, working both in the realms of contemporary art and technology. When online, he goes as his avatar name, ROBOTBIGFOOT. The majority of his body of work is inspired by and culled from his experiences in the virtual world, as he spends about 40 hours a week inside the realms of Counter-Strike, Left 4 Dead, and various independent titles. It can be said that Warden essentially, and by 21stÂ Century definition, lives in two worlds: online and off. His paintings, ranging in size of 1 ft to 21 ft canvases, are made by a unique process of pouring Galkyd onto canvas laid horizontally in his Bushwick studio. The semi-transparent and glossy layers build over each other in intricate and elaborate geographies, creating an effects-driven and technologically mediated super-world. HisÂ cameraless-photographyÂ is created on his computer, in virtual spaces. One series that I find especially innovative shows the â€œedge of worldâ€ in the video game Tribes; Warden literally played the game until there were no more challenges or objectives to complete, and after reaching the literal end of the map (where the playable area stops), he took thousands of screen shots. The results are works on paper, presented as pixelated photographs.Â  His performance pieces are the third factor of his work, creating a complete balanced and intentional body. Inspired by his interactive experiences, he built a body of work around notions of privacy, voyeurship and control.Â  Stalking people in Central Park at midnight and â€œcapturingâ€ them on video, living in a school wall for a week and pulling covert ops at night and sittingÂ insideÂ a chair as unknowing sitters sat on his lap, all challenged and occasionally broke the rules of engagement and participation.