MCA programming edgier than a basement party in Pilsen

THE MCA IS OOC

In her recent AFC review, Robin Deluzen wrote that the MCA is “on a roll” and What’s the T? couldn’t agree more.

This Tuesday will mark the opening of Jason Lazurus’ much anticipated and hotly discussed 12×12 BMO Harris Bank Chicago Works Exhibition. The exhibition appears to actually be three in one and has more programming than Michigan Avenue has drunk people on St. Patricks Day. The schedule includes (but is not limited to) signs for strolling, piano performances, a gif film screening (April 18th at Gene Siskel Film Center/ Conversations the Edge), and sign-making tutorials. The exhibition(s) and performances will be on view through June 18th.

Next Tuesday, March 26th, Chicago’s White/Light will be performing with [freaking] Kim Gordon. The only thing more exciting would be a Sonic Youth secret reunion show, but WTT? isn’t complaining. Tickets are free (!), but space is limited. Get our your camping gear out, this will be one for the ages.

As if all that and a bag of chips wasn’t enough, Oak Park natives, Tavi Gevinson and Jonah Ansell will be at the museum on April 23rd to discuss their work on the animated short, Cadaver. No offense Jonah Ansell, but OMG TAVI! The event includes a screening of the short and a discussion with Gevinson and Ansell moderated by Heidi Reitmaier, the MCA’s Beatrice C. Mayer Director of Education.

Something other than an opening

If you’ve ever walked by The Mutiny, you’ve probably noticed the “Bands Wanted” notice prominently displayed in their front window. If you’ve ever actually been inside the Fullerton Ave bar, you probably know why.

Regardless, a consortium of artists from The Hills to The West Pilsen Sculpture Garden have somehow managed to further expand their practices and are now “with the band, man.” The innocuously named “Chicago Music CDs showcase / CD release party” promises to be a glorious happening of music and stuff. 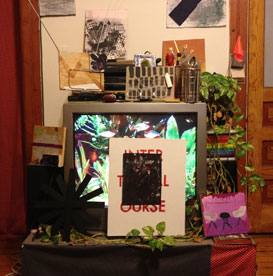 Show was worth the trek to Bridgeport. His practice invigorates others and that’s what’s important.

Header image is a detail shot of Heather Mekkelson‘s recent installation at +medicine cabinet in Bridgeport, near Sofa King. 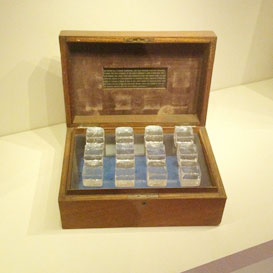 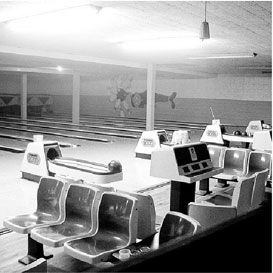 â€˜Over the lineâ€™ and â€˜Hey motherfucker, weâ€™re that Spic bandâ€™ arenâ€™t two expressions you might simultaneously hear unless you like The Big Lebowski and Los Crudos. But you may have heard it at some point in the 1990s while bowling your mediocre 104, eating a pizza and watching an iconic hardcore punk show at Fireside Bowl. Seldom do you get the productive slippage between national slacker pastime and radical teenage angst that would have been a mainstay at Fireside. This modern gem modularly clad in red-and-white metal tile faÃ§ade, symmetrically planned with bowling on one end and horizontal circulation on the other, activating corner spaces where the action happened â€“ stage left and bar right â€“ looks more like a Firestone than a punk bowling alley. 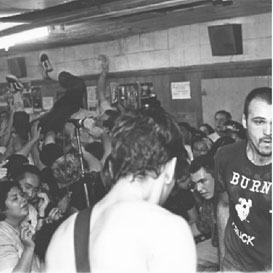 Beginning with its 40 ft signage that is part pop-advertising, part surrealist call-to-bowl, Firesideâ€™s modernism plays out in typical plan, allowing basic front-to-back bowling to occur next to stage dives, dog piles and circle pits in a circulatory space no wider than 15 ft â€“ folding slow-paced sport and high-energy hardcore into the same form. Sporting seedy bar dÃ©cor and MS-DOS-like scoring machines, Firesideâ€™s ability to transport you to a time you never experienced is uncanny. Built in the 1940s, no doubt typified by modernist aesthetic leanings, Fireside is a monument to simplicity of a pre-digital era, where you couldâ€™ve killed two birds â€“ bowling and slamdancing â€“ with one roll. 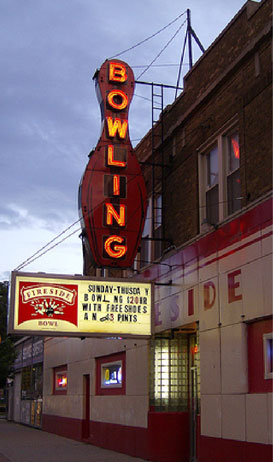 Fireside still has shows, although not as iconic or plentiful as this show list from the mid 90s. Take a gander, go to Logan Square and be a shitty bowler, while this building still exists between eras, pastimes and subcultures, easily annihilating any validity to cosmic bowling. 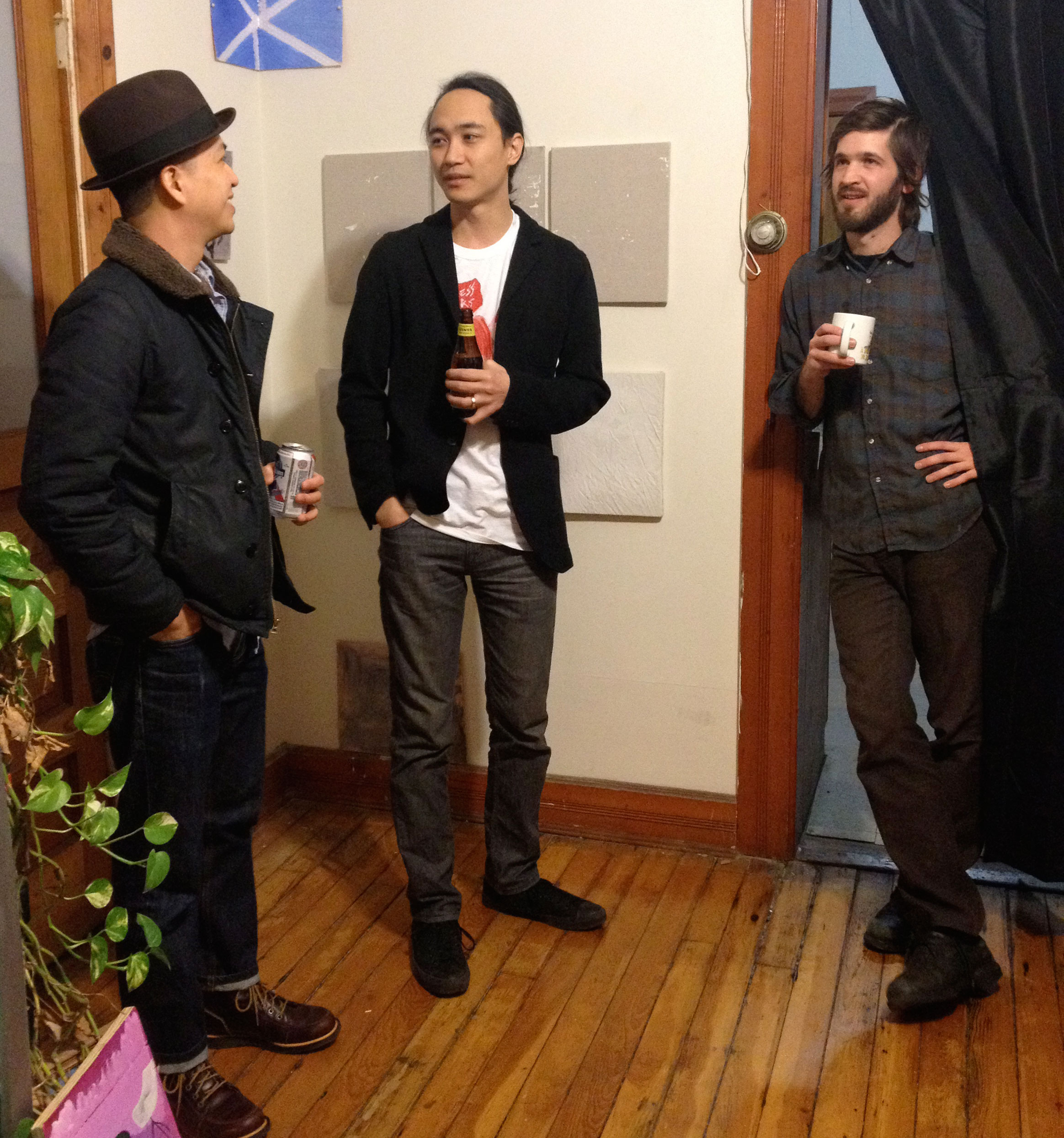 Alvendia and Sofa King proprietor Christopher Smith speaking with a visotor at the opening. 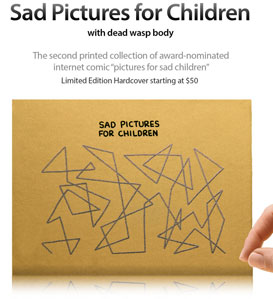 Comfort Station regains will to comfort

The much-beloved Logan Square Comfort Station is much-missed during the winter months when the tiny art shelter is too cold to host their usually full schedule of exhibitions, screenings and musical performances. As a result of actual community effort, the 1915 structure is embarking on a much needed and environmentally friendly weatherproofing, funded in part by a Kickstarter and in-partnership with Logan Square business, Biofoam, a sustainable insulation company. Not only will the Comfort Station get a physical makeover, their programming returns on Saturday, April 6th* with the exhibition “Sounds from the second floor: Isak Applin and Adam Ekberg”. What’s the T? has also heard rumors of a brand new website and more new programs for the Station’s 2013 Season.

Comfort Station Logan Square has impressively reached their Kickstarter goal with over a week to go, but if you donate now you still have a chance to get the most Logan of Squares tote bag possible and your name on a list alongside Chicago art luminaries and trendsetters (this reporter included).

* Which is, thankfully, not in conflict with the April 7th two-hour Mad Men Season 6 premiere.