A Conversation with the Matt Glass and Jordan Wayne Long, the Creators of Half Cut Tea A recent trip through LA gave me the opportunity to catch up with Matt Glass and Jordan Wayne Long, the two collaborators behind Half Cut Tea, an ongoing documentary video series featuring emerging artists across the US. Now in its second season, Half Cut Tea has traveled from Boston to Los Angeles and many cities in between, featuring soon-to-be-known artists including Jennifer Catron and Paul Outlaw (New York), Wesley Taylor (Detroit), Beverly Fre$h (Chicago), and Sean Joseph Patrick Carney (Portland). Both Glass and Long have temporarily suspended their individual art making to pursue this collaborative endeavor, which they plan to continue into a third season and beyond. Their motivation is two-fold: firstly, to bring visibility to a generation of younger makers who often are operating outside of traditional art centers; and secondly, to demystify the idea of the professional artist as an unattainable Ã¼ber-genius. Half Cut Tea brings a bit of day-to-day reality to the processes of art making, pursuing artists in their everyday habitats, which, in Glass and Longâ€™s experience, can include calcite mines and jumping out of planes in parachutes. According to Long, the project wonâ€™t end until art making is perceived as an accessible occupation, unencumbered by the exclusivity and mind-numbing static of contemporary art speak.

I spoke with Half Cut Tea in their Culver City studio, which doubles as Pretty Gallery. 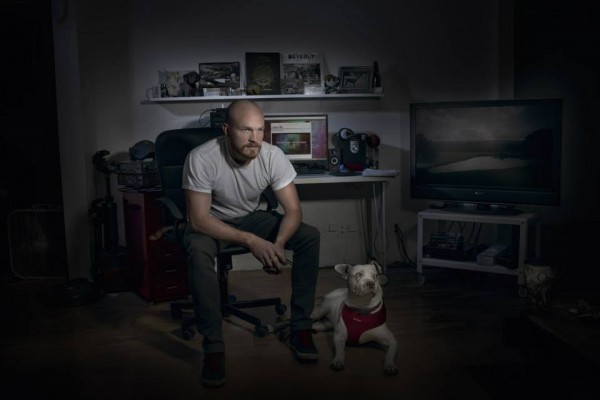 Sarah Margolis-Pineo: What motivated you to put your individual art practices on holdâ€”somewhat on holdâ€”to collaborate on a series of documentary videos, which are a distinct derivation from your creative work?

Matt Glass: For me, Iâ€™m still using the same skills. Whether or not Iâ€™m actively making art, Iâ€™m still exercising those muscles. Especially with creating the music, the videos have really allowed me to build and expand on what I already do as an artist.

Jordan Wayne Long: I think, for me, being in the art world for a couple years doing performance art, I saw so many people making work who werenâ€™t getting exposure. Maybe they werenâ€™t making the best connections or meeting the right people. Regardless, this video series allows us to make something awesome for little known artists and show that theyâ€™re as good or potentially better than those recognized by the mainstream art world. Also, when we started the series we had just came out of grad school and were so sick of art-speak. In mainstream art writing everyone just says the same damn thing! Just talking with people opens them up less formally. Weâ€™ll shoot two hours of interview for a three-minute video, pulling out dialog that really gets to the heart of what theyâ€™re doing.

MG: They say more about their art when theyâ€™re not talking about it.

SMP: What is your relationship as collaborators?

JWL: Weâ€™ve been friends since grad school, but I knew of the work Matt was doing even before that point and how crazily talented he is. He did so much work â€“ so many things for people â€“ and heâ€™s never gotten any credit for it. I am just thrilled that this series gives Matt a venue to exercise his skill and talent. Itâ€™s just crazy that just the two of us are doing this project, and so much of it relies on Matt.

MG: Thatâ€™s very kind of you.

JWL: We were both in bands before and have been on tour, so we are both accustomed to dealing with different personalities. We work really well together. Even when we get frustrated â€“ when something doesnâ€™t go right and weâ€™ve had a bad shoot day â€“ we both know when the other person needs to blow off some steam by being absolutely ridiculous. Weâ€™ll be in the car singing in different voices and then be fine 30-minutes later. Itâ€™s terrible doing something that you really enjoy and itâ€™s going poorly.

MG: Every video we make, thereâ€™s always a point that I think: This sucks! I donâ€™t want to do this anymore. But then itâ€™s always fine.

SMP: How are you selecting the artists to feature?

JWL: When we first started, it was people we had already met. From there, the initial interviewees would know someone, so it was a rhizomic growth process. Now, we get sent submissions by colleagues or from artists themselves, and often, weâ€™ll seek out particular artists that weâ€™d like to feature as part of the series â€“ a puppeteer in Venice Beach, for example.

We donâ€™t make money doing this, so if weâ€™re going to create a video, we have to really like the artist that weâ€™re featuring. Each subject is heavily vetted. We have conversations by phone, over a meal â€“ multiple times â€“ just to make sure theyâ€™re not an asshole. Weâ€™ve definitely had to turn a few people down.

SMP: What are your main considerations when producing the content?

JWL: We know we want to see each artist working. To be honest: the only thing that we ask for is that he/she/they do something that doesnâ€™t involve their art. When we shoot, we always want to do something entirely unrelated to art making, whether it be cliff jumping, playing Dominion, or playing with their dog.

SMP: Is this a way to expand the conversation beyond an artistâ€™s professional identity? Why is this an important emphasis for the series?

JWL: In grad school, our mentor really wanted us to cultivate who we areâ€”our public personasâ€”as a means of developing our careers. I was cast as a soft-spoken, Southern performance artist. Iâ€™m not going to live my life hoping that this myth of my personality will take off. I just donâ€™t think you have to fake this myth, hiding parts of yourself to embody some sort of monolithic identity. Part of Half Cut Tea is showing that people are just people. Itâ€™s not about putting artists on a pedestal, itâ€™s about showing that professional art making is an attainable, everyday thing. Any kid from any small town can be an artistâ€”there are so many different ways to be creative and be successful. If you donâ€™t come from a lineage of artists, thatâ€™s a difficult thing to understand.

SMP: So Matt, it seems as though Jordan is really intent on shaping the diological content of the films, but Iâ€™m guessing youâ€™re the one who is behind the visual content. What are your main considerations when approaching each new project?

MG: Jordan is in charge of talking about the art, and Iâ€™m in charge of showing about the art. I like the quiet moments. This is something it took us a video or two for us to learn: there have to be some quiet moments. Some of my favorite clips are when you have a nice music queue and an artist is just carrying a box somewhere. Itâ€™s in these short scenes that youâ€™re really let in on the process. The verbal interviews are one way to get at an artistâ€™s thinking, but itâ€™s in the quiet moments that you can see the wheels turningâ€”you can see the artist really considering their art.

JWL: Itâ€™s really funny. Weâ€™ll shoot for an hour and a half doing a formal interview, and as soon as Matt turns his camera and begin to shoot b-roll, the good audio will begin to flow. As soon as I say â€œI think weâ€™re good,â€ the artist begins saying what we were hoping theyâ€™d say the whole time â€“ the guard is put down. Everyone is so afraid of looking bad on camera. Weâ€™re not doing this to fuck with people; weâ€™re doing this to create documents that truly capture an artistâ€™s work.

SMP: The music seems really integral to the visual/aural texture of each video. How is it composed?

MG: I try to use instruments that match the videos and type of art that each individual is making. For example, the Nick [Olson] and Lilah [Horwitz] video features a lot of acoustic guitar, hurdy-gurdy, and violin. In a video we did recently, I put in more electronic elements than usual because the artist deals with mechanics â€“ heâ€™s an inventor.

Sometimes, I go over the top. With each video, I like to create sound that would convey the same narrative arc even if there was no actual interview. There are distinct ups and downs. In a way, itâ€™s like a 5-minute film score.

SMP: Where has the journey of this project taken you geographically?

JWL: We hitâ€¦ How many states did we hit?

JWL: One of the main things was going outside of traditional art hubs and find people who are doing great stuff..

SMP: Iâ€™m guessing youâ€™ve had a number of adventures through this project. Anything particularly memorable?

JWL: The cave. Matt was not a fan of the cave. We went and broke into calcite mine â€“ that was cool. And, obviously, we only used 30-seconds of footage, but we shot for a couple hors in that mine. Matt only went about 100-feet in.

MG: I waited for the earthquake outside.

JWL: What about the time we dodged dozens of tornados? All the way from West Virginia to Detroit, we were avoiding a crazy storm system. We had to wait part of it out in an Olive Garden. Thank god for breadsticks.

SMP: Now that youâ€™re finishing up season two, are there plans for season three?

JWL: Itâ€™s in preproduction. Weâ€™re still locating artists, mapping the regions weâ€™d like to travel to, and locating funding. Iâ€™d like to do the Deep South, and Iâ€™m trying to convince Matt to go overseas.

MG: But I donâ€™t even want to go to Florida.

SMP: How are you promoting your work?

JWL: We have a budget of about $40/month. Itâ€™s pretty cool to be able to reach the audience that we have. We have about 250,000 hits for the whole season, which is impressive considering the budget. Weâ€™re taking the grass roots approach. We pick our markets; for example, if an artist is from Wisconsin we promote in Wisconsin newspapers and hope that the thing will snowball. This is something that I have no experience with, but itâ€™s fun to play at it with such limited resources. Itâ€™s so different than promoting your own art practice because thereâ€™s a certain guilt with self-promotion. When youâ€™re promoting another artist, youâ€™re doing something great for them in addition to promoting your own work.

All photos and videos courtesy of Half Cut Tea.

Matt Glass is a photographer, filmmaker and musician from Utah with an MFA from Cranbrook Academy of Art. Mattâ€™s films are full of puppets and other oddities. His music has been featured on various television programs on NBC, CBS, FOX and more â€¦ and he likes pizza.

Jordan Wayne Long is a performance and video artist originally from Bald Knob, Arkansas. He graduated with his MFA from Cranbrook Academy of Art in 2011. His current work deals with trauma â€¦ and he loves sweet teas. 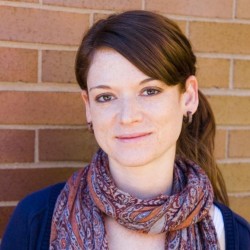