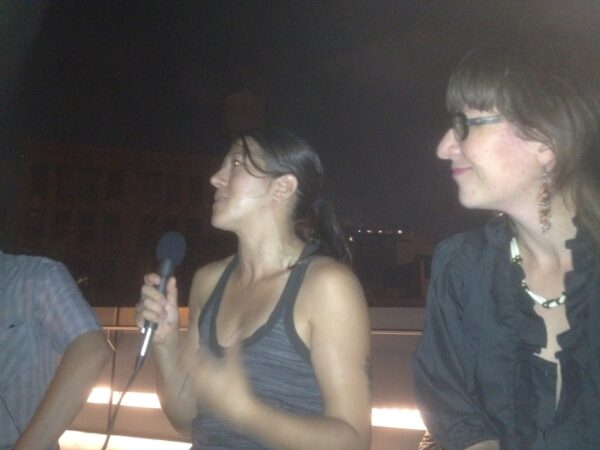 This week: The first in our series of interview we did in partnership with apexart in New York! Duncan, Amanda, and Richard talk with Stephanie Powell and James Walsh about their experiences in the apexart residency program.

apexart and Bad at Sports wrap up their season of Resident Talk collaborations* with Outbound ResidentsÂ James Walsh, who traveled to Bangkok, Thailand, andÂ Stephanie Powell, who traveled to Phnom Penh, Cambodia.Â Duncan MacKenzie,Â Richard Holland, andÂ Amanda BrowderÂ from the Bad at Sports team will conduct the interview at the Radial Bench on the High Line off the 29th Street entrance, getting to the bottom of what exactly the apexart Residency is and what James’ and Stephanie’s experiences were during their month away from their routine.

Before studying art,Â Stephanie Powell‘s initial career interest was in journalism, which has consistently challenged her to think critically about the storytelling component of her work. Stephanie is currently living in Brooklyn, NY, and is a Visiting Professor at Pratt Institute and Photography Technician at Parsons School of Design. Read more on herÂ resident page.

James WalshÂ has been making visual work in a variety of media since 1986, and has shown throughout the United States and in Turkey, Italy, England, and Sweden. He is the author of three books and numerous unique and limited-edition artist’s books. Read more on hisÂ resident page.

Amanda Browder, co-founder of Bad at Sports, is an internationally shown visual artist who lives and works in Brooklyn, NY.

Lawyer by day,Â Richard HollandÂ is the co-founder of Bad at Sports and co-host of their Chicago broadcasts.

Duncan MacKenzie, co-founder of Bad at Sports, is a Chicago based Artist / Critic / Writer / Educator / Podcaster and generally a culture enthusiast.

* Over the course of the series, the Bad at Sports team will grill and provoke apexart residents in increasingly ridiculous scenarios while talking art, residencies, the role of conversation, and the inspiration that comes with travel.Â