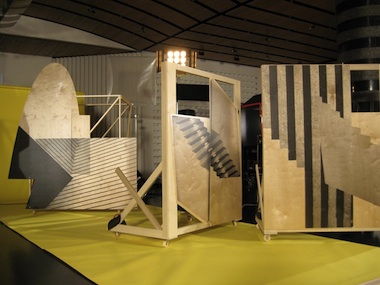 This week, Patricia Maloney chats with artist Mika Tajima at the San Francisco Museum of Modern Art just before the opening of the exhibitionÂ Stage Presence, where her collaborative film, performance, and sculptural project,Â Today is Not a Dress Rehearsal, is currently on view through October 8, 2012 .

The following is part of the ongoing collaboration betweenÂ Bad at SportsÂ andÂ Art Practical. You can read an abridged version of the interviewÂ here.

Tanya Gill, a Chicago artist living in New Delhi, wanders through the India Art Fair of 2012. Over the course of four days she spoke to Gallery owners and artists, and found a surprising number of Chicago connects. Recorded here are her conversations with Kiran Chandra, Renuka Sawhney of The Guild, artist Vibha Galhotra, artist Ram Rahman from The SAHMAT Collective,Â Laura Williams of Art 18/21, artists Joan Livingston andÂ Katarina Weslien from the School of the Art Institute of Chicago, Ritika Baheti of the Autonomous Public Laboratory Project, and four living works of artÂ by Preeti Chandrakant.