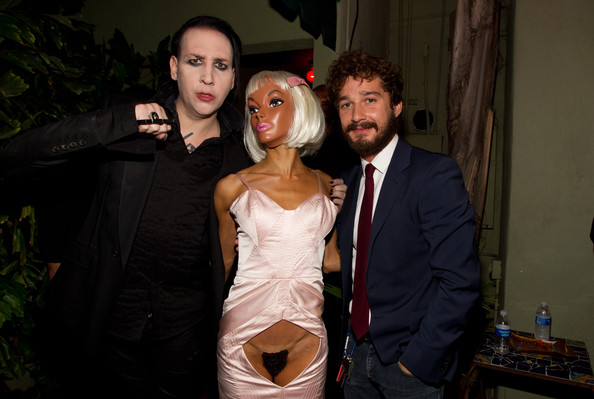 This week: Live from NADA, okay not live now, but live at the time, why do you care, oh, wait, you don’t sorry. Amanda and Richard on the radio broadcasting from 89.0 “The Shack” atÂ  NADA 2011. We interview the seriously fascinating Narcissister!

Narcissister is a Brooklyn-based artist and performer. Her formative dance training took place at the Alvin Ailey American Dance Center. Among her professional highlights was being selected to perform with the Alvin Ailey Company in Memoria, one of Ailey’s seminal pieces, touring Europe as a dancer in a German rock-opera and performing in industrial work for Mercedes Benz.

In addition to her performance work, Narcissister works in many other creative media including contemporary quilting, collage, sculpture, printmaking and photography. She has participated in studio residencies including The Whitney Museum Independent Study Program and the Art in General Eastern European Residency Program. In addition, her work has been included in group shows and media publications. Narcissister has also worked extensively as a commercial artist, designing window displays and working as a stylist and art director.

In addition being a featured performer at The Box NYC, Narcissister has presented live work at Deitch Projects, Joe’s Pub, Dixon Place, and Anna Kustera Gallery, and has starred in and curated performance shows at Santos Party House and The Zipper Factory. Her art videos have been included in gallery shows and film festivals worldwide. In Spring 2009, Narcissister co-starred in “All Made Up: Fauxnique/Monique Jenkinson and Narcissister,” a performance art show at The New Museum in New York. In Spring 2010, she workshopped “This Masquerade,” an evening-length piece at The Kitchen. She remounted “This Masquerade” at Abrons Art Center in Winter 2011. Narcissister was a re-performer of Marina Abramovic’s Luminosity piece as part of the groundbreaking retrospective “The Artist is Present” at MoMA.

Narcissister is also developing an international following. In Spring 2009 she was invited to present an evening length solo show as part of the Music Biennale in Zagreb, Croatia. She has presented work at Chicks on Speed’s Girl Monster Festival in Hamburg, Germany, at the Edgy Women Festival in Montreal, and at “The Festival of Women” in Ljubljana, Slovania. She also presented work at Warehouse 09, Copenhagen’s first live art festival, and at “Bordel Des Arts,” a performance series at Lucas Carrieri gallery in Berlin.